It ain't over for Mal Brough ... Clive's secret email account ... Greens to the rescue ...

No DPP referral for Brough yet. He has stood aside from the frontbench and announced his retirement from politics, but for Mal Brough, the Ashby-gate saga is far from over. There is still an Australian Federal Police investigation into his alleged acquisition of former speaker Peter Slipper’s diary, and in an answer to a question on notice from the last round of Senate estimates hearings, the Commonwealth Director of Public Prosecutions said bluntly it had not consulted with the AFP about criminal allegations about Brough, considered any evidence from the AFP or provided any evidence to the AFP for the Brough investigation. So, we surmise, the AFP investigation is still ongoing.

Clive correspondence. In January The Australian alleged that Clive Palmer was using the alias Terry Smith and email address “pilbera@yahoo.com” (sic) to run Queensland Nickel and get sign-offs for any purchases made by the company of over $500. Ms Tips hears that Queensland Nickel wasn’t the only organisation to receive and send emails from this account, and correspondence exists within the Department of Finance with the same email account. Know more? Drop us a line.

Another one bites the dust. Yesterday we told you that the University of Adelaide’s student union had decided to no longer pay National Union of Students affiliation fees, stripping the national student body of $17,000 a year. This followed the University of Melbourne’s union deciding it no longer wanted to pay $110,000 to the NUS, and halving that to $55,000 last year.

Tipsters say we missed a few other universities. A fortnight ago, the Australian National University’s student union also decided to no longer contribute to NUS. A statement explaining the decision posted on the ANU Students’ Association website says the SRC in late February heard reports from the five students who attended the NUS national conference on behalf of the university in December 2015:

“From the information provided in these reports and through further enquiries by members of the SRC, issues were raised surrounding the effectiveness of the NUS, its governing structure, the conduct of factional delegates at the National Conference, and the Union’s failure to implement the improvements recommended by the 2015 ANUSA SRC.”

Following this, a motion to reaffiliate on March 16 failed to get traction. In a secret ballot there were 18 votes cast in favour of breaking ties with NUS, and 12 in favour of the status quo.

The loss of ANU is another blow to NUS, which now counts less than half the nation’s university student bodies as financial contributors. Crikey hears the next decision to stop paying will likely come from the University of Wollongong, where Liberal-affiliated students won many positions at the last student elections and are expected to be hostile, as Liberal students traditionally are, to the lefty campaigning organisation. Ironically, student unions are choosing to no longer contribute at a time when many are more cashed-up than they’ve been in the past. After the lean years of voluntary student unionism, many are now flush with more cash, thanks to the Student Service Amenities Fee which universities can choose to pass on to the student unions. Defeating voluntary student unionism was one of NUS’ leading campaigns during the Howard years.

Freebie watch. A tipster recently disembarked from a cruise in Sydney and was handed a copy of The Sunday Telegraph. And not just any copy, but a “Carnival Spirit Souvenir Edition”. A wrap-around featured a note from Premier Mike Baird welcoming visitors to Sydney, a “shining jewel of a city”, along with tourist tips. Beneath the wrap was a normal copy of the paper. 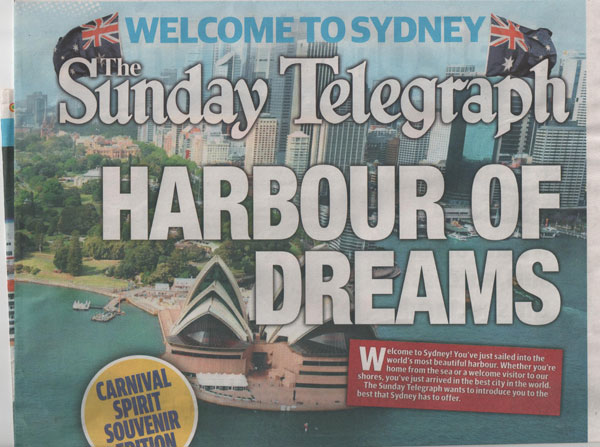 “So my query to Crikey (News Corp really), is: This ship carries 2,124 passengers. It was full, and I know that because the captain told me (bumped into him so why not ask?). There are multiple cruises leaving Sydney from this and numerous other companies and other ports every week. Some ships are much bigger. On average there’s a new cruise departing from Sydney almost every other day.”

“Is this a one-off with just one cruise company? If not (and even if it is just the one carrier), do the math and if this kind of ‘direct marketing’ insert is being done on a regular basis, does that bump up the readership/copies ‘sold’ figures for circulation purposes? It wouldn’t take very many cruises. “

It certainly wouldn’t, but it doesn’t appear all passengers on all cruises get the paper in this way, or the freebie figure would be higher than that shown in the circulation figures. Such freebies do go into the headline circulation figures, which for The Sunday Telegraph are very healthy (it sold an average of 452,377 copies every Sunday in the three months to December, audit figures showed). But the paper does have to disclose how many of the total were given away cheaply or entirely free in promotions such as these. In the last circulation figures, an average of 37,458 copies of the Sunday Tele were given away in similar situations (airlines, hotels, schools, events) every week. That’s just over 8%, which isn’t too bad a figure compared to lots of other papers.

Greens taking credit for things. A recent new resident in Adam Bandt’s electorate of Melbourne received the standard “welcome to my electorate” letter in the mail recently. In the letter, Bandt takes credit for the the $5 billion investment in dental health, which is true: it was a deal done between the Greens and the former Labor government in 2012. But the letter also includes the claim that Bandt, a federal member, prevented the East West Link from being built. Given that the only reason the Victorian government didn’t embark on the East West Link was because a Labor government was elected to state government, Bandt’s impact on the demise of the project seems somewhat limited.

Blues and Labor roots. If you are a federal MP with just a few weeks to go before election campaign kicks into full gear, what do you do with your time? Go to a boomer music festival! At least two Labor MPs were spotted at the Bluesfest in Byron Bay over the weekend. During Jackson Browne’s gig, former treasurer Wayne Swan was spotted mixing it up in the crowd, while Labor’s manager of opposition business Tony Burke was spotted in the VIP area. Once Browne’s gig was over, Burke was seen swanning with the rest of the crowd. 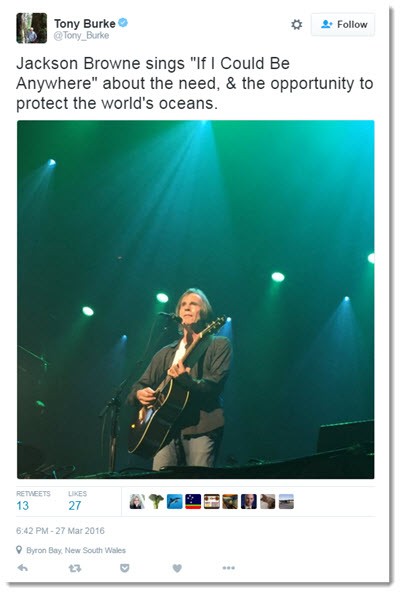 National Union of Students in chaos as accusations fly

Considering that Labor policy up to just before the election (as they’d like you to forget) was to support the East-West link and they only changed after caving to significant pressure from community groups in which the Greens were involved and more urgently the threat of the Greens to heartland state seats like Brunswick and Northcote, Bandt and the Victorian Greens are more than entitled to “take credit” for standing with the community against the East-West Link. It’s almost as if the Greens still recognise that there are paths to achieving change other than just getting people voted into parliament…

The Greens know full well that using their emotively appealing nonsense propaganda gives them extremely effective power without ever having to worry about their repeated complete failures to come anywhere near convincing most Australian Citizens to support The Greens.
They don’t even need the support they receive from the Crikey Commissariat Censorship.

I was out the back of a newsagent the other day looking for a SMH from the day before. There was just a handful of Heralds but several towers of Teles and Oz. I wonder if they count them in their circulation figures.

When I last checked the auditing process, Maureen, if the newsagent cut off a top corner of the paper it wasn’t counted as a sale, and since the newsagent had to pay for papers not dealt with in this manner, he had every reason to not cause sales to be inflated.

For Heaven’s sake, Crikeu, why on Earth did Post #4 need to be censored?