Maintain situational awareness and other terrorism tips from News Corp. Plus other media tidbits of the day.

Buy the front page for $16,000. Just how lucrative is it to give over your front page to online betting advertisers?

Before filing on the TopBetta ads appearing throughout Fairfax’s regional papers in recent weeks (to the frustration of some of its journos), Crikey called a number of media buyers to try to figure out how much that kind of advertising is worth.

We got no responses before our deadline, but a few were willing to bite in the afternoon. It turns out a front-page wrap for a paper like the Bendigo Advertiser would set a big advertiser back $16,000. Meanwhile, the inner-back page can go for under $4000. That’s assuming TopBetta, a regular advertiser with Fairfax, wasn’t able to swing a better long-term rate. — Myriam Robin

News staff given security warning. News Corp staff have been advised to “maintain situational awareness”, “note the exits” and act to prevent unauthorised visitors to the office in light of “recent world events”.

The safety advice was sent to staff this morning. “News Corp is committed to the security of all employees and in light of recent world events, we would like to take this opportunity to remind you of 3 important steps that you can take to contribute to the safety of our offices,” it states. — Myriam Robin

Food fight (part 2434). Why are restaurants so touchy these days? It’s because a flood of food bloggers happy to gush for free food has rendered those dishing it out unable to handle criticism, writes the Oz’s food critic John Lethlean:

“The flowering of the cheerleading media — the webzines, the blogs, the consumer feedback sites, the ‘influencers’ with their pay-to-play Instagram posts, the everything-is-fantastic-and-every-chef-who-ever-fried-a-chicken-wing-is-Michel-bloody-Bras-with-a-beard crowd — has created two key expectations among those who start any kind of new business selling food and beverages.

“One is that they will get coverage. The other is that it will be supportive. Sycophantic, in many cases, but certainly positive. Ra-ra.”

Of course, there are two sides to the professionalism of food bloggers debate. When hostilities broke out in 2014, Crikey polled some prominent Australia food bloggers on whether they felt they had anything to add to the culinary scene. They said in many cases, food bloggers aren’t doing reviews, but merely keeping memoirs of their restaurant visits, and so naturally the tone is very different. It was also pointed out to us that while many professional food critics don’t appreciate their barging into the industry, historically, the people who write food blogs are also been the most avid readers of professional food criticism, now given a voice. — Myriam Robin

McKenzie takes on the critics. Critics of Fairfax’s clickbait miss the company’s extensive local journalism, which goes a lot further and deeper than investigations by high flyers like Adele Ferguson, wrote The Age’s Nick McKenzie in an opinion piece yesterday. And as for the clickbait? That’s the business strategy:

“The sometimes annoying click-bait on Fairfax Media websites is about attracting a mass market and a revenue stream that will pay for the journalism described above. When I log onto The Guardian or The Huffington Post, I see similar click-bait stories. And I often read them.

“What I don’t find on The Guardian or in The Saturday Paper, but I do find in spades in The Age and the Herald Sun, is strong, vibrant local content. This is the stuff that matters to many who don’t read Twitter.”

McKenzie doesn’t think much of those who criticise Fairfax. Or of Twitter, by the by. He thinks the fact that so many pieces on Fairfax’s clickbait miss the point is “not surprising”:

“They are written by those who long ago stopped doing the hard yards of reporting. By this, I mean digging up local content for a local audience, each day, every day, sometimes even twice or thrice a day …

“We have countless columnists and media watchers who excel in schadenfreude and Twitter banter. It’s much easier to do that than daily boots-on-the-ground reporting.”

All paths don’t work. Speaking of clickbait, French media strategist Frederic Filloux had an interesting take on clickbait in his weekly note on Monday.

He wrote the problem with clickbait is that competing in the click arena acts to raise costs for publications, drawing resources away from local journalism.

“A Google News search for ‘Tay Bot’ (in reference to Microsoft’s Twitter blunder) will yield 3,720 results, and a ‘Racist Bot’ query will collect 22,600 articles. Back in the days of printed media, a topic of similar importance would have created no more than hundred articles … There is no hope of drawing sizable value from such overabundance where too many players provide the same service …

“I’m not condemning this evolution, I harbor no nostalgia for the old days. I actually think it is great to have technically savvy journalists, more connected to their audience than they used to be. I’m simply stating a mere fact: today’s pressure for producing large numbers of stories leads to their loss of value per unit. This is incompatible with in-depth journalism that requires time, persistence and vision.”

He sees three options for newsrooms trying to step off the clickbait treadmill: partitioning their newsrooms into serious and more traffic-inducing content (the way BuzzFeed does), opting for a user-pays model (which he doubts will work for most if any) or turning to philanthropists to fund their journalism (which he only thinks works in the United States).

Front page of the day. The Daily Telegraph revives a culture war … 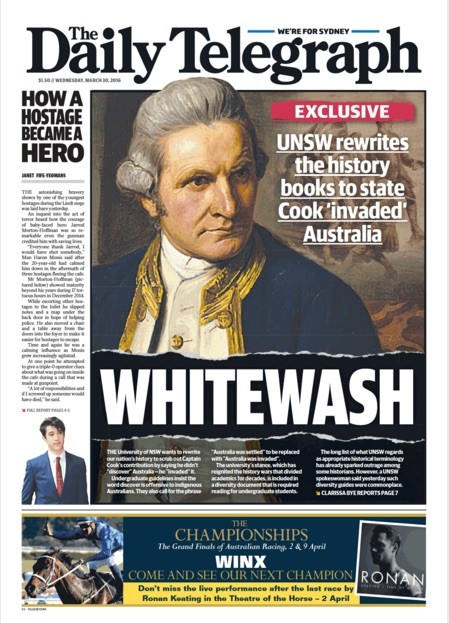 Here’s a ’cause’ as worthy as the Government Schools Teachers Union sticker Taxation is theft or the perhaps apocryphal Land Rights for Disabled Whales campaigns.