Sniping, undermining and Wolverine got people talking over a lazy Easter weekend.

A slightly less sleepy Easter week than usual. As reported here last week, it looks extremely unlikely that Senators John Madigan, Jacqui Lambie or Glenn Lazarus will flip and support the ABCC Bill, but that didn’t stop Prime Minister Malcolm Turnbull anointing Family First Senator Bob Day his point man in trying to assist just such a flip. Day has always supported the bill, so no shock there, but is it all just for the cameras, with a double dissolution no less inevitable? Many in the media have their suspicions, although some were reporting a breakthrough could be imminent. I’m not holding my breath.

The Member for Warringah Tony Abbott announced that despite not being given any formal campaigning role, he will be touring Australia to ensure the re-election of his … er, the Turnbull government, while dropping in on a teenager’s wave on the Sunshine Coast. We’re just disappointed he was wearing a wetsuit and not speedos. Cabinet Secretary Arthur Sinodinos was caught up in claims of property developer funding to the Liberal Party being channelled through the Free Enterprise Foundation, ironic given the focus on building industry corruption this week.

NSW Premier Mike Baird was up the list, mainly owing to controversial Moore Park stadium plans and discussion of new terror laws while the Sydney Siege inquiry is underway. And finally, heading back to Sydney’s northern beaches, the Member for Mackellar Bronwyn Bishop, looks to be facing an uphill battle to retain preselection after a poll was leaked showing Dick Smith beating her easily if he stood as an independent. 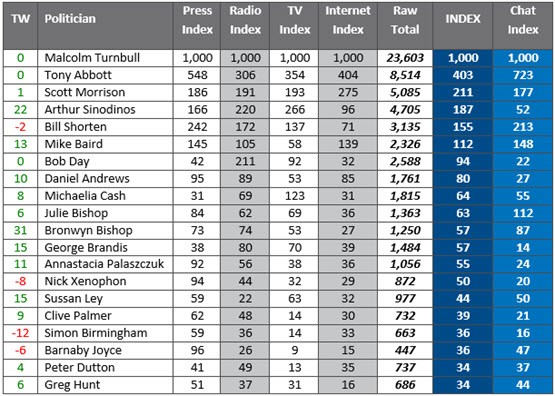 It was a two horse race in social media mentions, as it has been almost the entire time since Turnbull deposed Abbott as prime minister last September. Will anything change after July 2?

Again a two horse race on talkback, with plenty of discussion about iniquities in the building industry, election tactics and the general contribution of the Member for Warringah.

The Aussie bloke in excelsis Hugh Jackman dropped in to Bondi over the weekend to save some tourists from being swept out to sea. You bloody ripper! (pardon the pun)