When is an ad not an ad? Sponsored content riles the Addy

It takes just $16,000 to buy a four-page wrap-around to cover the front page of a paper like the Bendigo Advertiser, media buyers estimate, after the Addy carried such an ad for fantasy sports betting company TopBetta on Thursday.

Newspapers wouldn’t exist without their advertising. But Crikey has spoken to several journos who aren’t happy with the TopBetta ads increasingly appearing in the Fairfax regional and community papers. As well as the Addy and several other papers on Thursday, on Saturday, March 19, some other regional Fairfax papers (whose staff were on strike) also carried the four-page wrap-around on their front pages … 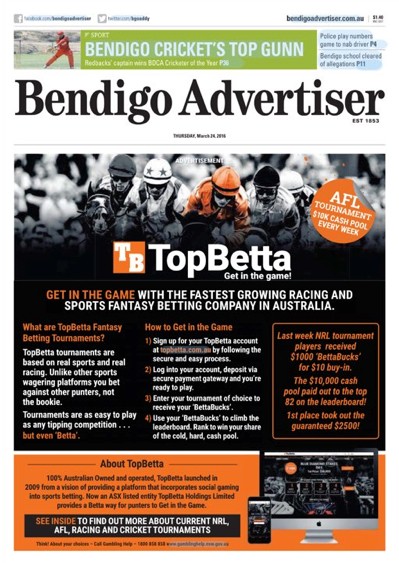 A journalist from one of the affected newsrooms told Crikey last Wednesday that the paper’s staff had been made aware of the onset at 1pm the day before, and hadn’t been given a chance to discuss it with management.

The ads have caused no small amount of unrest. They’re designed to resemble news stories, despite being labelled as a “sponsored feature”.

“No words,” wrote a Fairfax regional scribe on Twitter while sharing the front page, which many of his colleagues retweeted, apparently sharing the sentiment.

“We’re all community newspapers,” another Fairfax staffer told Crikey. “We cover country areas, where there is such a huge proportion of problem gamblers, and we have specific knowledge of the damage gambling does in our towns and cities.”

The front pages are only the latest advertorials to appear in regional papers. Every Thursday, Australian Community Media papers (Fairfax’s community and regional arm) around the country carried full-page ads from TopBetta on their inner-back pages. The advertorials are tailored to the sports in each state, and look, to all intents and purposes, like news articles. A picture at the top of the regular “Fantasy Land” banner looks like a journalist’s head shot at the top of the column. Only the page isn’t “by” a journalist, but “with” Todd Buckingham, the CEO of TopBetta. Crikey asked several media buyers how much revenue this would bring in, and most estimated just under $4000 per regional paper, based on standard market discounts (perhaps TopBetta, which has an ongoing relationship with Fairfax, is able to swing this more cheaply). 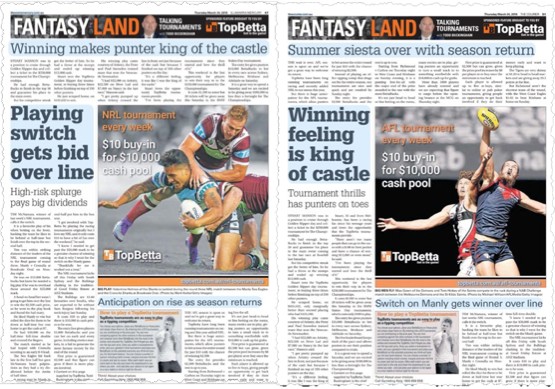 Fairfax’s regional papers have been heavily targeted for cost-cutting in recent years, and with the ads bringing in revenue, such advertorial will probably only proliferate.

“After gutting our newsrooms, this appears to be the latest money-making tactic from ACM,” a journalist said. “Expect more of the same.”

When is Crikey’s refusal to launch a campaign which tightens the relevant rules not a refusal?
That’s an easy question to answer, so naturally Crikey won’t address it.

Has anyone noticed the number of gambling adds now appearing on YouTube as well…. Almost on guaranteeing a win…. Like the happy smiley people in casino adds… A far cry from the misery and drunkenness within.

There are politically active taxpayers out here, who want to publish a question to MP Barnaby Joyce so everyone can be aware of what’s being asked. Fairfax insist publishing such a question about the Nationals Leaders failure to approach the Privledgies Committee with a request for a ruling on the findings of the TURC RC. Which are opposite to what Gillard told the Federal Parliament, and journalist several times. Must be headed as ADVERTISING not paid announcement even though we are not selling a dam thing! Promoting gambling as “news” is not a good look Fairfax, Edward James

They are so desperate for the shrinking corporate advertising dollars these days that it becomes an issue of what’s “not” an advertisement.

Souls are easily bought for money.

Well packer has bought the entire NSW government so I guess the likes of TopBetta have to buy up what’s left.