DJ Dasher makes his comedy debut. On Sunday night a lucky audience was treated to the comedy stylings of Labor Senator Sam Dastyari. It wasn’t another Senate all-nighter, but instead the New South Wales Labor Senator’s guest appearance on the live recording of The Little Dum Dums podcast as part of the Melbourne International Comedy Festival.

Despite the fact that many in the audience — and at least one of the two hosts — did not know who Dastyari was, his jokes were warmly welcomed. Dastyari described himself as not a fan of the podcast, but aware of the podcast. The hosts said they felt the same about Labor. At the end of the show when asked to plug their gigs, Dastyari mentioned July 2 as his next gig. Host Karl Chandler said he would have to google that to figure out what that meant. 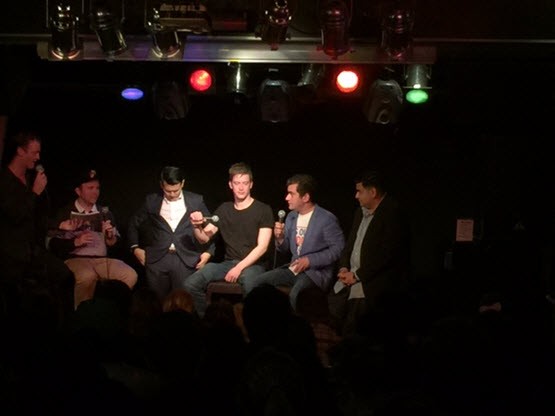 Dastyari was sporting a vintage “It’s Our Ruddy Future” 2013 campaign T-shirt on stage, and if you’re wondering what merch the 2016 election will bring, Dastyari may have given some hints. He promised the audience that he would wear a Little Dum Dums T-shirt in a future press conference — though something tells us the higher-ups in Labor probably won’t be too pleased with the optics of Dastyari wearing a T-shirt with “Little Dum Dums Club” emblazoned on it. If this, and his upcoming DJ gig with fellow Labor politician Tim Watts is anything to go by, Ms Tips is expecting DJ Dasher will have a more interesting election campaign than the usual shaking-hands-and-kissing-babies routine.

Another union questions NUS feels. The University of Adelaide student union voted last week to cease all payments to the National Union of Students, saying the money was spent by “left-wing student hacks to jet-set around around the country and play Prime Minister”.

The motion’s passage will strip NUS of $17,000, Adelaide student rag On Dit reported over the weekend. It’s not clear if the uni will be de-affiliated with the peak student body, as the body officially linked to NUS is the Adelaide Uni Students Representative Council (which is an activist body but does not control finances). The SRC strongly opposed the motion, citing NUS’ successful campaign against university fee deregulation as proof the NUS represented student interests.

“The Young Liberals on the AUU board want to undermine the organisations that students have to resist, so as to clear the path for the Coalition government to pursue an anti-student agenda,” SRC president Tom Gilchrist said in a statement to On Dit.

Affiliation fees to NUS have come under scrutiny in recent years. Last year, Melbourne University’s student union halved the amount it was willing to pay the body (to $55,000) after concerns the union was paying too much. What NUS charges each university is not transparent, and the amount differs widely from university to university depending on the size of the student body and its relative wealth. Last year, the body rejected a request from Melbourne University’s union to produce a list of its affiliate unions and what they pay in fees, citing “commercial-in-confidence” considerations, according to Farrago.

More jobs for the boys and girls. We have previously raised questions about the appointment of former Liberal staffers to the Administrative Appeals Tribunal. Attorney-General George Brandis is at it again, it seems. On Thursday, as everyone was preparing to leave for the Easter long weekend, Brandis announced another a flurry of appointments and reappointments to the AAT. Included in the list is Bennie Ng, who had been Tony Abbott’s head of social policy when Abbott was prime minister. There is also Anne-Marie Elias, self-described “Chief Disrupter”. Elias, unlike other appointments, has worked outside of politics, for Fishburners, but a good portion of her work history has been working for Liberal NSW minister Andrew Constance and a former Liberal opposition leader. Elias did get snapped with Labor’s Ed Husic at last night’s Q&A episode on innovation, though.

The government rushing to make a number of appointments before the election is starting to concern Labor. Over the long weekend, shadow treasurer Chris Bowen wrote to Treasurer Scott Morrison asking for him to consult Labor on any appointments made in his portfolio between now and the election, whenever that happens to be (July 2). Morrison announced last week that he had renominated ACCC chair Rod Sims for his job to commence on August 1, probably after the next government has been sworn in.

Space cadet Abetz. The self-appointed commander in chief of the group of hard-right Liberals Peter Reith refers to as the del-cons (that is delusional conservatives), Eric Abetz, was the subject of a fascinating profile in Good Weekend over the Easter break doing his best impression of the martyr the holiday celebrates. One particularly amusing anecdote was about Abetz in 2009 using Canberra’s Deep Space Communication Complex during National Science Week to send a message to Gliese 581 g, a distant planet that might support life, to score a political point. Abetz wrote:

“The Coalition dreams that by the time you receive this message in 2029 Australia will be free of Labor debt. Sadly we’re not holding our breath.”

This was probably the most-shared portion of the profile on Abetz on Saturday, but it turns out that it might not be strictly true. While Abetz might have written that message, it will never reach alien life forms, because the astronomer who vetted the messages said it had never been received or sent by the agency. Strewth’s James Jeffrey reported at the time in 2009 that while Abetz did indeed try to warn the aliens about his political opponents, the message was rejected by the moderators.

Jason Clare seeks Facebook likes. A tipster points out to us that Jason Clare has a few interesting ads on Facebook at the moment seeking more likes for his page focused solely on Turnbull and his NBN policy. 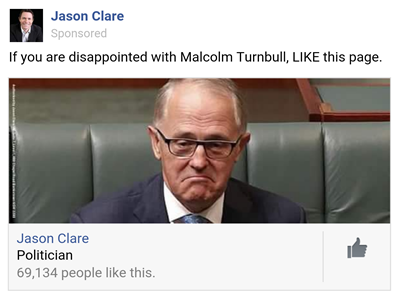 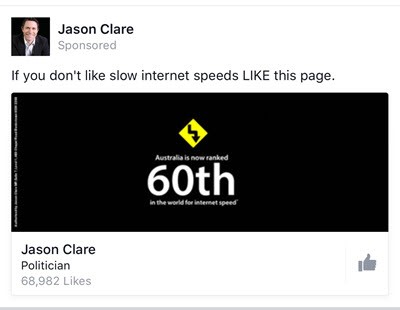 Perhaps the public can learn from this page what Labor would do to fix the NBN if they win government? Not just yet, it seems. Meanwhile, Victorian Opposition Leader Matthew Guy seems to take a somewhat different approach to seeking likes on Facebook. 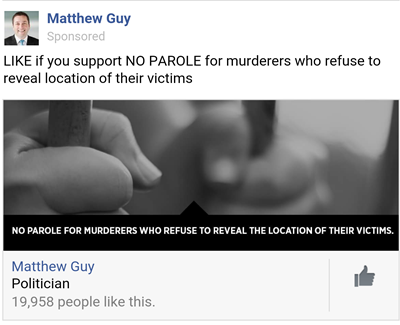 If Sam Dastyari does as good a job in comedy as he has done in the ALP, then comedy faces a bleak future and will only survive with significant contributions from the Union Bosses.

Mathew Guy, who single handedly turned Melbourne’s CBD into a high rise slum of the late twenty-first century and ensured his pet developers would turn useful farmland into squalid, overbuilt, treeless people barns, has no right to criticise anyone, any where or any time. That the state Liberal party chose to make him the shadow premier reveals the abject moral poverty of the Liberal Party.

The self-appointed commander in chief of the group of hard-right Liberals Peter Reith refers to as the del-cons (that is delusional conservatives), […]

Where does one find a non-delusional conservative ? I’ve yet to find a single one whose views stood up to analysis and evidence (and that’s before even getting into ethics and morality).

drsmithy, the delusional Faux Progressives have assisted the Coalition causes far more than you understand. Were you less emotively-blinkered you might realise this, so it’s little wonder that you [like the Crikey Commissariat and its camp followers] fail to know what’s happening around the Planet. Hopefully, optimist that I am, you’ll grasp the concept of ethics.