What does employing journalists have to do with producing a quality newspaper fergodssakes? Greg Hywood wants to know. Plus other media tidbits of the day.

Media chiefs defend legacies. Fairfax’s newsrooms are bigger than they were 25 years ago, CEO Greg Hywood wrote in the Fairfax metros over the weekend, in the latest attempt to address persistent criticism over job cuts and accusations of declining quality at company’s flagship mastheads.

In January 1976, he wrote, the Financial Review had 25 journalists and managed to be the country’s pre-eminent financial publication. These days, it employs has five times that number:

“So when the cry goes up about Fairfax Media giving up on quality journalism because we are reducing staff numbers I am incredulous. Since when has quantity got to do with quality?”

As to whether Fairfax relies too much clickbait, Hywood says that trashy content has always existed, particularly as the papers swelled to accommodate advertising in the 1970s and 80s. He added that the company was still investing in quality journalism, citing the awards it won as proof:

“At no time in Fairfax Media’s long history has the company devoted more resources and support to this area. That won’t be changing.”

The SMH and Age house committees have publicly released a letter in response saying they’d love to speak to Hywood about quality journalism.

“In 2016, our reporters are busier than ever. Instead of one print product a day, we file throughout the day for our websites, apps, mobile, social media channels, Apple Watch ­ and print, including many supplements that weren’t around in 1976.

“What worked at the AFR 40 years ago has no relevance to the fragmented audience we now face. If we don’t give our readers and viewers original, quality journalism ­ right now ­ they’ll leave and get their news somewhere else. It’s that simple. And with that audience goes our chance to make money in the other parts of the business that depend on traffic from our journalism, such as Domain and events. Our newsrooms face this dilemma every day.

“We’ve changed a lot in the past 40 years. Management needs to keep up. Old school thinking and nostalgia won’t cut it in the new media landscape.

Hywood wasn’t the only one defending his legacy over the weekend. In a 20-minute interview with Media Watch (cut for broadcast, but the full thing is online), outgoing ABC managing director Mark Scott said it wasn’t the ABC’s fault that quality mastheads had trouble convincing readers to sign up to paywalls, as free websites like The Daily Mail and The Huffington Post were greater competition than the ABC.

This follows persistent criticism (mainly in News Corp’s papers) that the public broadcaster, with its guaranteed funding and lack of commercial considerations, was making it impossible for commercial publishers to compete online. The ABC has the third most-popular news website in Australia, according to Nielsen, and its figures have improved in recent years.

Scott also warned that jobs would go if the ABC’s funding were not maintained in the latest funding round (to be revealed in the federal budget — as Crikey has previously reported), and when asked how he remained so calm despite the pressures of the job, said he had “a complex relationship with [his] cat”. — Myriam Robin

Politicians use backgrounding to lie to the public. Former Age editor-in-chief Michael Gawenda has some thoughts on the New York Times’ new anonymous source policy, and how the lessons there should apply to Australia:

“There is something seriously wrong with the rules of engagement when politicians can say one thing on the record and then say the opposite anonymously and get away with it. To allow this to stand is to put journalists in a position where they have to report things they know are not true.

“The rules of engagement need to be changed. When politicians make statements that contradict what they have told journalists off the record or in background briefings, the granting of anonymity should no longer stand.

Correction of the day. Whoopsies. On Friday The Sydney Morning Herald carried a three-year-old obituary of Things Fall Apart author Chinua Achebe, which appeared in The New York Times directly after his death in 2013. Weirdly, the first paragraph of the obituary, which included how old Achebe was (a detail that clearly would have shown the obit to be out of date) was amended in the SMH version to take out Achebe’s age. The Times piece began:

“Chinua Achebe, the Nigerian author and towering man of letters whose internationally acclaimed fiction helped to revive African literature and to rewrite the story of a continent that had long been told by Western voices, died on Thursday in Boston. He was 82.

“His agent in London said he had died after a brief illness. Mr. Achebe had used a wheelchair since a car accident in Nigeria in 1990 left him paralyzed from the waist down.”

“Chinua Achebe was a Nigerian author and towering man of letters whose internationally acclaimed fiction helped to rewrite the story of a continent that had long been told by Western voices.

“He died after a brief illness. Achebe had used a wheelchair since a car accident in Nigeria in 1990 left him paralysed from the waist down.”

The paper included this correction yesterday: 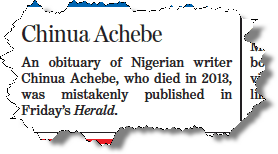 Human headlines. The Herald Sun’s new ad highlights the paper’s young journos, and their commitment to the company, by painting their headlines on their faces. 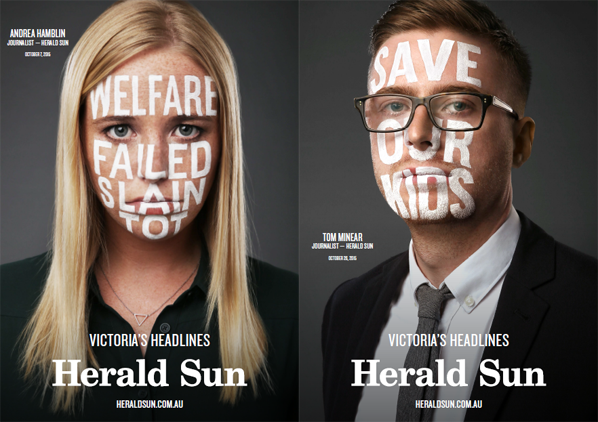 According to the accompanying press release, more than 30% of the Herald Sun’s journos are under 35. Herald and Weekly Times executive general manager Peter Clarke said in the release:

“It’s time to offer people a fresh way in to the brand and we think using our young talent and emblazoning their headlines on their faces differentiates this from other campaigns, delivers impact and showcases their passion.”

Front page of the day. Unsurprisingly, the Townsville Bulletin is all in favour of the pointy end of Queensland breaking away from those city slicker southerners in Brisbane. 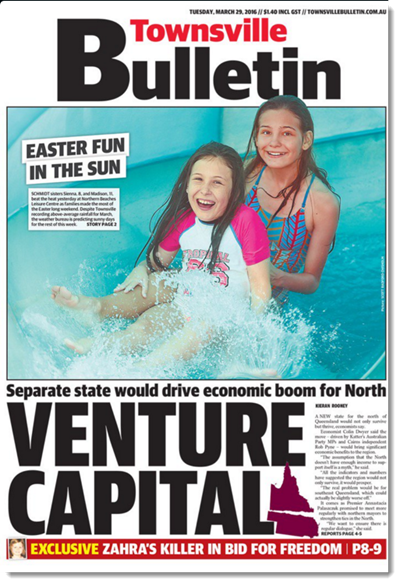