The Business Spectator is breaking up. And other media tidbits of the day.

One more year. Fairfax CEO Greg Hywood has assured readers that his company remains committed to print — for the year, at least, according to comments paraphrased by the ABC’s 7.30.

“I can’t say that newspapers are forever,” he said. “My commitment, having started here at the age of 21, is to make sure that quality journalism survives, that we actually do deliver that public good, but that involves really quite dramatic changes about the model under which we operate.”

Fairfax, he added, was “not a clickbait company”. “It’s all about quality journalism.”

Fairfax’s publications have, in recent years, emphasised online coverage over that in print, putting stories up when they’re ready rather than waiting for the print publication to make a splash the next morning. The company has also moved print production to rural areas where it’s cheaper, necessitating earlier deadlines. This appears to have been a factor in the print edition of today’s Financial Review — while both The Age and The Sydney Morning Herald splash with news of a bombing in Brussels overnight (news of which broke here at about 7pm), the Financial Review print edition has nothing on the topic. — Myriam Robin

Business Spectator stable break-up. Two deals this morning mean the mini-empire that Kim Williams acquired when CEO of News Corp in 2012 is being unwound.

Paul Clitheroe — a former financial adviser, TV journalist (Money on the Nine Network) and winner of the 2015 Sydney to Hobart yacht race on handicap — controls Australasian Wealth. It bought the Eureka website and email newsletter which will be added to InvestSMART and Intelligent Investor. The sale price was not disclosed. Business Spectator remains at News Corp in a very diminished form inside The Australian where the so-called spectators — Robert Gottliebsen, Stephen Bartholomeusz and Alan Kohler — jot daily or occasional commentaries. A newsletter is sent twice a day to subscribers. Its future is unknown.

News Corp staff told Crikey this morning that their understanding was that Eureka Report‘s analysts would go with the new owner. The publication employs only one journalist, who may stay with News Corp.

Eureka Report is an expensive subscription product, and it was no doubt hoped that it would provide a handy revenue stream to its new owners when bought in 2012. However, News Corp accounts leaked to Crikey in 2014 showed that in the financial year after the sale, it added only $671,000 in operating income (and Business Spectator lost $2.5 million).

In comments to The Australian, Clitheroe said Eureka Report‘s subscription base has little cross-over with his own publications, but that the different titles would complement each other well in the same stable.

The other part of the 2012 sale, Business Spectator, is in the process of being fully integrated into The Australian, Kohler wrote this morning:

No regrets: we did well out of the sale in 2012, AWI is a well-run, ethical company and Business Spectator has been an important part of The Australian’s success in the business media category over the past few years, as intended.

He also reflected on the changing media landscape. In 2005, Business Spectator had launched as free website. But declining ad rates now made that impossible to sustain, hence it was behind The Australian‘s paywall. Kohler wrote:

“The basic, no frills CPM rate for a digital ad is now $2 (per thousand page impressions) and big partnerships are almost dead … a journalist needs 200,000 clicks per day to pay for a salary of $100,000 … advertising has become commoditised …

“[I]n the absence of enough advertising revenue to pay the costs of the business, consumers have to be asked to pay directly.”

Poor planning at News Corp HQ. Thanks to a report on a US entertainment website we learn of an embarrassing stuff-up by the supposedly clever folk at the US arm of the Murdoch clan’s media empire. Heat Street is the name of the new conservative news and discussion website that Fox News/News Corp’s is establishing to be run by former Conservative UK member of parliament, Louise Mensch.

But as Roger Friedman’s Showbiz 411 reported this morning, someone has already called dibs on the URL heatstreet.com. It “belongs to a piercings and clothing shop in South Carolina”.

The right-wing website was due to link to News Corp papers and sites around the world — such as The Australian — that way the writing instructions could be issued in story form directly to the folk toiling away in the colony, rather than having the News Corp hacks trawling through the various right-wing blogs and columns linked to Fox News, The Wall Street Journal, The New York Post and The Times and The Sun in London. — Glenn Dyer

Front page of the day. As the world digests another terrorist attack, the Daily Star keeps things light … 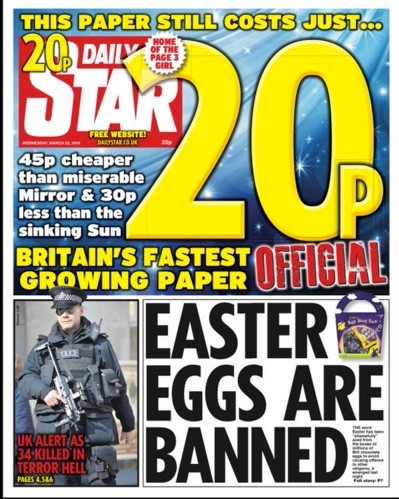 With Crikey as an example of what passes these days for a serious media entity, we needn’t worry too much about whether standards are going to fall, as it has happened already.