Turnbull kicks off the pollie-watching season, Jamie Oliver goes all nanny state and Barnaby Joyce gets talkback callers riled up.

Terrorism may dominate political discussion in the days to come, but for the seven days before Brussels, it was all parliamentary procedure. Prime Minister Malcolm Turnbull was a mile ahead after announcing he has prorogued parliament to return for three weeks to vote on the ABCC bill, specifically announcing there will be a double dissolution election on July 2 if it doesn’t pass. The question of whether the rest of the country is quite as excited about the prospect of the siege of Stalingrad that lies ahead of us until midyear’s day is another matter, although of course we had a similar situation at the last election with Julia Gillard announcing an election date more than 6 months before it happened, even though Kevin Rudd moved it by a week after his re-assumption, showing us all who was really boss, right?

The eventual passing of the Senate voting reforms and the PM’s announcement pushed almost all of the Senate Independents into the top 20, with Jacqui Lambie and Glenn Lazarus publicly maintaining their strong opposition to the ABCC legislation, and while John Madigan (21st on our list) is no longer officially DLP, you would imagine hell would have to become mighty chilly before he would vote for it, meaning the July 2 date looks all but locked in. And while we have already seen in the past seven days what lengths people will go to when faced with their own imminent political demise, you get the feeling Lambie and Lazarus fancy their own chances in a Double D. Family First Senator Bob Day on the other hand is facing the Xenophon whirlwind and is therefore leading the charge to the High Court to try and knock off the voting reforms.

The only other big movers on the list were Education Minister Simon Birmingham and government backbencher George Christensen, as Birmingham made a raft of changes to the Safe Schools program after intense pressure from Christensen and other social conservatives in the government. Former PM Tony Abbott also came out against the program which commenced while he was PM. 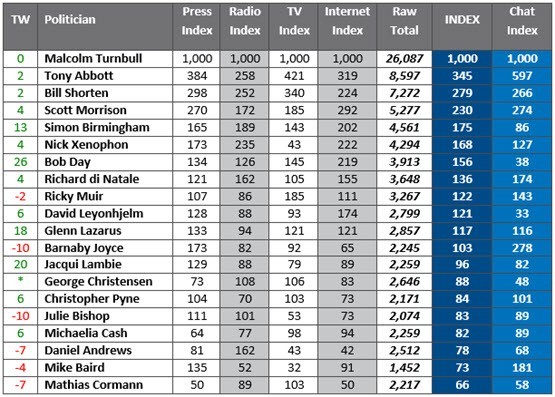 No real surprises in the social media list — it was actually pretty close to the traditional media relative numbers. You’d almost think news organisations tweet a lot these days.

Talkback, however, remains a different beastie, with Deputy PM Barnaby Joyce still well in the mix as he prepares to face Tony Windsor.

Ah, the sweet cheeky lad from Essex doesn’t like our sweets, or at least doesn’t like our government not having a tax on sugar like the one just introduced by British PM David Cameron’s conservative government in the UK. Strange, as we are usually much more of a nanny state than Europeans … but is Britain really Europe anymore? We’ll find out soon enough.

I can’t quite see what Lambie or Lazarus would gain if they’re reelected in a double dissolution. If they’re reelected, they’d be in the last six senators elected, meaning they’d have a 3 year term and would have to face election at the same time as is currently the case.