Belgium terror attacks: what we know so far

The Zaventem airport was rocked by two explosions shortly after 8am on Tuesday morning, and another followed only an hour later in a packed subway car at the Maelbeek underground train station.

Michel spoke in a news conference calling the attacks “violent and cowardly”.

“I would like to stress that in this tragic and dark moment for our country, I call for calm and solidarity,” he said. “We are facing a difficult time, but we have to all face this unified as one, with solidarity and unity.”

He added that additional security measures had been taken, including raising the country’s terror level to the highest it’s ever been, bringing in extra military personnel, and tightening border controls and security on public transport.

Belgian anti-terror police have also found a bomb and an Islamic State flag during country-wide raids last night as the manhunt began and focused on a suspect seen running from the airport building after the twin suicide bombings.

Police have issued a warning to the surviving suspect and released CCTV footage showing images of him walking beside two others who appear to have blown themselves up moments later.

“A photograph of three male suspects was taken at Zaventem. Two of them seem to have committed suicide attacks. The third, wearing a light-coloured jacket and a hat, is actively being sought,” federal prosecutor Frederic Van Leeuw said in a statement. Suspect names and photos are already being circulated by police and Belgian media.

Islamic State has claimed responsibility for the attacks, which occurred just four days after the arrest of Salah Abdeslam in Brussels, the prime surviving suspect in November’s attacks in Paris that killed 130 people.

Van Leeuw said it was still “too early to make a direct connection between the attacks in Paris [in November] and today’s attacks”. Islamic State’s claim of responsibility has not yet been formally verified, he said.

As evening fell, a candlelight vigil was held at Place de la Bourse in central Brussels.

Here’s how media outlets in Australia and around the world have been covering the attacks: 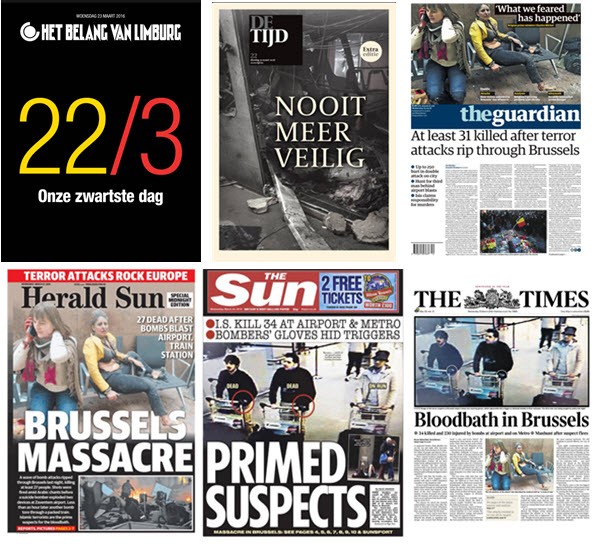 The Herald Sun this morning reported there was no news of any Australians being injured in the blasts, and that Malcolm Turnbull had discussions with Australia’s national security experts and decided not to raise the terror threat level.

“‘We are in a much stronger position from a security point of view (compared to) Brussels,’ Mr Turnbull said. ‘The reality is, of course, that we have the benefits of geography.'”

Aunty’s coverage is widespread, but this morning ABC News wrote about the solidarity with Belgium that world leaders are showing, including Prime Minister Malcolm Turnbull and his counterparts in the UK, France and the US — David Cameron, Francois Hollande and Barack Obama, respectively.

“The 28 EU leaders issued a rare joint statement saying they would combat terrorism ‘with all necessary means’ after what they called ‘an attack on our open democratic society’.”

In true New Yorker fashion, the attacks have been given their own feature piece, painting the picture with literary flourishes and wide background information.

“Inside, amid pools of blood and rubble, there were detached limbs scattered on the floor. The force of the explosions had caused ceiling panels to come off; they covered the dead and filled the hall with dust. Survivors screamed. Many were soaked in blood — some of it their own, some belonging to those around them.”

If you want to follow the live coverage, several media outlets, including The Guardian, Al Jazeera and Politico Europe are continuously updating their dedicated Brussels blogs.

Signs of hate, signs of peace as climate protesters stream into Paris

Tips and rumours: war, what is it good for?

China confronts its own Islamic terrorism

A Mormon missionary (we are told) Mason Wells, was one of the Americans wounded in the Brussels explosions. His mother told NBC News that her son had also been at the Boston Marathon when a bomb was set off and killed three persons. He was also, said his mother, in Paris last November when the city was attacked by terrorists.
What do you think the odds are on that being a coincidence?

Instead of worrying about conspiracy theories, James, Governments around the world which aren’t assisting Fundamentalist terrorists should [with the backing of capitalist media entities such as Crikey] be working together to minimise the increasing Terrorist threats, shouldn’t they.

Norman, I was merely quoting what the victim’s mother was saying and raising the question of the mathematical improbability of her son being innocently caught up in three attacks in three different countries. Nothing conspiratorial about that. You obviously see conspiracies behind every bush, and then refuse to acknowledge the real ones when they occur.

I agree that more should be done to reduce the threat of terrorism. A good start would be to stop attacking other people’s countries and thus inviting blowback. Another good policy would be to stop trying to effect regime change because we, or the country we follow blindly to the gates of hell, doesn’t think the existing government is compliant enough.

There is much else that could be argued, but hopefully that should be enough to encourage you to remove your blinkers and see the world as it really is, rather than the fantasy bubble you obviously inhabit.

James O’Neill, I learnt as a youngster the difference between coincidence and causality, so even when (as is the case with you) a mother raises it, I wouldn’t waste time referring to it. If you have a different perspective you may of course still believe it’s relevant to have quoted her. Conspiracy hardly fits this case, does it?
If you care to quote a “real” conspiracy which you believe is relevant, please do so a.s.a.p.
As for the “real world” you mention, apart from being a participant in it since I was a youngster, when I enrolled in related courses at Sydney University, lecturers often encouraged me to take on more studies including highly regarded Professors who after reading my first essay in their courses felt my efforts good enough to publish in relevant journals. This may help you realise why your lack of support does little more than invite a quiet chuckle.

More patronising BS from you Norman. If you want to compare supportive comments on Crikey I will happily match you any day.
You should have taken your professor’s advice and done more studies. I did, and had a lengthy academic career as a partial result.