The government has consistently lied about the ABCC -- it didn't increase productivity and more workers died on its watch. Time for the facts.

There was an interesting moment — well one of many — during the Prime Minister’s interview on 7.30 last night when Leigh Sales pointed out to Turnbull that his claim that the John Howard-era Australian Building and Construction Commission “improved productivity by 20 per cent” in the construction industry was inconsistent with the findings of the Productivity Commission.

What did the PC say about construction industry productivity? It examined the issue in its Public Infrastructure Report in 2014.

“Productivity growth in the Australian construction sector has ebbed and flowed over the last 30 years. There was a significant increase in labour and multifactor productivity from 1994-95 to 2012-13. However, most of the improvement was concentrated in relatively short bursts spanning just a few years, including most recently in 2011-12.”

That year, 2011-12, is, of course, after the Howard-era ABCC was, in the words of the former ABCC head John Lloyd, “neutered” by the Rudd-Gillard governments. Mysteriously, productivity in the construction industry surged after the ABCC was “neutered”.

Turnbull dismissed the work of the Productivity Commission: “I think you’ll find that’s not right,” he told Sales. She pointed out she had the PC report right there on the table. “Well I’m sure you do,” Turnbull purred patronisingly. He went on to cite the reports of “Independent Economics that show there was an increase in productivity following the introduction of the ABCC”.

Independent Economics is what the firm Econtech now calls itself. Econtech was the bespoke modeller for the Howard-era ABCC and its work was lauded by Howard government ministers for proving the case for the ABCC. Except its claims about the former ABCC have been discredited.

In 2007, Econtech produced a report for the ABCC purporting to show a 9.4% surge in productivity in the construction industry due to the ABCC. But its methodology and data were badly flawed; in fact, the “surge” was 1.3%. A year later, an “updated” report was released by the ABCC from Econtech that quietly abandoned the claim of a 9.4% productivity rise. And in 2009, in a review of the ABCC by former Federal Court judge Murray Wilcox, Wilcox slammed the 2007 report, saying “it ought to be totally disregarded”. 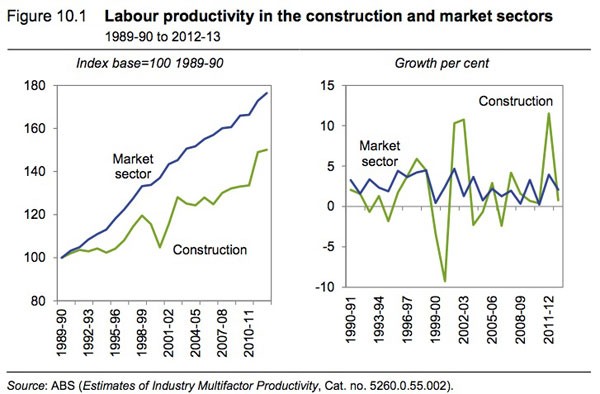 And where did Turnbull’s claim of a 20% rise in productivity come from? He appears simply to have invented that — it’s a figure more than twice as large as the Econtech claim that was demolished. The nearest number anyone can find to back up Turnbull’s claim is a recent report from the Master Builders’ Association, which claims productivity growth of 18.8% — but that report admits that only 11.4% of that can be attributed to “improved work practices”. Attorney-General George Brandis repeated the claim on Lateline, saying “when the ABCC was in operation productivity within the property sector increased — the construction sector, I should say, increased by 20 per cent. Since the abolition of the ABCC, productivity in that sector has flatlined”.

As the PC shows, in fact the exact opposite is true.

In his letter to the Governor-General yesterday, Turnbull referred to his actions as “promoting workplace safety through taking strong measures to deal with widespread and systemic criminality in the building and construction industry”.

Again, the opposite is true. Under the Howard-era ABCC, workplace fatalities in the construction sector rose from just over three per 100,000 workers to nearly five per 100,000 workers before falling again to around four. After the “neutering” of the ABCC, the fatality rate fell to just over two. Getting rid of the ABCC coincided with a significant fall in the number of workers being killed on building sites.

There’s another way in which Turnbull’s statement to the Governor-General isn’t true, as well. Despite the impression given by the government, and despite its Stasi-like powers, the ABCC isn’t an anti-corruption body; it has no criminal enforcement powers of any kind. The current iteration of the body, the Fair Work Building Industry Inspectorate, has no criminal enforcement powers and merely pursues civil penalty offences, and that won’t change under the ABCC. The ABCC has no remit to pursue “criminality in the building and construction industry” — that’s a matter for the police and other law enforcement bodies.

It’s almost as if the Prime Minister misled the Governor-General.

The rich irony of yesterday is that while the Prime Minister was declaring that he was prepared to go to an election on the issue of “criminality in the building and construction industry”, the CEO of the Australian Stock Exchange, Elmer Funke Kupper was resigning in response to allegations relating to a massive bribe to the head of the Cambodian regime, Hun Sen. And then there are the continuing revelations about the scandalous behaviour of the Commonwealth Bank in relation to insurance, and the open clash between business figures and the head of the Australian Securities and Investments Commission over toxic corporate cultures.

Given that corporate scandals can involve hundreds of millions of dollars, the lost life savings of tens of thousands of Australians or the vast destruction of shareholder wealth, you’d think ASIC would have the same powers as those proposed by the government for the ABCC.

In fact, the ABCC’s powers will far exceed those of ASIC. ASIC can’t direct you not to tell anyone you’ve been interrogated by them, but the ABCC can. You don’t have to disclose to ASIC matters covered by legal professional privilege or public interest immunity, but you do have to to the ABCC. You can claim legal expenses if you’re interrogated by ASIC, but not by the ABCC. And with ASIC, you can choose your own lawyer while being interrogated, whereas the ABCC picks your lawyer for you. And these sorts of coercive powers can be used by the ABCC as a first resort, with no external approval — unlike for ASIC.

Seems that when it comes to coercion and regulation and basic legal rights, what’s important for business people doesn’t apply to CFMEU officials.

The magical productivity of the construction <br>industry

Sorry, Mal, here’s proof the ABCC was not good for productivity

When will the Labor Party make these arguments? Same as the lie concerning Labor vs NLP spending and taxing as a percentage of GDP.

… “How long will the Limited News Party be in government?”?

This is all about knowing what you want to do – dissolve both houses of parliament and inventing a case to support it. If Turnbull’s interview last night is anything to go by, the case to support it is flimsy at best. The opposition, the union movement, and smart journalists out there should use every hour of the long election campaign to expose the holes in it. For the average punter, however, a campaign for a ABCC (a what?) will be a huge yawn.

Well, knock me down with a feather – the LNP making up numbers to suit themselves, what a surprise.

Almost everything Malcolm said about the NBN when he was Communications Minister has proved to be incorrect, they’ve been caught out and have had to admit that the costs they claimed for the Labor version of the NBN were just made up.

Given the lies they told before the last election, you’d have to be a mug to believe anything an LNP politician says.

What a pity that truth, accuracy & honesty are required in advertising and most commercial interactions with the mug punter except one field of ..err.. “endeavour”.
The pollies specifically EXCLUDED and granted themselves immunity from any comeback for a career built on lies & deception, aided and abetted by mudorc and his minions.