Muir to go it alone? Minor parties across the country have been spurred into action by the government teaming up with the Greens and Nick Xenophon to pass the Senate reform laws designed to get rid of the “feral” crossbenchers unleashed on Australia at the last election. It’s previously been reported that progressive minor parties would be targeting the seat of Melbourne, held by the Greens, and seats like Batman, Grayndler and Sydney, which are seen as vulnerable Labor seats that the Greens want. The idea of a double dissolution election has encouraged many minor parties to look at how they could get themselves to the quota of 7.7% — a lower quota than the circa 14% needed for a half-Senate election. Ms Tips hears that Motoring Enthusiast Party Senator Ricky Muir, who has acted more as an independent since falling out with sections of the party within his first months in office, could be following his fellow crossbenchers Jacqui Lambie and Glenn Lazarus in moving to start his own eponymous party before the election. Muir’s been carefully cultivating his image as the “everyman” in Parliament after a shaky start in 2013 — could it get him over the line again? Watch this space. 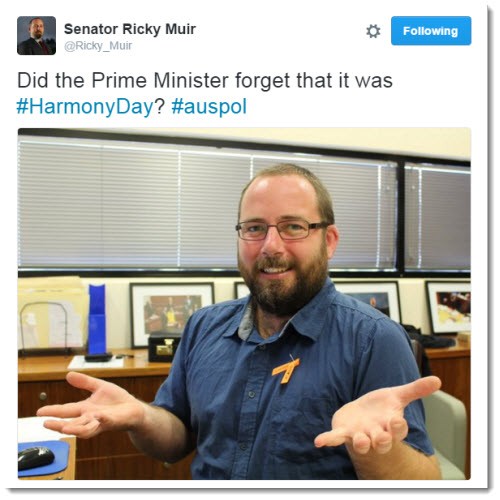 Continuity with change. Tony Abbott has popped up again uninvited to give his two cents on his successor’s decision to consider a double dissolution election. “It’s very easy for me to campaign for the election of the Turnbull government because the Turnbull government is running on the Abbott government’s record,” said the backbench member for Warringah. As a result, Turnbull has been asked multiple times how he differs from Abbott. His answer, consistently, is that although he is running on many policies implemented by Abbott, he has also set up his own. The phrase used by both Turnbull and his Finance Minister Mathias Cormann is “you have continuity and you have change”.

Jeff Waugh pointed out on Twitter last night that this talking point is eerily similar to the slogan for the election of Selina Meyer in Veep: “Continuity with change”. 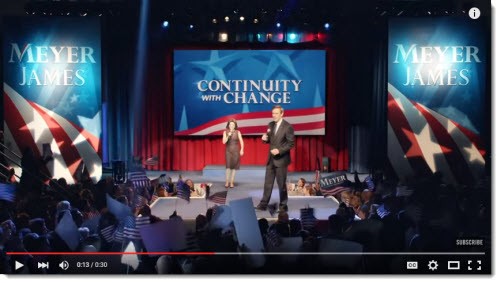 Perhaps not the best model for how to run an election campaign?

Overturn the table. And speaking of fictional politicians who might or might not be influencing our own government, Netflix’s House of Cards was quick off the mark after Turnbull’s announcement yesterday … 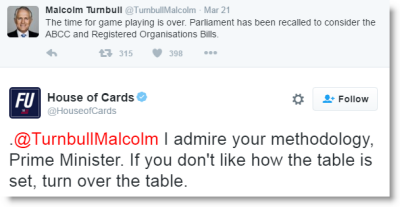 Labor movements. We hear that some interesting movements are afoot at Sussex Street in Sydney, with new general secretary of the Labor Party’s NSW branch Kaila Murnain set to secure an assistant general secretary, after a two-month delay in filling the role. Opposition Leader Luke Foley’s chief of staff, Pat Garcia, has been approached to take on the role as the Right faction’s assistant general secretary, meaning he will leave Foley’s office, which has been struggling to make a dent in the popularity of Teflon Mike Baird. Why has it taken so long to fill the role? One insider says “the job of uniting the Right at the moment is all but impossible,” and with recent controversies, any takers would need to be up for a tough slog. A tipster says there could be a sweetener in the deal for Garcia, a parachute into the seat of Coogee, where he is a local: “The arrangement will see him give him return to Macquarie St in three years time with the gift of a guaranteed, head office approved preselection to contest the seat of Coogee at the state election in 2019”. Too smart by half? We’ll be watching.

We tried. Ms Tips heard a rumour that Fairfax had recently approached the publisher of Schwartz Media, Morry Schwartz, for advice about printing papers one day a week (a topic Schwartz has some expertise in, given he publishes The Saturday Paper). We asked Schwartz whether there was anything to that, and he said: “As if.” He said there was nothing to the rumour, and anyway, The Saturday Paper was a very different product to the weekend Fairfax metros.

Of course, rumours of Fairfax cutting some editions have been around forever. It hasn’t happened yet, but it is the path many overseas publishers have taken to falling circulations. But there are pros and cons to doing it. For one thing, it would mean many of its printing plants would operate less efficiently — a fact that’s led some observers to guess Fairfax would be more likely to cut print entirely rather than cut editions. But then, not printing the weekend papers would lose it millions in print real estate advertising.

Know anything about developments at Fairfax? We’re all ears.

The continuing Tip and Non-Rumour are that the Crikey Commissariat / camp followers are worried that once again enough Australian Citizens won’t support the Commissariat’s Grand Delusions.

Talcum’s certainly running in the Abbottrocity’s three word slogan mode – “Continuity with Change”.
Toxic seems to have caught trump’s disease of referring to himself in the 3rd person – almost as if he can’t bear the thought that he was once a real boy and is now just a wooden puppet with a lengthening nose.

Surely, AR, you can do better than the Crikey Commissariat did with their article?