Media briefs: a showdown or an ambush? … what price exposure … Gawker bankrupt? …

How the media reported Turnbull's announcement. And other media tidbits of the day. 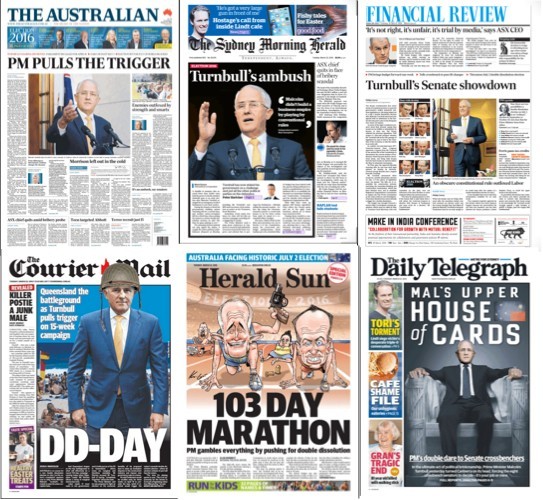 What price exposure. Radio host and TV personality Chrissie Swan was the host of Channel Ten’s coverage of the Grand Prix over the weekend, which some racing fans have criticised for, well, not showing enough racing.

In the course of responding to the criticism on Twitter, Swan said she wasn’t paid to host the coverage.

It’s no big deal, she tweeted, when asked (by showbiz reporter Peter Ford) why she didn’t refuse:

“It’s called publicity. If you’re lucky enough to have a TV show, and you love your employer, you’re happy to help out when you can.

“Same with radio interviews and magazine articles etc. It’s simply part of the job, and a great part at that.

“It’s an honour to support the network I’ve worked at on and off for 13 years.”

Swan, of course, got her big break on Big Brother on Ten. Since then she’s been involved in a number of its shows. — Myriam Robin

The end of Gawker? Wrestler Hulk Hogan (real name Terry Bollea) was this morning awarded an additional US$25 million in punitive damages from Gawker Media by a New York jury. This is on top of the US$115 million the jury awarded in damages last week, after Hogan sued Gawker for publishing a clip of him having sex with the wife of a friend in 2012, which he says caused him great emotional distress.

The case has the potential to push Gawker to bankruptcy. The company is appealing and, according to its founder Nick Denton, it is confident of winning. It argues that key evidence was held back from the jury.

Crikey originally quoted Kotaku Australia editor Mark Serrels in this brief. The quote was carried on a fake news website — he never gave it. The brief above has been corrected.

Who’s laying out The Age’s arts pages? Clearly not the same person every day. The paper ran the same cartoon twice in two days — today on page 28, yesterday on page 16. Poor Horacek — we wonder if she gets double the fee … 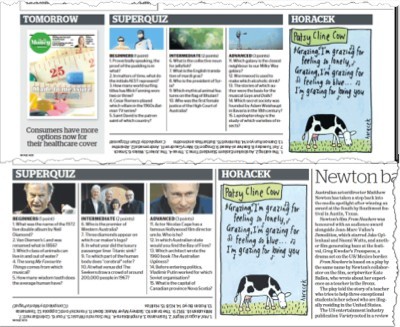 Ad transfusion from print to online continues. There’s no respite for the embattled print media from a new forecast on ad spending.The latest ad revenue forecasts from ZenithOptimedia predicts billions of dollars in print ad revenues lost to newspapers and magazines over the next three years, piling more pressure on already strained balance sheets and asset values.

According to ZenithOptimedia, businesses around the world are set to spend more on all forms of internet advertising than on television commercials for the first time next year. Zenith said it expected internet advertising to grow at more than three times the rest of the industry in 2016, driven by demand for ads on social media (especially mobile), online video and paid search:

“Over the last ten years internet advertising has risen from 6% of total global spend (in 2005) to 29% (in 2015). Meanwhile newspapers’ share of global spend has fallen from 29% to 13%, while magazines’ has fallen from 13% to 6%. Print titles will continue to lose market share as their readership continues to decline,and either move to online versions of print brands or other forms of information and entertainment entirely. We predict newspapers and magazines will continue to shrink at average rates of 4% a year between 2015 and 2018, ending with 10% and 5% market shares respectively.”

Of course, the agency notes, this doesn’t rule out print publishers making money through online advertising — that advertising is captured in its online category. Speaking of which, eating print’s breakfast (and lunch and dinner) is mobile advertising. The analysis has heady predictions on its continued growth, and wagers desktop internet advertising will flatline at 2% a year. — Glenn Dyer

The Gawker article contains a reference to Australia’s Kotaku and a link to the editor’s (apparent) comments on his dissatisfaction with the Gawker brand – only thing is, the link was to P4RGaming, which is a satirical news site much like the Onion (as some of the other article titles will confirm).

Sorry, “Play4Real” is the name of spoof site. But yes, it’s all fiction.

Cheers Nicholasb. Mark Serrel’s got in touch about that – have fixed above.

If only someone could get “in touch”, Myriam, about the far more serious emotive / intellectual problems affecting the Commissariat.