The government’s proposed legislation targeting the construction industry has support from about a third of voters, as does Malcolm Turnbull’s plan to use the ABCC bill as the basis for a double dissolution election, according to today’s Essential Report.

And voters also support a double dissolution election based on the ABCC bill. While this poll was conducted before Prime Minister Malcolm Turnbull’s announcement yesterday, it indicates voters back his intention to go to an election if the Senate refuses to pass the ABCC bill. 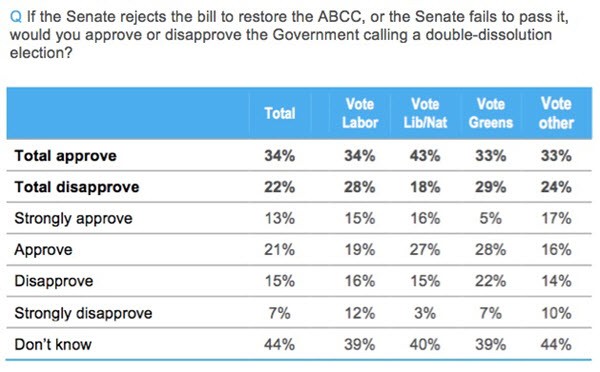 Even Labor voters support an early election, 34%-28%, although, again, there’s a strong “don’t know” response across all voter categories. Labor voters, however, may have mixed motives for wanting an election, because the parties are still locked at 50-50 on the two-party preferred outcome. As we enter what will likely be the longest election campaign in Australian history, the Coalition’s primary vote is up a point to 43% while Labor’s primary vote is up two points to 38%, while the Greens are down a point to 10%.

Essential also asked about sexual harassment: 28% of women and 14% of men reported that they had been sexually harassed at work at some point.

People working part time and those who’ve been in the workforce longer, unsurprisingly, are more likely to report harassment. What constitutes harassment? That produces a surprising result: men and women have roughly similar views about what kind of behaviour is sexual harassment. “Sending sexual emails” was most commonly cited as an example of sexual harassment (61%), with another 27% saying it “sometimes” would be harassment; 60% of men and 62% of women agreed it was. “Touching someone in a familiar way” was the next most widely agreed form of harassment, with 46% saying it was always harassment and 37% saying it was sometimes harassment; women were slightly more inclined to see it as harassment than men (49% to 44%). Men and women were broadly in agreement about “telling sexual stories” (28% always, 47% sometimes) and also almost identical in how they viewed “if your superior asks you on a date” — 26% always and 39% sometimes, while “flirting with a co-worker” was seen as always harassment by only 19%, with 50% saying “sometimes” and 23% saying it was never harassment.

Well voters may not be ‘turned off’ …yet, but they sure aren’t supporting Turnbull’s so-called gambit.
The biggest number is “don’t know”, by a fair margin.
That hardly translates to support.
Approval for Mal’s gamble, sorry ‘gambit’ is just one-third of respondents and if you take out the usual rusted on COALition types, the base that hates workers, then support for the desperate gamble is minimal everywhere else including the category ‘others’.

Big gamble for Mal, he must be really desperate and is going to need all the hype and praise the media can sling his way.

It’s vital that Shorten makes the case – via the media – against reviving the ABCC.

Yesterday it was reported that Immigration & Border Protection workers would be striking at airports & shipping terminals over Easter – something the travelling public detests. However, when the CPSU’s Nadine Flood gave a couple of clear practical examples of why their working conditions weren’t acceptable it was easy to identify with the unionists’ gripes.

Shorten needs to humanise the problems by identifying examples of how the ABCC legislation will impact unfairly – & NOT make it about money. Make it about fairness, basic freedoms & the pressures of staying employed.

zut…I would add to your last sentence…’staying alive’!
My understanding of the period when the ABCC was last in place (under Howard)…there was NO improvement in productivity, and more accidents and deaths on building sites. (ABS statistics).
Just goes to show how much the Coalition cares about workers…on construction sites in particular!!
Talcum and all his offensive windbags are at it again…telling porkies!!!

Where do you draw the line?

Polls. Hate them. But they’re the staple diet of ‘journalists’.

[email protected] – well it’s easier than doing, y’know, yer akshal journalism – finding out what the powerful want hidden and making it known.
Polls do demonstrate one thing though – most people are thick and don’t know their own best interests from a hole in the ground.