Who knew what and when? While Malcolm Turnbull says he told his cabinet by conference call that the budget would be a week early in order to allow for the possibility of a double dissolution election, a tipster tells us that the Liberal Party is already setting up call centres in preparation for what will be a very long election campaign. An IT company in Canberra is flying staff around all the state capitals “to set up call centres for the Liberal Party for what he said are for ‘donations and information’,” says one tipster.

The Australian Electoral Commission hasn’t been taken by surprise either — the body has been advertising for election staff for a few weeks now.

A close reading. Groupthink at News Corp? A tipster has pointed out these two ledes at The Australian and The Daily Telegraph from last week. Both were reporting on the Daily Tele‘s win against disgraced sports scientist Stephen Dank in his defamation suit against the News Corp tabloid. Eerily similar? The same subeditor? 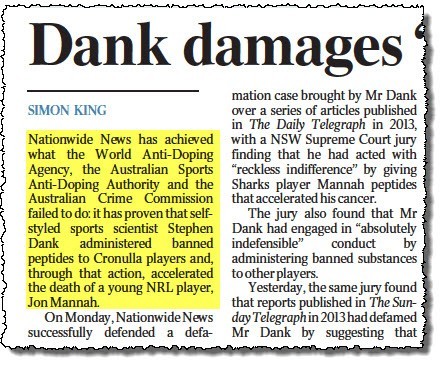 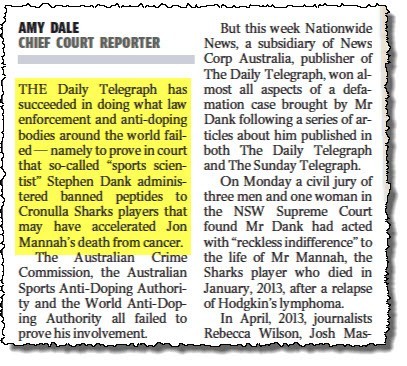 Cut and Paste and Get it Wrong. If Ms Tips took the time to rebut every jibe in the Oz‘s tedious Cut and Paste column there wouldn’t be much time for anything else, but some things cannot be ignored. On Saturday the national broadsheet found the time to bag Crikey for not reporting on the homophobic slurs aimed at Freedom Boy Tim Wilson as part of the preselection battle for the seat of Goldstein, which he eventually won by two votes on Saturday. But Crikey did of course report that Wilson’s support for the Safe Schools Program was being used against him — in Tips and Rumours last Tuesday, well before the Oz splashed “exclusive” all over its rehash on Thursday.

But if Cut & Paste is looking for homophobia, perhaps it should look at the campaign in its own paper against an anti-bullying program, a campaign that led to an increase in young LGBTI people seeking counselling for mental health issues.

Flying the flag. Last Friday night at the Crown Palladium, Fairfax investigative journo Adele Ferguson won the Gold Quill for the second year in a row. She was also named the Graham Perkin Journalist of the Year, a “bittersweet” award she said she accepted with a “heavy heart”, given her employer’s plans to cut 120 positions — or their equivalent in other budget cuts — from the Age, SMH and Financial Review.

On stage to present Ferguson her award were three people: Ray Martin, representing the judges, Virgin CEO John Borghetti, a major sponsor, and Allen Williams, the managing director of Australian Publishing Media at Fairfax, flying the flag for the company. On stage and for pictures afterwards, Ferguson posed between Borghetti and Martin, leaving Williams, her employer, somewhat on the outer. It must have been an awkward night for him — some Fairfax scribes wore their Fair Go Fairfax shirts to the awards, and few journos from any media organisation accepted a gong without expressing their solidarity with the striking Fairfax journalists.

The cuts overall cast a sombre pall over the evening — there was little exuberance in the speeches. Legendary Herald Sun football writer Mike Sheahan, accepting his lifetime achievement award, said he only hoped the next generation would have the same opportunities. Given the cuts, he said, he suspected they wouldn’t.

Best name ever. Never ask for input from the internet is the lesson learned by Britain’s Natural Environment Research Council, which might soon be sailing the seven seas on its newest ship — RRS Boaty McBoatface. The NERC funds environmental science in the UK and opened up a competition to name its 200 million pound polar research vessel last week, but so far the leading suggestion is not really what the boffins had intended. The release from the NERC includes this call to action from Universities and Science Minister Jo Johnson:

“Can you imagine one of the world’s biggest research labs travelling to the Antarctic with your suggested name proudly emblazoned on the side? The polar research ship represents a leap forward in securing Britain’s place as a world leader in marine and climate change science — and illustrates this government’s commitment to invest in research facilities on a record scale.

“With the eyes of the world on this ship, this campaign will give everyone across the UK the opportunity to feel part of this exciting project and the untold discoveries it will unearth.”

Well, the ship has the eyes of the world now, but not as was expected. The name RRS Boaty McBoatface is outpolling its rivals, including RRS Henry Worsley, after the explorer who died attempting the first solo unaided crossing of the Antarctic this year. The name was suggested by a comms manager in the UK as a joke, but it caught on. The website to vote for options has crashed, so we assume that Boaty McBoatface is sailing along ahead of the competition. 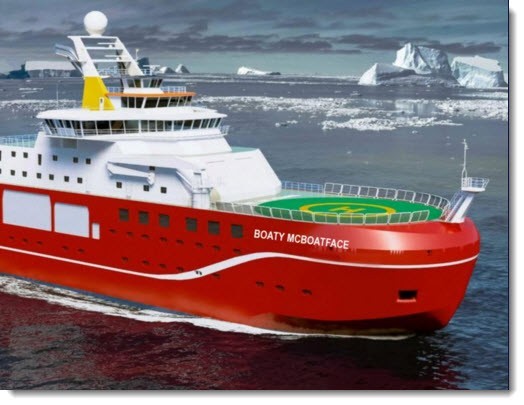 Role models for sale. A caller to 3AW this morning says an AFL club is calling around childcare centres offering visits from players to help the AFL’s tarnished reputation. Unrelated to tonight’s episode of Four Corners featuring ex-Essendon player Hal Hunter lambasting the club for the lack of information about its supplements program? You decide.

Name polls never work because the funny name that wins gets ignored every time. Remember the dump the internet tried to name The Fred Durst Society of the Humanities and Arts?