How do you fill a newspaper with no journalists? Plus other media tidbits of the day.

We read the strike papers so you didn’t have to. How do you produce three papers with a skeleton staff? It can be done, especially if you’ve got plenty of copy across a network to draw on.

The Saturday, Sunday and Monday editions of The Sydney Morning Herald and The Age have plenty of AAP copy, front-page splashes written by the company’s most senior editorial leaders, and articles with no bylines at all. But they also include bylined copy from journalists, mostly from The Australian Financial Review.

The Fin isn’t as heavily unionised as the two metro papers. And while someone’s byline in the paper isn’t proof that journalist decided to break the strike — journalists often file early — the sheer quantity of bylines from the Fin suggests plenty of its journos were hard at work as their colleagues manned the picket line.

One Fin journo filing over the weekend was Rear Window’s Joe Aston, who wrote this morning that he was no scab:

“I am not a private contractor. I haven’t been flown in from Dubai by [former waterfront boss and union buster] Chris Corrigan. I am turning up to work for my employer, as per my contractual obligations, and I am declining to participate in an unlawful strike organised by a union I’m not a member of.”

Fairfax’s editors are also filling the paper themselves. The editors-in-chief of The Sydney Morning Herald and The Age hit the keyboards to pump out front-page yarns over the weekend.

On Saturday, the SMH carried a story on the Senate shenanigans by none other than editor-in-chief Darren Goodsir, helped along by Age senior editor Mark Hawthorne. There’s nothing exclusive or particularly exciting about the report, but it got the front page filled. And today, the front page of the Age is an exclusive brought in by “staff writers”. The online version, however, credits the report, detailing the Victorian state government’s potential sale of the Port of Melbourne, to acting Age editor-in-chief Mark Forbes.

Yarns aside, social media users were quick to spot the sometimes staggering errors in the paper … 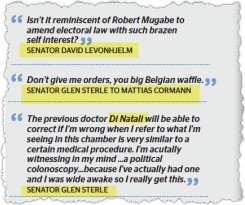 Surely that had to be intentional?

All Fairfax staff are back to work this morning. — Myriam Robin

Bolt signed, Credlin next? As a tipster suggested to Crikey in January, Sky News has signed Andrew Bolt on for a daily show. He’ll be on every night at 7pm from May.

“Sky News beats all the networks in its commitment to news and true debate, and I am proud to be joining it,” Bolt said in the release. “My brief: to unspin the usual spin and inform viewers without fear or favour on the issues that matter most.”

The weekend’s papers papers carried news of another possible Sky acquisition. According to Sam Maiden in the Tele:

“[Peta] Credlin is in talks with Sky News about joining its federal election coverage.”

Macquarie cashes out. Macquarie Group has quit its longest held media investment — a 26.1% stake in Southern Cross Austereo — and cashed out. So for all the talk of media deals and mergers if the federal government’s change to media laws occur (not until early 2017, if the Turnbull government retains office at the coming federal poll), Macquarie has taken advantage of Nine Entertainment’s interest in Southern Cross (Nine wants the two radio station chains in Southern Cross, not Ten’s regional TV business) to grab around $200 million in cash, which it can spend elsewhere.

In fact it’s a powerful message to the rest of the media sector and to the likes of Nine, Fairfax, Telstra (which itself is sending a message by wanting to bail out of its 50% stake in Foxtel) and News Corp. Macquarie is saying there is no money to be made in the media, that all the possible deals are defensive and designed to protect an already shrinking value of existing players — not offensive and designed to grow value. News Corp, which is trying to rework its pay TV holdings to allow Telstra to exit most of its Foxtel holding, is being defensive and trying to circle the wagons to fend off the streaming services from Netflix, Hulu, CBS, HBO and the myriad other new services emerging offshore. Foxtel’s joint venture streaming service with Seven, called Presto, isn’t enough, and nor is its Anytime streaming service. — Glenn Dyer

Front page of the day. The Independent on Sunday‘s last front page … 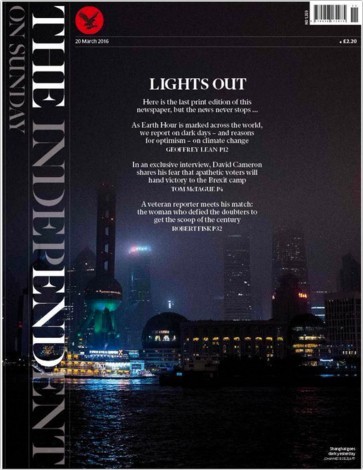 If only Crikey had the quality of Bolt and Credlin on their staff.

They could have Norman hanscombe too if he promised yo leave us alone.

bushby jsne because you sometimes show on issues not affected by your political prejudices that yin all ou’re bright, conscience I can’t leave you lost in Crikey’s ‘intellectual’ quagmire.