Time to say goodbye. Before the Senate went decidedly nutty, the House of Reps took time to farewell a few of its own, as the great exodus of MPs (before the election has been called) continues. Member for Brisbane Teresa Gambaro took the opportunity to thank her family and recounted the difficulty of telling her father she would be running for Parliament for the Liberal Party:

“I bravely walked into my father’s restaurant office t o tell him that I would be running for preselection two nights later. My father, in his typically protective manner, told me that politics was a dirty business and that no daughter of his was going into politics and that he would not be supporting me. It did not quite go the way I thought it would. So I told him that, with or without his support, I was determined to run and win the seat for the Liberal Party and to see the end of the Keating Labor g overnment and the election of John Howard as prime minister.”

It didn’t take long before he was helping her write speeches, and he was ultimately incredibly proud of his daughter.

Member for the Riviera of Melbourne, Bruce Billson, also took the opportunity to say farewell to Canberra, recounting how he had charmed the Prince of Denmark:

“I remember the Prince and Princess of Denmark coming to our area, and Prime Minister Howard, with a smile on his face, said: ‘This is Bruce Billson. He looks after tragedy when it happens overseas for our country.’ I thought I can match you with that, and I went up to Prince Frederik and I said, ‘Gee, we’ve got a lot in common.’ He goes, ‘Why is that?’ And I said, ‘Gee, we’ve both married well, haven’t we?’ It was not quite an awkward diplomatic moment, but Prime Minister Howard enjoyed it.”

He also explained why he has only once been thrown out of the House for unruly behaviour:

“The parliament is an interesting place. I was only ever thrown out once in 20 years, because I thought, ‘Can I explain my behaviour to my kids?’ That was my benchmark. I was unfairly warned by Speaker Neil Andrew. I made the mistake of pointing out that he had got me confused with one of my colleagues, who was behaving like a peanut. He did not like me pointing that out, and he bounced me. I apologise to my electorate for being absent for an hour when I could have been in here making a contribution.”

Ian MacFarlane, John Cobb and Mal Brough also took the chance to make valedictory speeches this week. Billson told the House that he had only hours to prepare for his speech, and for that reason his wife could not be present to see him out. Why the rush, we wonder? Clearing the decks for an early election?

While you were sleeping. As debate about the Senate voting reforms raged throughout the night, things got more than a bit silly. When Senator Stephen Conroy talked about bums on red leather, Senator James McGrath pulled him up on his language — isn’t “bottom” more appropriate? In a debate about how our democracy works, bums/bottoms got far too much attention, and the folk at HuffPo remixed it a pretty good song: 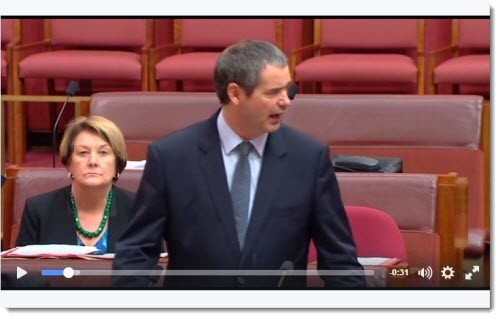 While pollies tried to keep their media appearances going, while still attending to business in the Senate, Labor’s Sam Dastyari couldn’t wait until he was actually off air in an interview with Sky’s Laura Jayes, walking off in front of the camera: 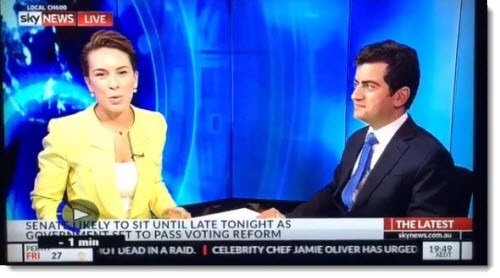 But he couldn’t manage to stay awake when he was actually in the chamber: 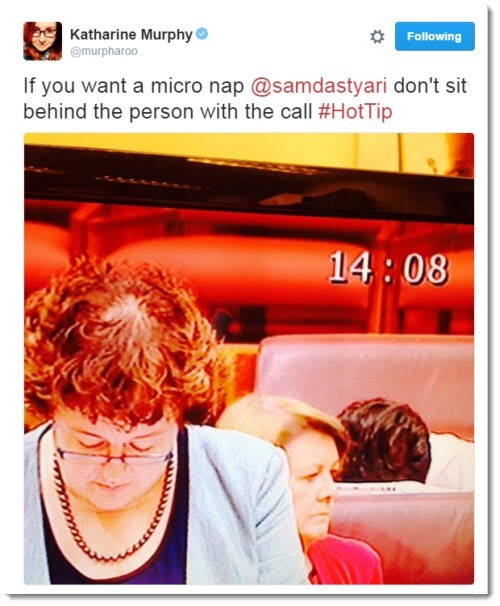 The pollies passed the time by creating and tweeting memes, which probably would have been better quality if they didn’t tweet them in the wee hours of the morning: 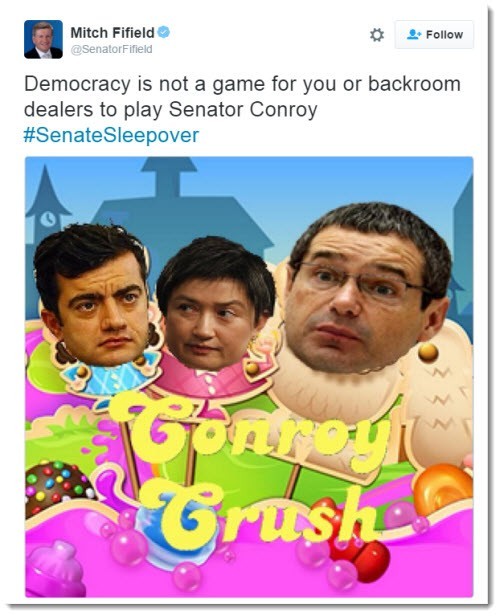 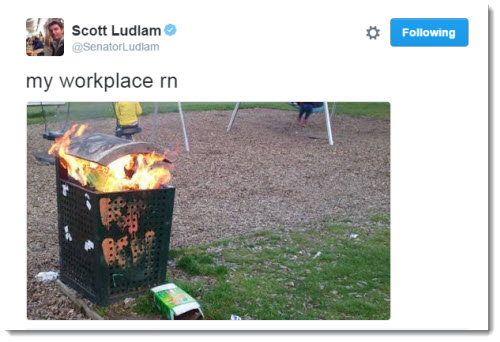 A trophy for the Oz. Every year, News Corp’s Sydney journos leave their Holt Street bunker to play a cricket match. It’s The Daily Telegraph and a few other community papers verse the Oz, and the broadsheet reigned supreme for the second year in a row.

According to the match report, the Oz chased down the Tele‘s total of 155 runs off 35 overs in just 23 overs.

Sources tell us Nicholas Gray, The Australian‘s CEO, bashed a solid 29. New Tele editor Chris Dore didn’t play, but he did sit in the stands dispensing, we’re told, “a similar volume of advice as at morning conference”. Player of the match went to Oz sports journo Simon King, also the Oz’s captain, who was handy with both bat and ball. Ian Paterson, from the North Shore Times, was the top scorer for the Daily Tele, on 54.

Ain’t nothing like a dame. The Department of Prime Minister and Cabinet has released letters from constituents written to former PM Tony Abbott about the reintroduction of knights and dames, now seen as one of Abbott’s worst captain’s calls. The letters are mostly from disgruntled Liberal voters who were angry that Abbott was making the government look silly. There were also a few who were keen to put their ideas for potential recipients forward: 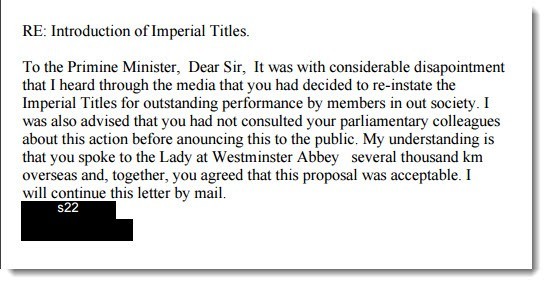 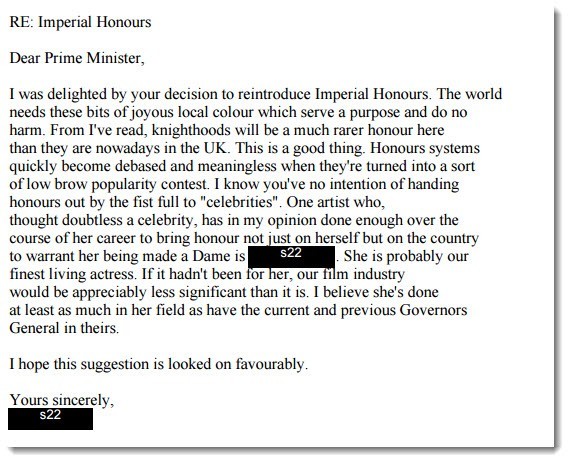 Downer and Downer. We reported earlier this week that the preselection battle for the seat of Goldstein had turned nasty, with a smear campaign against Tim Wilson for supporting the Safe Schools Program and the rights of LGBTI people. A caller to 3AW yesterday said that Australia’s High Commissioner to the United Kingdom, Alexander Downer, had been working the phones for his daughter Georgina, who hopes to become the fourth generation of the family to get into politics. The vote will happen this weekend to decide who will be the Liberal candidate to take over Andrew Robb’s safe seat.