Fairfax strikes. And other media tidbits of the day.

Safe as houses? The Age and Sydney Morning Herald today — editions produced during the strike — both bear a wrap-around ad for Domain. “What is your home worth today?” readers are asked, before flicking through to find the paper proper over the page. 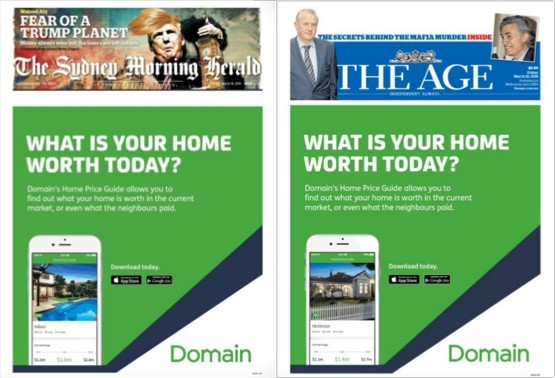 The promotion was likely planned for some time. But it’s a telling image, on a day where hundreds of Fairfax journalists don’t turn up to work in a bid to convince their company of the importance of funding what they do. It comes during a week when the pages of the Financial Review have been filled with promotions for its Business Summit conference. The papers make a good marketing tool for other things, it seems — things that can make Fairfax more money.

For the metros, Domain is the lifeblood of the business. But the heavy focus on spruiking it has its risks. The housing boom is slowing (and will not be as strong this year as it was in 2015). Should Labor win the election and bring in a crackdown on negative gearing and capital gains discounts for investor housing, that’ll also serve to flatten property pricing. Domain is powered by a boom that appears to have peaked.

In his presentation to analysts in February, CEO Greg Hywood said:

“Across the Group, over the last four years we have reduced publishing costs in excess of 26% or $400 million on an annualised basis. In Metro publishing costs are down 34%. And yet, as I pointed out earlier, our network has never been stronger and our audiences have never been larger.”

Breaking the strike? Meanwhile, the websites of the Sydney Morning Herald, Age and Brisbane Times were down this morning. Staff were emailed about a “major incident” that started at 8.31am. The sites appeared to be back up by 10am.

The papers today are filled with stories that could conceivably have been filed before the strike started. Many Fairfax journalists are on Twitter assuring readers they didn’t break the strike — but merely filed early.

Though some weren’t so squeamish. Every revolution needs an enemy, and we think the Fin‘s Joe Aston just volunteered to be it …

The market will decide. On the strike, here’s Alan Kohler in Business Spectator:

“What is the right number of journalists for The Age and the Sydney Morning Herald — the right size of their newsrooms?

Nobody knows. It isn’t what the striking journalists, or their union, think it should be to best serve their audience with news and entertainment, or to best serve the nation with journalistic scrutiny of the powerful. Nor is it some arbitrary percentage of what those newsrooms used to be.

The market is going to tell Fairfax — and News, and every other legacy publisher — what the size of their newsrooms has to be. That information will be imparted through the money they and the advertisers pay, which hasn’t stopped changing and probably never will.”

Losses, losses, everywhere! While Fairfax Media journalists contemplate the loss of the equivalent of 120 jobs from The Sydney Morning Herald, The Age and The Australian Financial Review (or fifth of the total number of editorial staff on the three papers), The Guardian has revealed plans to chop more than 300 jobs — including at least 100 full-time journalists at The Guardian and the Observer. All the cuts will happen in London and constitute the first ever compulsory redundancies at the paper. The websites in the US and Australia are exempt.

The losses at The Guardian are the first of at least three major cuts at UK publishers. The Telegraph has a review underway to see whether the group is kept by its owners (the reclusive billionaire Barclay twin brothers), and if it is, how costs can be cut. And the Murdoch clan’s News UK is reported to be looking at around 100 job cuts, most from non editorial staff, as it battles a slide in ad revenues for The Sun. The Guardian’s losses were signalled in January when news emerged the paper’s losses had ballooned in 2015 as UK print ad revenues slumped 25% (UK retailers slashed advertising to use the savings to cut prices in the discount war with Lidl and Aldi). The paper is looking to save 54 million pounds a year and return the group to profitability by 2018-19.

“Given that over half our current costs are people, we propose to reduce our UK headcount by around 250 people. While protecting journalism remains our priority, we anticipate the impact will be spread across all departments, including editorial. We hope to achieve the target reductions through voluntary redundancy. If we do not achieve the reductions we are targeting by voluntary means, we will consider whether compulsory redundancies are necessary.”

Why not try crowd funding for indigent journalists? It would be no less worthy than many other such fundraising efforts.