Poor Will Glasgow, suffering through his current employment. Plus other media tidbits of the day.

Counting down the days. Poor Will Glasgow. In late January, The Australian announced it had hired him away from the Fin’s Rear Window to pen a new business gossip column. It seems the Fin is keen to work him for as long as it can. But he’s obviously keen to get started at his new employer, as he cryptically told readers of his column this morning … 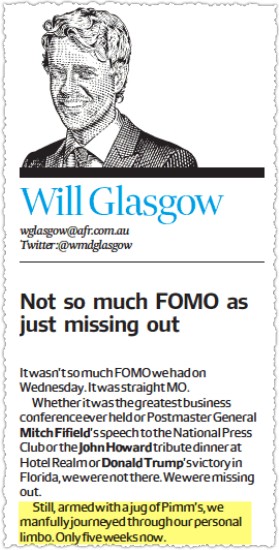 Live from the Tamworth Hotel. The Senate is expecting to sit late tonight — Labor Senator Sam Dastyari has warned his colleagues to “bring your pillows, bring your mattresses” as the body settles into a long night of debate on changing the Senate voting system.

But were political junkies to get bored of that (and who could blame them?), they could always turn to Sky. At 9pm, live from the Tamworth Hotel, Barnaby Joyce is debating his predecessor in the seat, Tony Windsor. — Myriam Robin

Why can’t we see the Senate? While the House of Representatives reformed its photography rules years ago, they’re still pretty arcane at the Senate. Photographers can’t take images of senators when they’re sitting, or during votes.

“The fundamentals of Australia’s democratic system are up for debate this week, yet that debate is being deliberately censored.

“The government is trying to pass sweeping Senate voting laws it says would make the electoral system fairer and more transparent. It has prompted extraordinary, farcical scenes as the government gagged debate on one of its own bills and the Greens sidestepped a debate on same-sex marriage.

Yet when the time finally comes to vote on the changes, you won’t see a photo of this historic moment. Or plenty of others …

In the Senate, the revolution can be televised but not photographed.”

Video of the day. The difference in the way President Obama and Donald Trump handle protesters … 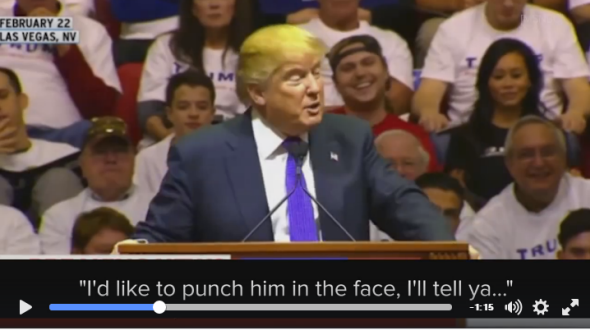