Despite some Photoshop wizardry, an image of Ror Akot used by The Project was recognisable to those who knew him.

Channel Ten’s The Project has apologised to Ror Akot, a South Sudanese hip hop artist from Melbourne, after it used a digitally altered image of him to illustrate a video package on gang violence in Melbourne on Monday night.

The show used a stylised image of 19-year-old Akot, who goes by the stage name Ror Da Poet, taken from a 2013 documentary short about him and his music, called ROR. The image of his face, taken by documentary photographer Justin Leijon, was widely used in promotional material and other media at the time. On Monday, The Project rendered a stylised image of it in black and white, with a black bar over Akot’s eyes, over a background of the South Sudanese flag.

But Akot was still recognisable to those who knew him. He learnt that his image had been used when friends called him, some of them to ask if he’d been involved in the gang violence in Melbourne on the weekend. 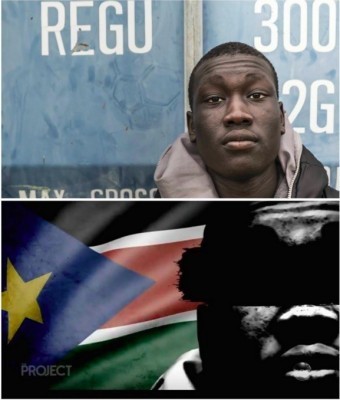 Akot above as he appears in the documentary, and below as his face was rendered by The Project

Akot’s concerns were made public yesterday after Natalie Cunningham, the documentary filmmaker who directed ROR, raised the issue publicly on her Facebook page. Akot posted her statement, along with his own, on his own Facebook page yesterday afternoon.

“In a story last night on gang violence, we inadvertently used a graphically altered and treated image of Melbourne rapper Ror Da Poet. We’d like to make it clear that Ror is in no way connected to gang violence and and we apologise for any distress the use of this image may have caused.”

The episode appears to have been removed from The Project‘s website.

Cunningham told Crikey that despite the apology, she felt “the damage has been done”.

“It’s so unfortunate to see such an exceptional young man have his image used in such a negative way … It does a great disservice to the South Sudanese community (and wider African community) and it is very discouraging and disappointing to see such lack of consideration given to the use of his photo.”

When Akot was nine, his family escaped from South Sudan. In 2014, he was the Yarra Council’s Young Citizen of the Year for his role in mentoring young musicians and his input into council policy involving young people as a Yarra Youth Ambassador.

Yesterday, Akot wrote that he was “very disappointed and disgusted” by the use of his image. He declined to comment further.

“There was plenty of live footage from the weekend’s violence at your disposal and it’s completely unacceptable that you resorted to using this photo, which left the person in question feeling victimised for absolutely no reason other than the fact that you decided to present your story in a given way.”

She added that more than a year ago she had been contacted by the program’s producers about permission to use footage from the documentary in a story, a request to which she agreed. “You’ll understand that I can’t say the same for the use of this photo (credit: Justin Leijon) in this case (not that you asked).” Cunningham’s post also says she believes another man’s image was used in a similar manner by The Project for the segment, but she was not naming him as she didn’t have his permission to do so.

Picking that likeness took a bit of skill.

Classic trolling – why not add ‘machete’ and ‘ISIS’ in the mix just to get heads spinning. What is more divisive – racism or sectarianism ? Maybe throw in some misogyny to complete the trifecta. That’ll drive the right-wing under their beds for decades. Oh scary …