Get a good job. It’s a Canberra house of legend, the sharehouse owned by former treasurer Joe Hockey’s wife, Melissa Babbage, that was home to many MPs and featured on the ABC’s Kitchen Cabinet. Former Liberal party leader Brendan Nelson even lived in the shed. The house was also the subject of controversy when it was revealed that Joe Hockey was claiming the living away from home allowance to live in his wife’s house. Now, following the Hockey family’s move to Washington, the house is on the market, with an asking price of more than $1 million. 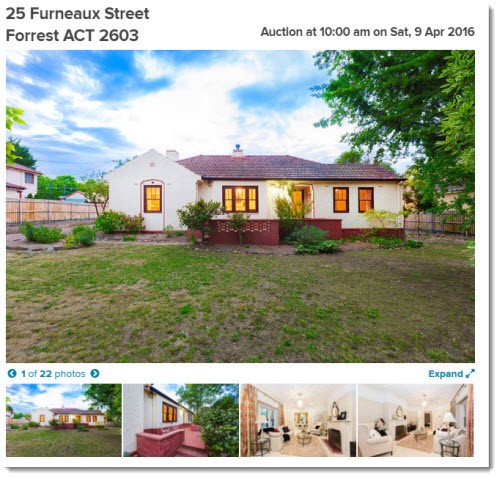 Now, how would one afford such a house? Get a good job that pays good money, of course.

Bruce Billson, extra agile. Rumours have swirled over the future of former small business Minister Bruce Billson, who is retiring from Parliament to take his enthusiasm elsewhere. The MP for the Riviera of Melbourne has been connected with the Australian Chamber of Commerce and Industry, eyeing off Kate Carnell’s role as CEO. In his register of interests, updated this week, Billson declared that he has become a director of Agile Advisory Pty Ltd — how innovative.

You are cordially invited. While the government continues to send mixed signals about the date of the budget, there is one MP who’s put his money on May 10. Paul Fletcher, Minister for Major Projects, has sent out invites to the official budget night party in the Mural Hall– on May 10. Probably should clear the calendar for May 3 just in case. 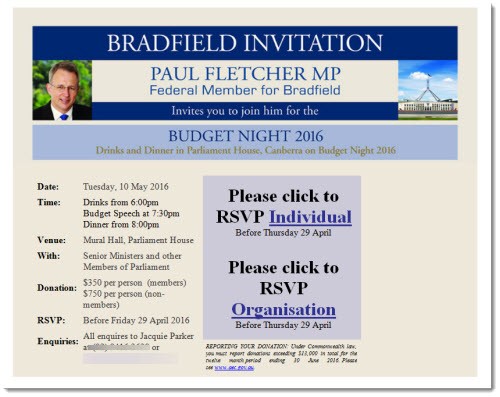 The limits of open data policy. Under Prime Minister Malcolm Turnbull the government has been embarking on a project making more government-held data available in a format that can be usable in apps and for other purposes — but there are clearly limits.

A freedom of information request this week on the website Right to Know revealed that the Australian Curriculum, Assessment and Reporting Authority, the government agency that keeps all NAPLAN results and other school data, had asked for data from the MySchool database, including NAPLAN results, and school demographic information be removed from Figshare, a London-based data sharing website. It was published on the site under the creative commons open licence.

According to the emails, ACARA was concerned that allowing the data to be hosted in that form online could lead to the creation of league tables comparing schools.

The person who filed the FOI said he had been shown an app that would have functioned like the MySchool website.

The government has been at a pains to prevent league tables being made from MySchool data because it would allow comparisons between schools in low-socio economic areas and those in more well-off areas or private schools, where the results will differ wildly, without offering context as to why students in one area perform better than students in another area.

Cruisin’ for some economic advice. A tipster tells us that the most recent edition of Australia and New Zealand Cruise Passenger magazine is advertising a new type of themed cruise to the growing Australian market for those who like a side of demography with their bingo and dance nights. The “Seminars at Sea” cruise, an 11-night trip from Singapore to Hong Kong, will be hosted by none other than Bernard Salt, spruiked as “Australia’s leading Australian Futurist, Keynote Speaker, Columnist (and) Business Advisor Author”. The trip is to get to the “bottom of the significance of the Chinese and of the Asian economy (sic) and explore why this is and the opportunities the Asian market presents for investors”.

Our tipster isn’t so keen on this new form of holiday, although we imagine those looking for trips to claim as tax offsets are much more enthusiastic:

“Normally cruises offer fun offshore excursions — and perhaps a Queen revival show, trivia nights and a film or two — but the passengers on this funfest (apparently capacity is 686), while having ports of call at Ko Samui and Ho Chi Minh City, the program on offer is ‘Guest speakers, panel discussions, formal sessions and breakout sessions’.

“We’re assured, however, that due to the huge urbanization of Beijing and Shanghai, ‘Growth at this pace and scale warrants attention. Damn it, it demands attention’.

If one is interested in getting on the cruise though, it’s not so simple — the only information Ms Tips can find is this in the Adelaide Advertiser. Guess that means no pina coladas and Chinese economic advice for us.

Working hard to make a living … The Parliamentary Friends of Live Music Group held a concert at Parliament House last night, with Aussie musicians Jimmy Barnes, Josh Pyke and Paul Dempsey performing. Of course, Barnesy was the most popular drawcard: 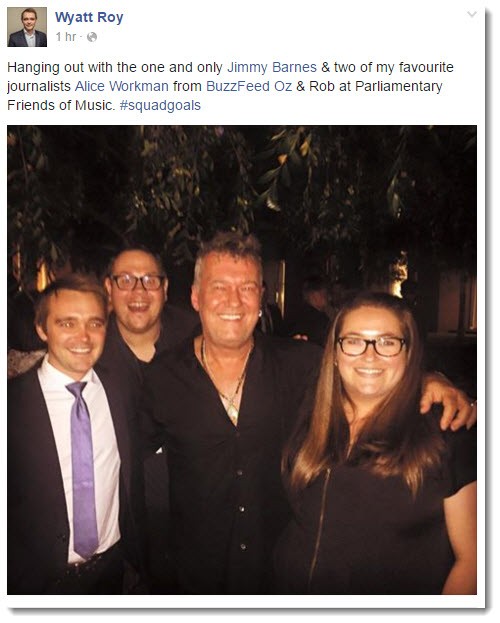 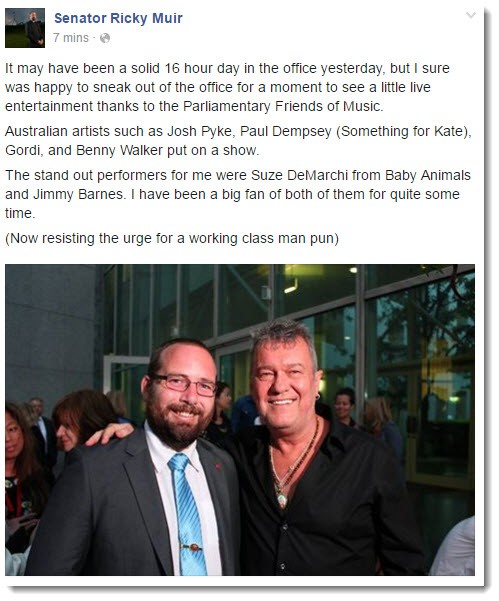