The looming crisis for women in Oz tech

One of the most important industries in Australia has few women -- and the situation is getting worse. Bernard Keane looks at the tech sector and its "female problem".

It’s the industry at the heart of the government’s economic agenda, the sector feted by Malcolm Turnbull as exemplifying the agility, entrepreneurship and innovation he wants to see spread throughout the economy, an important source of Australian jobs and growth of the future.

It’s also an industry that has a huge problem with women. And it’s getting worse.

Australia’s technology industries, particularly information and communications technology (or ICT), have been growing rapidly in recent years. In the last five years employment in the ABS industry category “Computer System Design and Related Services” has expanded by 25% and now employs nearly 200,000 Australians; in the late 1990s it barely employed 80,000 people.

But nearly all of that growth in employment has been among men. Despite a rise last year, according to the ABS figures, women only make up just over one-quarter of those jobs. And the Australian Computer Society, which examined the challenge of diversity in ICT in a report last year, quotes an Access Economics study that found women make up 27.8% of the ICT workforce. This reflects the tech sector more broadly: ABS data for employees in the telecommunications services category show that women were 30% of that workforce at the end of 2015. Another 2015 study from Professionals Australia reported 28% female representation in all science, technology, engineering and mathematics-related professions. These numbers are about on par with US data, according to both media reports and US Department of Labor data.

Naturally these are just averages — different companies have different levels of representation. Last year Melbourne company Envato revealed that it had lifted the number of women in engineering roles from 7% in 2014 to 17.3%. About 25% of its overall management were women. Tech darling Atlassian — which has assiduously cultivated the media to project an image as the great Aussie tech success story — is even worse. The company recently admitted its entire workforce is just 25% female, and less than 15% of its technical teams are women. “Brolassian” was at the centre of a storm over a sexist presentation by one of its developers in 2014.

But despite industry rhetoric about “moving in the right direction”, the proportion of women in tech is getting worse, not better. The ABS data shows that, even with a rise in 2015, the proportion of female employees in computer design areas has fallen as the sector has expanded. 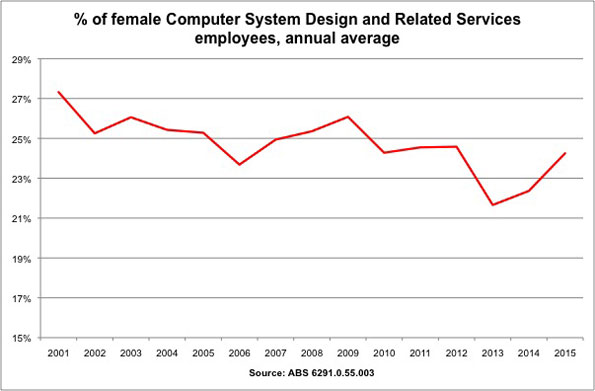 And the problem isn’t going to improve anytime soon. On one of the critical factors determining how many women enter tech industries — the number of female STEM (science, technology, engineering and maths) students — Australia is going backwards, and fast. Governments, tertiary institutions and many within the industry have for some time been worried about a noticeable decline in students opting to study STEM at school, but the decline has been much more noticeable among girls than boys. The number of girls not studying either maths or science in NSW, for example, has increased from 5.4% in 2001 to 14.6% in 2014, while the level for boys has only risen from 2.1% to 5.9%.

Both sides of politics have committed funding to programs to try to reverse the slide, and the Turnbull government’s innovation statement included funding for programs to increase the participation of girls and women in STEM studies. But even if successful, for the next few years, the tech sector will face a smaller pool of women with a STEM education. Already, people in the sector complain that they’re unable to get female applicants for jobs. “My business partner and I are in the process of recruitment, and through our personal networks we’ve been unable to find any female candidates for our technical roles,” Michael Lim, managing director of network services provider Anticlockwise, told Crikey. “The situation is alarming.” “We would love to hire more women in these roles,” another (female) manager said, “but women do not often come to us for jobs.” “In three years I’ve had one female applicant, who pulled out for something more customer-facing before hire,” another woman in the sector told us.

This isn’t just about female employees. The City of Sydney’s draft Tech Startups Action Plan points out that just 4% of Australian start-up founders are women. As one woman in the sector told Crikey: “There is a lament in the start-up community that there are not more female investors.” A Sydney female tech sector managing director recalls a US investor telling her “it’s going to get harder and harder for women to raise money, they’re just not aggressive enough and they don’t succeed often enough”.

What are the consequence of having so few women in tech? After all, some occupations — like nursing and childcare — are even more massively skewed the other way in terms of workforce. Some women say they have no interest in being identified as a “woman in tech” (and whatever stereotypes come with that label), they just want to do the work they enjoy in a welcoming environment. But there are three key reasons why the lack of women is a serious problem. Firstly, it’s a problem for the industry itself. With less diversity, companies are less productive and more likely to engage in groupthink, and earn less revenue. The industry’s workforce has little resemblance to the community that uses the products it designs, creating the potential for disconnection between industry and customer.

It’s also a problem for women, because the tech sector and particularly ICT is growing rapidly and presents a huge range of entrepreneurial opportunities and economic growth potential (increasingly facilitated by governments). That means less female participation will lead to greater economic inequality, in a way that, for example, the low level of female participation in traditional manufacturing isn’t a problem, given that industry’s decline.

Most of all, it’s a problem for democracy. The tech sector, from the mass surveillance complex it enables and the encryption tools it develops to help us evade it, to the big data assault on our privacy, from its capacity to disrupt more traditional areas of the economy to the emergence of powerful multinational companies that operate unimpeded by national borders, is supplanting the media as the economic sector with the greatest impact on the quality of our civic life. That this sector is controlled by a subsector of the population, white males, has profound ramifications for the rest of us and reflects the need to diversify the controllers of that sector to make it more reflective of the society it has such an impact on. As I argued several years ago, men in tech who are concerned about issues like surveillance can learn a lot from a group that has been subjected to intense scrutiny and social control from long before the internet: women.

But the sector’s problem with females isn’t only in the decline in girls and women studying STEM subjects. It’s not just a supply-side problem: as the Australian Computer Society report details (and reflecting the US experience), the tech sector suffers from a “leaky pipeline” problem — it loses female employees at much higher rates than it loses men as people move from study into employment and then make their way up the career ladder. Tomorrow, we’ll examine the specific factors that are driving women out of tech.

Rape fears and harassment, but bright spots for women in tech, too

I wonder if there is a tendency for women to find their way into tech employment by non-standard paths, rather than as STEM graduates. That was certainly my experience – I never considered studying computer science, but via a meandering path that led from journalism through web design to programming, found myself a software developer. I love what I do, but I would never in a million years have imagined this as my career when I was at school (stereotypes are powerful!). It would be interesting to know if other women in tech had a similar sideways approach.

There were speakers addressing this issue at the recent Ruby Australia conference at the Gold Coast. There are people in the industry attempting to address the imbalances in representation of women and other minorities. More assistance is needed from the education and other external agencies.

If we don’t manage to include as many people as possible there will be a worse shortage of IT workers in this country and many more businesses will be forced to go offshore.

We also need to highlight that many of the early pioneers of computing were women.
https://www.women.cs.cmu.edu/ada/Resources/Women/

Not me. I’ve been in IT since 1980 and came straight through a degree in Computer Science.

I love what I do, but have found it difficult to get work in recent years – despite have very up to date and in-demand skills. My age tells against me, as does my desire for part-time work.

I am not looking for work now as I am caring for an elderly relative at home. I don’t know what she would have done, or we would have done if I had been employed at the time when her need for care became obvious.

The best way to help address the issue (for tech, at least) would be to make computer programming a mandatory part of our high school education. The overwhelming majority of people I know who studied computer science had previously had some experience programming in high school, either as an optional subject or in their own time. Why would people choose to study something they’ve never tried before?

I did computer science in the late 1980’s and found that I was pretty good at it. I agree with form1planet that quite a few women I have met came into tech via other routes. One via teaching, then Geographic Information Systems to programming. I also agree with Tinatoerat that it’s harder for part-time, older women but I suspect it is in a lot of industries. I do think teaching some programming at school would be a good idea – it’s a tool to be used in all sorts of contexts, from designing a website for your business to just getting repetitive office tasks done quickly. I would also note that I am actually not that great at maths without a calculator, never learnt my times tables at all, but I can write code to perform complex statistical analyses. If it wasn’t for the advent of calculators in school in the mid-eighties I would probably be tearing my hair out trying to earn a living in my other University subject – Psychology, shudder.