Crikey's editor is moving on. And other media tidbits of the day.

Cordell to BuzzFeed. Crikey editor Marni Cordell will be leaving the publication in early April to join BuzzFeed Australia in the newly created position of head of news.

Cordell, former editor and owner of New Matilda, joined Crikey in May 2014. She’s led the publication through a period of internal change within Private Media, during which she was also appointed publisher, meaning she oversaw both the commercial and editorial aspects of the publication.

At BuzzFeed, she’ll be focused on editorial.

The move will have her permanently based in Sydney. She’s been commuting from her Sydney home to Crikey‘s Melbourne office every week for most of her tenure at the publication.

A new Crikey editor is expected to be announced shortly. — Myriam Robin

Electronic Intifada founder to Oz. American-Palestinian journalist Ali Abunimah, who Crikey reported on this week, has received his visa to Australia.

The granting of the visa means the founder of The Electronic Intifada will be free to speak at a number of public events in Sydney, Melbourne and Perth between March 21 and 31.

“I’m so grateful to every person who stood up for free speech,” he tweeted overnight. Abunimah had feared his visa was being delayed for political reasons. The journalist first tried to apply for a visa over two months ago, but had two visas rejected and was told to apply for another class, as Crikey reported on Monday.

We wrote it wasn’t clear to us whether Abunimah’s lengthy visa wait was within the guidelines for such visas — the department’s website says the visa type he applied for can take up to a month or even longer depending on what checks are needed. Supporters of Abunimah say the fact that his visa wasn’t waved through within the five-day ‘low-risk’ category is concerning. We asked the Department of Immigration for further information this morning (on Monday, it said it couldn’t comment beyond noting the application was ongoing).

Friends of Palestine WA, one of the groups that invited Abunimah to visit Australia, said in a change.org petition that there appeared to be a double standard in the actions of Immigration, saying retired Lieutenant General Benny Gantz, a former chief of general staff to the Israel Defense Forces, had been able to come to Australia to “fundraise for” and “promote” settlements in the West Bank with little difficulty. Crikey‘s report on Monday also noted that Gantz doesn’t appear to have made comments about illegal settlements on his visit, but Friends of Palestine WA has pointed out to us that he was as a guest of the United Israel Appeal. The group, among other things, provides funding for Jewish communities in the West Bank. — Myriam Robin

Packer’s camera-shy. Pop diva Mariah Carey is starring in a new eight-part reality series for E! (and she really doesn’t want it called a “reality” show). We wouldn’t mention it if not for the fact that Carey is due to marry James Packer at a yet to be determined date. Alas, Packer, along with Carey’s twins, are off-limits. The New York Times reports the billionaire “does not want to be filmed”:

“’He’s a legit businessman,’ she said. ‘It’s not really his thing to be, like, traipsing all over Europe and hanging out with all my crew and dancers and singers.'”

Radio networks up for grabs. With media reform on the horizon, perhaps the question is less whether Fairfax will merge with Nine, and instead who’ll be buying up radio stations.

In recent years, operating costs have risen at both networks, Peters writes, as they competed fiercely with each other (ARN, which owns the KIIS and Gold stations, has largely been the beneficiary of the battle for ratings in recent years). But that doesn’t mean there aren’t profits to be had for anyone who acquires them:

“In 2015, the two networks together generated total revenues of $453 million from which they earned $140 million in EBITDA, resulting in a 30.8% blended operating profit margin, which would still be the envy of any local metro television or newspaper group.”

Offers for either network, Peters writes, would probably have to be north of $500 million to be attractive. — Myriam Robin

Front page of the day. An abortive comeback … 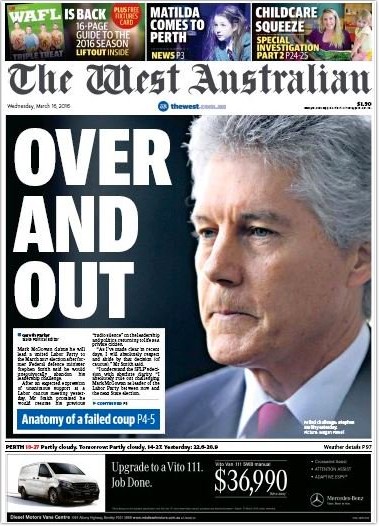 Want to know how to make money and control a government? Here’s how

Media regulation junkies may find this of interest…