The Deputy Prime Minister Barnaby Joyce leaps 11 places to a very solid second, driven largely by regional radio and TV, following former New England Independent MP Tony Windsor’s announcement that he was throwing his hat in the ring to try and unseat Joyce, with opposition to coal seam gas and the planned Liverpool Plains […]

The Deputy Prime Minister Barnaby Joyce leaps 11 places to a very solid second, driven largely by regional radio and TV, following former New England Independent MP Tony Windsor’s announcement that he was throwing his hat in the ring to try and unseat Joyce, with opposition to coal seam gas and the planned Liverpool Plains coal mine sure to be a big feature of his campaign.

The other big movers come mainly from the Senate crossbench, where desperate tactics to avoid a vote on Senate voting reform have included attempting to embarrass both the government and the Greens by forcing them to vote against debating their own legislation, in the touchstone areas of industrial relations and marriage equality, respectively. It’s amazing how imminent demise can sharpen the tactical blade of seemingly non-Machiavellian types like Senator Ricky Muir.

The increasingly grim-looking future of the Queensland Nickel workforce pushed PUP leader Clive Palmer up to third with over 10,000 items, and Greens Leader Richard di Natale jumped 10 places amidst much social media confusion as to why the Greens were voting “against” debating same-sex marriage.

Environment Minister Greg Hunt sneaked into the top 20 for what is a relatively rare appearance these days, as NASA released figures showing that not only was February 2016 the most anomalously hot month on record, but that it has smashed the old record by almost half a degree, a full 1.35 degrees higher than the long term average. So the Paris agreement to keep temperatures below a 1.5 degree increase should be easy, right? 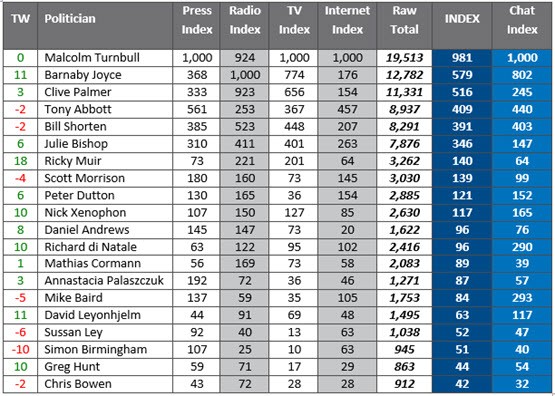 Former PM Tony Abbott was pushed down to a rare fifth, as online punters thankfully quickly moved on from the media’s obsession with insider gossip about his former chief of staff to discuss their delight at Barnaby’s new threat. A shame for Tony Windsor that very, very few of them are resident in New England.

Talkback has moved on as well, also showing a fair bit of interest in Tony Windsor, with plenty of callers remembering his role in the Gillard government less than fondly.

Turning up at 1am and drinking on stage? It’s all part of Madonna’s ‘performance art’, not at all a desperate attempt to grab some media attention in an increasingly uncaring world (don’t worry Madge, we still love you, just not nearly as much as we used to).