Preselection battle in Goldstein turns nasty ... are Bronwyn Bishop's days numbered? ... there, out in the darkness ...

Goldstein gets nasty. A report from inside the preselection battle that rages in Melbourne’s leafy south-eastern suburbs:

“Freedom Boy, Tim Wilson, is learning the hard way that ingratiating himself with the political conservatives doesn’t necessarily mean he’ll get a seat in Canberra or a pensioned afterlife. After giving up his lucrative position on the Human Rights Commission (HRC) to have a tilt at the seat of Goldstein, Wilson now finds he’s up against the [Michael] Kroger faction, which is campaigning hard against him in favour of Georgina Downer. The Safe Schools Program and same-sex marriage are apparently the hot-button issues for the Liberal preselectors in Goldstein and any candidate who shows any sympathy for either is being excommunicated. This puts the openly gay Wilson in the difficult situation of wanting to support freedom, equality and fairness while at the same time being confronted with the harsh reality that his chosen party does not.”

Bronny’s date with destiny. Is the end nigh for our high-flying former speaker? Says a tipster:

“The date for preselection for the federal seat of Mackellar currently held by 73-year old Bronwyn Bishop has been set down for April 16. Mrs Bishop is seeking another term but is facing a revolt from within her local branches plus formidable opposition to her re-election from within the federal caucus. It seems powerful forces in Canberra also share the view her time has come.”

Not everyone happy at ABC. Last week darlings of the ABC Leigh Sales and Annabel Crabb turned their popular podcast Chat 10 Looks 3 into a web series, debuting When I Get a Minute on iView. Just as in the podcast, which has existed for about a year, during the web series Sales and Crabb chat about the books, movies and TV shows they’ve been consuming. But Ms Tips hears that not everyone at the national broadcaster is happy about the show, with a small group of high-profile people not impressed. The disgruntled employees believe the pair are squeezing the last inches out of their brand, and that the show is not up to ABC standards. The web series is most likely here to stay, though Ms Tips suggests broadening the concept — maybe Tony Jones could make a guest appearance, or Antony Green could tell us what he’s been reading.

LGBTI Health Alliance falters. Problems within the LGBTI Health Alliance have come to a head, with two board members resigning on Friday. The not-for-profit peak body has been plagued by allegations of infighting at senior levels, and last week we reported that board members had spoken out against comments made by executive director Rebecca Reynolds in The Australian about the Safe Schools Program. Victorian director Luke Gahan resigned on Friday, and in a letter seen by Crikey, he took aim at the board chair and at the comments:

“At present, the Alliance is operating on a budget that has never been passed and which was presented to the board three months after the financial year began; we have lost our Federal funding due to an application that was poorly written … we have lost the confidence of our constituency and our members …

“Likewise, I have been asking for the budget to be discussed since the Canberra meeting — a meeting that was later declared invalid as the chair refused to allow a board member to participate (I note the chair’s apology at the meeting following). However, nine months into the new financial year we have yet to discuss or vote on the proposed budget. The Safe Schools debacle is just another example of what has gone wrong with the Alliance and the Alliance board, and this reflects badly on every one of us. It was neither consistent with our
beliefs (aged care?) nor was it consistent with our non-existent policies. We failed our members and we failed the LGBTI communities.

“I no longer believe that our members have an alliance that is focused on their needs … Consequently, I have no other way forward but to hereby resign as the Victorian Director of the National LGBTI Health Alliance.”

Fellow director Russell Flynn also resigned, saying he had been excluded from a board meeting:

“It is my view that this board and organisation are in peril from … opaque governance and management, poor engagement with constituencies, exclusion of board members from important deliberations, policy development and decisions. I am more than acutely aware of having been actively excluded from a board meeting personally, without notice nor reasonable explanation, by the Chair, I also view recent external messaging and policy on the run without inclusion of the board as amateurish and subsequent correspondence from the chair as ‘retrospective internal damage control’. Also, did the Chair truly threaten board members publicly with legal action as reported? That speaks poorly.”

“I will always be an ally if the mission of the Alliance, I only hope it will survive the current regime.”

Chair of the LGBTI Health Alliance Susan Ditter confirmed to Crikey that the resignations had taken place. She said processes and the organisation’s policy manual were being reviewed and said the 2017 budget was squared away:

“Our budgets are on track. The Board and Treasurer have worked line by line through the questions surrounding the 2016 budget. All spending has been accounted for and is in line with individual projects in support of LGBTI people. The draft budget for 2017 is due for Board approval next month and scheduled for endorsement by June 2017.”

Choose your enemies. Republican Presidential candidate John Kasich is giving out some interesting literature to supporters at his rallies: 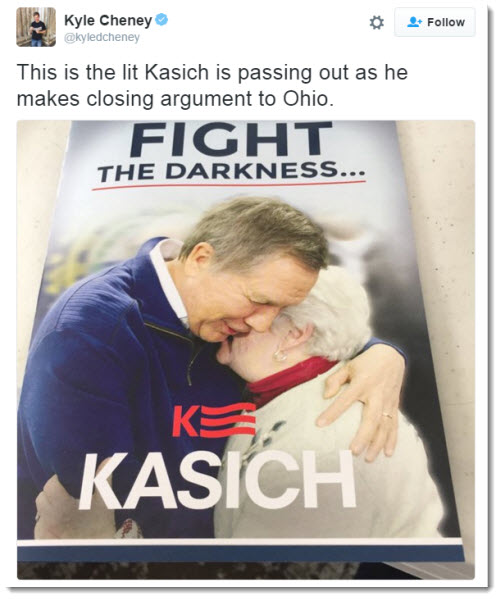 We’re not sure what the “darkness” is, that he refers to, whether it’s Trump, Cruz, Rubio, or the three combined. Or maybe he’s starting a career in exorcism.

So Mackellar is revolting? …. Then again they did elect Brony.

Kasich has a one-way ticket to hell… and back.