Cater does a Maurice. The search for the most asinine Australian article on Donald Trump continues, and we have a new entrant — yes, it’s Nick Cater! We were waiting to see what this champion would pull out, and in the Oz today, he did not disappoint. “Donald Trump’s primary appeal is that he is not a politician” is a masterpiece of received thinking on the matter and predictably error-strewn. But is he following in the footsteps of our own dear Maurice Newman and committing the sort of ham-fisted multi-part error for which the ex-banker is famed? We shall see.

The gist of Cater’s article is that Donald Trump, the fact-free thuggish rich-kid huckster, is essentially the same as Bernie Sanders, congressman then senator for Vermont and mayor of its largest city, Burlington, now held up as a model of urban revival across the nation. As Cater says:

“Both rail against the Trans-Pacific Partnership trade deal. Both promise upper-income tax hikes and the maintenance or expansion of welfare benefits.

“Neither supported the Iraq war and both complain about the corrupting influence of money in politics. Trump talks tough on immigration; Sanders promises ‘comprehensive reform'”

Fact-check? The  common opposition to the TPP aside, it’s almost all wrong, and sometimes the opposite of the truth. Let’s go through it.

1. “Both promise upper-income tax hikes.” Trump wants to reduce the highest income tax rate from 39% to 25%, abolish death duties and reduce compay taxes to 15%. Sanders wants to increase high tax rates, up to 78% for the very richest.

3. “Both opposed the Iraq war.” Sanders has been opposing US imperial wars since the 1960s. Trump said on radio in 2003 that the US should go in and take out Saddam. There’s no public record of him opposing the Iraq war. It’s a lie Trump has told that.

4. “Both complain about the corrupting influence of money on politics.” Trump is a self-funding billionaire who inherited his stake from his rich father — and who has bought and sold politicians for decades. The Sanders campaign is funded by 2 million individual donors, at about $70 apiece. Sanders wants campaign spending limits that would limit self-funding campaigns by the rich.

5. Immigration. Trump wants to deport 12 million “illegal” immigrants, 6 million of whom are visa overstayers. Sanders has supported amnesty for most classes of illegal immigrants, and is to the left of Obama on immigration, opposing the deportation of children and their parents.

The whole article is a Maurice! How can something be so casual with the truth — apart from the fact that Cater is an Essex University sociology graduate from the 1980s? Because the right is like that. They’re fantasists. And their capacity for fantasy is what has made Trump possible on the right.  — Guy Rundle

Four Corners journos free to go. Australian journalists Linton Besser and Louie Eroglu have been told they can leave Malaysia, after the Four Corners staffers were detained for allegedly crossing a police cordon while door-stopping the Malaysian Prime Minister.

ABC south-east Asia correspondent Adam Harvey tweeted that the Four Corners journos greeted the news with elation. As Crikey went to press, it appears the pair are still in Malaysia, though perhaps not for long.

The Malaysia Insider, operated by Edge Media Group, has shut down for “commercial reasons”.

The shutdown happened mere weeks after the website published a story into a corruption investigation being conducted concerning Prime Minister Najib Razak. The government responded by blocking the website. While the block is easy to get around, it’s speculated that it made it impossible for the free website to sell advertising in Malaysia. In a statement, Edge Media Group said it had been hoping to sell the website, but the block made it impossible to do so.

Last year, three of its journalists and two managers were arrested and charged with sedition over an inaccurate news report. —Myriam Robin

Hugh Marks, the company’s new CEO is cutting costs (a very weak half-year result and outlook is helping drive that), but there is also the faintest of hints that he is also cleaning out executives appointed by former CEO David Gyngell (who remains a director of the company). Marks hasn’t much time as the rival Seven Network is eating this year’s ratings battle and could have it wrapped up by mid-year, so weak has been Nine’s programming so far in 2016. The market reckons this is a real chance, judging by the way they have treated the shares of the two companies. Nine shares have lost more than 16% of their value so far this year, Seven West’s shares have surged and are up nearly 35%. By the way, Ten shares are down 35% so far this year. Is that why Foxtel is pushing up subscriber costs by $1 a month: to make up the losses on its 15% stake in Ten? — Glenn Dyer

Murdoch empire looking for cash. Foxtel, 50%-owned by News Corp (but managed by its appointees), has lifted its basic price for its 2.7 million pay TV subscribers (and not its Presto subscribers) by $1 a month — to $26 a month. That’s more than $33 million a year in extra revenue. It does have a higher sports rights bill to start paying in the next year for the NRL and AFL. News Corp Australia’s revenues and earnings remain under pressure and need a nice tickle. But in the UK there’s a much bigger deal, with the Murdochs ordering a 25% increase in the cost of the leading tabloid The Sun, whose cover price rises from 40 pence to 50 pence. That’s an extra 1 million pounds of revenue a week. News UK tried to hide the whacking great increase by announcing it the same day Trinity Mirror, owners of the rival tabloid, the Daily Mirror, lifted its cover price from 60 pence to 65 pence. That’s an increase half that of the increase for The Sun. The Daily Star, which halved its cover price last year, keeps its cover price at 20 pence and continues to increase sales, closing the gap on The Sun and Mirror. — Glenn Dyer

Front page of the day. The Age on August 1, 1966. Note the “200 youths in city gang brawl”. Back then it was the Mods and Sharpies. The full article is on Google News … 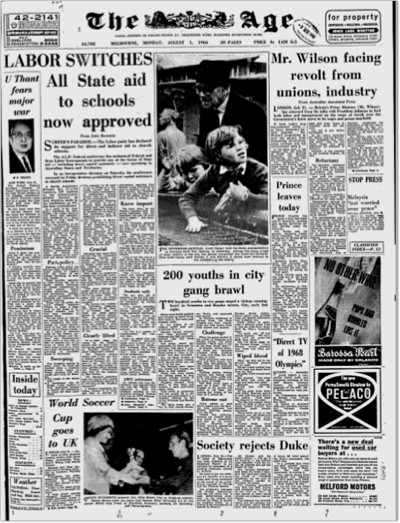 Fair go with Cater – you know how much trouble he has concentrating for a majority of the time…. “Look. There’s a leaf!”