Support for same-sex marriage has reached its highest level ever, but voters still want to decide the matter themselves rather than via parliamentary vote, Essential Report confirms this week.

The proportion of voters who support same-sex marriage is now 64%, up five percentage points from last October. Opposition has now dropped to just 26%, down four points. And there’s support across all voting groups: Labor voters split 74%-18%, Coalition voters split 52%-39%, Greens split 94%-2% and “others” 52%-33%, showing that even among socially conservative voters there’s now majority support for same-sex marriage.

However, support for a plebiscite remains strong despite the $150 million cost and declarations from far-right MPs that they would not honour the result: 66% of voters want the matter decided by a national vote, down a point since September, while 23% want a parliamentary vote, up just two points since September. And there’s not a great deal of difference between different voters on the subject — even Greens voters support a plebiscite.

The decline in Malcolm Turnbull’s standing with voters previously charted by Essential and Newspoll has also continued in the attributes voters see in Turnbull. Since Turnbull became prime minister in September, the proportion of voters who believe he is “a capable leader” has fallen six points to 64%; those who says he “understands the problems facing Australia” has fallen 10 points to 53%. On “visionary” he’s fallen seven points to 44%; “out of touch with ordinary people” is up seven points to 53%; on “superficial” he’s up six points to 43% — but on “aggressive”, the Prime Minister is down 14 points to 24%. 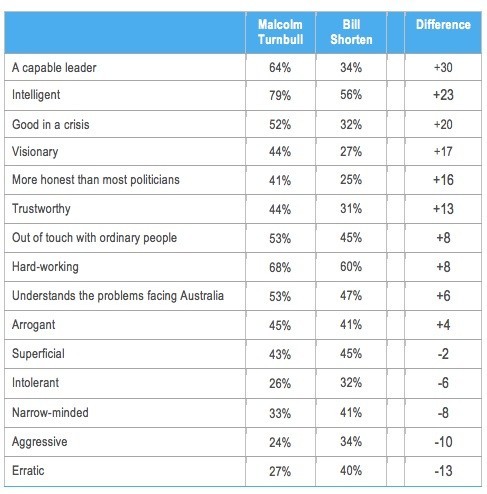 Turnbull also leads Opposition Leader Bill Shorten on on most positive characteristics and trails on negative characteristics, except “arrogant” (Turnbull 45%, Shorten 41%) and “out of touch with ordinary people” (Turnbull 53% Shorten 45%). Turnbull is also easily the preferred leader of his party, with 39% saying he makes the best leader of the Liberal Party (down from 42% in December) while just 15% say Bill Shorten is the best Labor leader (up from 13% in December). Tony Abbott remains the preferred Liberal leader of 9% of voters, while Julie Bishop is on 12%. For Labor, 14% prefer Anthony Albanese or Tanya Plibersek and 18% prefer “someone else”.

On voting intention, the parties remain locked at a two-party preferred outcome of 50% each. The Coalition is down a point to 42% and Labor is also down a point to 36%, while the Greens are up a point to 11%. This is the third week the major parties have been deadlocked at 50%-50%.

And when the government frames the plebiscite question in such a way to force a “no” vote like Howard did for the Republic question how will these supporters feel then?

I suspect you could insert pretty much any issue into that question and get results showing that people wanted more say in it. The people rarely, if ever, want _less_ involvement in democracy.

But if something as significant as the TPP can get through without even be properly explained to the people, it boggles the mind anyone could argue an issue as mundane and trivial as same-sex marriage requires a plebiscite and keep a straight face.

The Greens, under the leadership of Richard di Natale would want a plebiscite-a system that is the most expensive option.

WTF can’t the people we elect arrive at a conclusion? This is a prime example of governments churning through the voters hard earned as if it was confetti.

Just how supine can an electorate be? I don’t have a problem with same sex marriage. BIG BUT, I do have a problem with the entire nation deeming it to be of greater importance than the budget, or nutting out a way to remove the Jesus junkies from the Liberal Party. Vacuous turds.

The Greens, under the leadership of Richard di Natale would want a plebiscite-a system that is the most expensive option.

That would be a dramatic about turn to their previous position (from last week).