“There’s an interesting little battle raging in Mackellar between two giants of the past which most political junkies are missing out on because both the players are yesterday’s people so the majors aren’t bothering to report it.  So far the stoush has only received coverage in the local rag, The Manly Daily, with a tiny side-bar by the same reporter in The Daily Telegraph. It’s all about Choppergate.

Nikki Savva’s book asserts it was Abbott’s office that told Bronwyn Bishop to hold off apologising for the profligacy she displayed in hiring a helicopter to take her to a party function.  Shortly after this news was first reported last Sunday Bishop’s office issued a statement saying she had nothing further to add thus seeming to confirm the reports.  The Savva information actually changes the dynamics and helps to explain why Bishop turned her back on Abbott to vote for Turnbull. If true.

This has enraged the former prime minister, Tony Abbott, who holds the neighbouring electorate of Warringah. Abbott came out swinging and flatly denied the report, saying he wanted her to apologise and pay back the cost immediately. A couple of Abbott’s former staffers were also angry enough to come out on the record backing Abbott’s version.

What we do know is that Abbott and Bishop, once great friends and right-wing allies, are now mortal enemies involved in a fight to the death. Abbott’s former campaign manager, Walter Villatora, was first to nominate against Bishop brandishing a reference from the former PM. With this kind of behaviour on display it’s no wonder most federal Liberals would like to see the back of both these troublesome MPs.  Disunity is death, and they’re hanging it out for all to see.”

Gary just a shadow of former self. Greens deputy leader Scott Ludlam took the plunge this weekend, taking part in the World’s Greatest Shave to raise money for the Leukaemia Foundation. Donors to Ludlam’s cause could choose whether they wanted to save “Gary” (Ludlam’s mop, thus dubbed by former Crikey cartoonist First Dog on the Moon) or shave “Gary”, with the pro-shave movement winning out in the end. Ludlam’s fellow West Australian Senator Rachel Siewart got to do the honours, removing Gary carefully over about 10 minutes. Ms Tips is disappointed they only went for a No. 2, though — that seems more a buzzcut than a full shave. 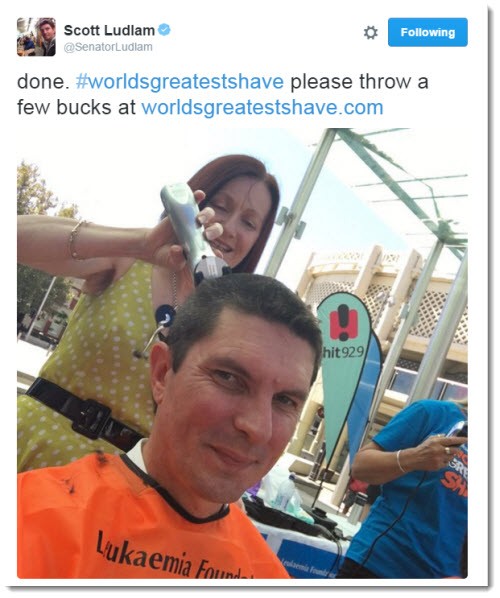 Another questionable Christensen campaign. Queensland MP George Christensen has long been known for his interesting political tactics, but we can’t take this one seriously. The red Coles “down, down, prices are down” hand, along with “#fingerout” is not a recipe for success: 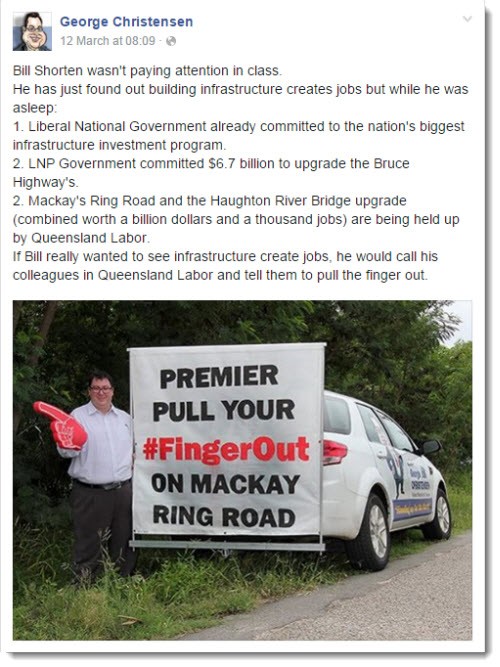 Careful who you approach. Campaigning in the streets in the Riviera of Melbourne is in full swing, and one Liberal looking for support made the mistake of approaching the husband of the ALP candidate, Peta Murphy: 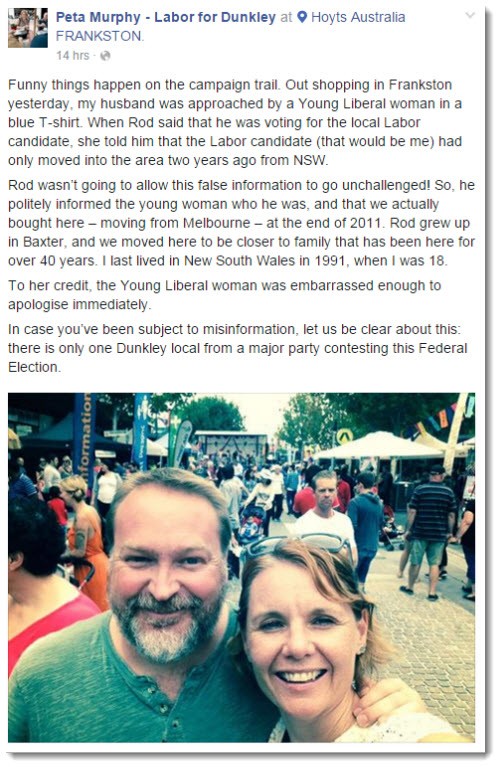 In Christensen’s defence, the integers are tricky and a lot of infants don’t know what comes after 2.

Which “class” would that have been George Skywhale – your class? The won wear ewe leaned two Right and cont?
As for “pulling the finger” out – where would a balloon your size land if you did?

Clownshoes thought it was such fun when the demented crone was 94Aing our democracy..

What a pity they can’t both lose – “Abbott and Bishop … involved in a fight to the death.” – then we, the People would WIN!