The Australian workforce is shifting rapidly into services -- especially health and care services -- while traditional production industries decline. We take a look at what the workforce will look like in 2020.

The Australian economy of the early 2020s will be one in which manufacturing has become a niche employer, and meeting our need for nurses, doctors and childcare workers will be the greatest workforce challenge, if current trends persist.

Crikey has used ABS workforce data to track workforce trends over the last five years to see how Australians will be working in coming years. And there’s unlikely to be any change from the historic shift from manufacturing and production industries to service industries that has driven the reshaping of the Australian workforce in recent decades, notwithstanding the mining boom.

Indeed, mining has fallen as an employer since the heady days of 2012 when it employed over 270,000 people; in the November 2015 quarter, that was down to a quarter of a million. Unsurprisingly, coal and iron ore mining have borne the brunt of cutbacks, though resources exploration continues to hold up. Mining is still bigger than at any time up until 2011, but it will always be a tiny employer — at the end of last year, it employed less than 2% of the workforce.

The last five years have been tough for manufacturing. Since 2010, the once-mighty sector has shrunk from 977,000 jobs to 860,000 and now employs just 7.4% of workers. If that continues over the next five years, manufacturing will be employing just over 6% of the workforce in 2020. A point in its favour, however, is that most of the damage was done while the Aussie dollar was around parity, or above, with the greenback. Since the end of 2013, the rate of decline of the manufacturing workforce has slowed, meaning it will only fall to just over 7% if the sector isn’t again hammered by a strong Aussie dollar.

Not all of manufacturing has struggled. The food and beverage manufacturing sector has actually grown, along with chemicals and petroleum manufacturing. But these aren’t the big subsectors; in terms of employment, manufacturing is dominated by metal, car and machinery production, all of which have fallen significantly in recent years. And what’s left of the automotive industry is scheduled to close well before 2020.

One sector has more than outstripped the losses in manufacturing, however. Since 2010, the overall Australian workforce has grown at just under 7%, but the health and social care industry (including aged care and childcare) has grown at well over twice that rate. In the last five years, it has added over a quarter of a million jobs; in 2015 alone, it added 130,000 jobs and grew, as a proportion of the whole workforce, by 1%. If it maintains the growth rate of the last five years, health and social care will grow by another 250,000 jobs by 2020 and reach over 14% of the workforce.

As it happens, that was exactly the five-year prediction that the Department of Employment made in 2014, when it predicted the sector would grow by 258,000 in the five years to 2019, driven by an ageing population, the National Disability Insurance Scheme and growth in childcare demand.

That presents a significant workforce and skills challenge, especially given that the government is under pressure to improve the quality of both aged care and early childhood education — sectors that pay comparatively poorly compared to related sectors like education and nursing.

Combined with the decline of manufacturing, it also presents a gender challenge. Just 26% of the manufacturing workforce are women. But women make up 78% of the health and social care workforce — and over 80% in some sectors, like childcare. So a sector dominated by men is shrinking rapidly, while a sector dominated by women is already significantly larger and growing even faster. That can be seen in the fact that women now make up 46.4% of the workforce compared to 45.4% five years ago and 45.1% in 2005. The obvious answer is to encourage men into services occupations like caring and nursing, but that’s a major cultural challenge with no obvious solutions beyond the blunt force of the market at this point. 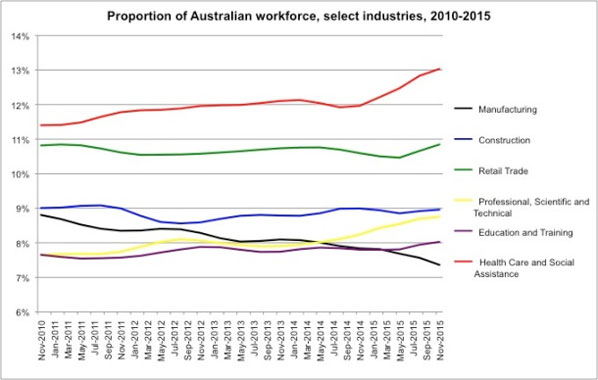 The Department of Employment also predicted big growth for the education sector — which passed the 900,000 workers mark in 2014. It expected the sector would need a further 143,000 people from 2014-19, which would be a significant acceleration from its growth over recent years, driven by “above-average growth in the school-aged population” and “improving strength in the international education sector” fueled by the lower Australian dollar. One of those assumptions is demographic, but the other is very dependent on external factors.

They also suggested a big rise in the more generic professional services category Professional, Scientific and Technical Services (there’s a definition here). That grew even more rapidly in the last five years than health and social care, and in 2015 passed the 1 million mark. It’s a disparate category of professions, from architects to vets, but in gender terms looks a lot more like the whole workforce, which splits 54%/46% to men; the category is 44% women. If the growth of the last five years is maintained (which is faster than the Employment Department predicted) the sector will have more than 10% of the workforce in 2020.

Employment also predicted construction (the most male industry, with nearly 90% men) would expand significantly, but it’s hard to reconcile that with its performance over recent years: despite the residential building boom in Sydney and Melbourne, the sector has barely grown in terms of overall workforce and, in fact, shrank slightly in 2015.

The other big sector, retailing, has held its own in terms of share of the workforce, and at the end of 2015 was employing its highest ever number, just below 1.3 million of us (just under 11% of the workforce), around 55% of whom are women. Another service sector (and one that also has a high level of part-time employment), accommodation and food, has been slowly growing its share of the workforce and now employs over 7% of us. That’s been propelled by the rise and rise of the hospitality sector; despite incessant bleating from business about penalty rates (and the vigorous efforts of the nanny statists to kill the Sydney hospitality industry with lockout laws), employment in the food and beverage service subsector has risen 10% in the last five years. If that continues, we’ll need an extra 78,000 baristas, wait staff, bartenders and chefs by 2020.

The other declining traditional sector, agriculture, shrank its workforce by over 8% over the last five years and seems destined to soon dip permanently below 300,000 workers, which it did briefly in 2013. And if you’re in the public sector, things aren’t as gloomy as you might think; the sector has held its own as a proportion of the workforce and currently employs 6.3% of workers — though that includes ADF personnel and police as well.

The Australian workforce of 2020 will thus be more female, more service-oriented and less manual and production-oriented than ever before.

Since there is a limit to the number of manufactured items that most people want, increased in living standards must involve more services.

And with an aging population there will be plenty of demand for services.

There is also unmet demand for services for partially incapacitated people of all sorts.

The main issue is working out how to pay for these services and thereby keep a reasonable proportion of the population with permanent employment.

True, Peter. I can’t see where a society’s wealth comes from when its people’s main occupation is providing services for each other.

” I can’t see where a society’s wealth comes from when its people’s main occupation is providing services for each other.”

This is a key issue. Is wealth found in:

Personally I consider that a good life does not require maximizing possessions.

It’s all very well increasing ‘service sector’ workers, but the country has to afford to pay for them somehow, which in the past was ‘making stuff’. I can’t see how this has changed. Manufacturing employed lots of less academic people, who are the ones we now see as unemployed. Is this progress, I don’ think so.

Jane – this country has NEVER paid its way “making stuff’ unless you consider wool & wheat as ‘making’.
It was always a farm & mine, as source of raw materials like other colonies in the daze when Britannia Waived the Rules and the majority of heavy engineering was Empire Preferred.
Our manufacturing industries were sheltered workshops to stop those surplus to requirements scaring the horses.
PeterD has it – the single growth industry will be care of infirm and the aged.
The latter will control the majority of assets and want the best, i look forward to rock&roll retirement homes with nubile staff of all sexes & proclivities and a wide open pharmacopoeia.