The Australian is not thrilled Matthew Ricketson is joining the Press Council. Plus other media tidbits of the day.

The Oz unleashes on Ricketson. The appointment of Matthew Ricketson to the Press Council, mentioned in this section on Friday, has prompted a furious reaction in The Australian.

“Matthew Ricketson deserves no blame for his appointment to the Press Council. To criticise him would be as senseless as blaming a rabid dog for having rabies.

“The blame rests with those who have overlooked his innate nature.

“When the journalists’ union chose Ricketson to be its representative on the Press Council, it was a decision worthy of those who would avert their eyes from the true nature of a mad dog and hand it to a child as a playmate.”

The reaction harks back to the paper’s furious stance on the Finklestein inquiry in 2012, of which Ricketson was a co-author. The inquiry prompted the institution of a government-mandated New Media Council to combine the two press regulators, the industry-funded Press Council (which handles print media) and the government-funded Australian Communications and Media Authority (which handles broadcast). New Media Council plans never came to fruition.

In his piece today, Merritt points out that the proposal of the Finklestein inquiry was for the New Media Council to have been able to “enforce its decisions through court orders” (make courts force newspapers to publish adjudications), exposing journalists to fines or prison for non-compliance. This argument has been made before — Ricketson responded in a piece carried in the Walkley Magazine by saying that the Press Council already had the power to force adjudications be published.

Ricketson is also on the record saying self-regulation, as provided by the Press Council, “does not work”. He noted in an opinion piece in Fairfax in 2012 that the APC was badly funded and “industry players can come and go as they please, which they have done”.

In the months following this piece, Press Council chair Julian Disney secured agreements from the publishers in the APC that they would have to give four years’ notice to leave, and could not suddenly cut funding, boosting the power of the council that Ricketson now joins. — Myriam Robin

Correction: An earlier version of this brief said publishers had to give two years notice to quit the Council. They actually have to give four.

Journalists detained in Malaysia, again. Four Corners reporter Linton Besser and camera operator Louie Eroglu have been detained by Malaysian police after attempting to question Prime Minister Najib Razak about a corruption scandal. The pair were arrested after they approached the PM in the street in the city of Kuching on Saturday night, the Australian reports. They were released yesterday without charge but have been told not to leave the country.

SBS chief political correspondent Catherine McGrath tweeted that this was not a new story with Malaysian officials; she was arrested in 1996 while doing a story on the same subject.

The regime of Najib Razak has recently been plagued by allegations of corruption that, bizarrely, have done little to dent the power of the Prime Minister. The Economist noted this week:

“At the heart of the scandal are hundreds of millions of dollars that for unclear reasons entered bank accounts belonging to the prime minister, Najib Razak. You might think such a revelation would unseat Mr Najib and spell ruin for his United Malays National Organisation (UMNO), which has held power since independence. Instead, Mr Najib appears to have strengthened his grip, by purging critics within the cabinet and police.”

Save our ship. More special interesting pleading from the free-to-air and pay TV industries this morning in Fairfax papers as they urge the federal government to get rid of licence fees completely. Naturally the free-to-air industry sees that as essential (as they have been arguing for the abolition now for years), while pay TV has weighed in with a charming bit of rent-seeking of its own. It wants its own deal, despite being controlled substantially by the Murdoch clan and its News Corporation, a major media group and bigger than any of its rivals.

The bottom line is that the federal Communications Department is reported to have recommended that the fees be abolished (4.5% of revenue or around $140 million a year). But this is a budget matter and will have to be approved by cabinet and included in the budget. The free-to-air networks have already got most of what they want (but not News Corp and Foxtel) in terms of plans to abolish the reach rule and the ownership controls. This proposed “reform” won’t see the light of day before early 2017 if there is a double dissolution election, and the FTA industry has yet to provide anything concrete in terms of a trade-off for the licence fee abolition except vague commitments to spend more on production.

The networks are already spending more on productions because viewers increasingly prefer Australian content over imported (which is now more expensive because there are few if any production deals, and the value of the Aussie dollar is down more than 20% in two years, which boosts the effective cost of US and UK products). But Nine and Seven both face large increases in the annual costs of their NRL and AFL broadcast deals from 2017, and their share of the licence fees would help ease the pain of finding the extra tens of million of dollars a year for that, as well as making more local content. They also want the producer offset raised from the present 20% to 40% in the name of producing more local content.

But they have all been silent when the current federal government has slashed Screen Australia budgets, reducing the amount of money available for co-productions. That silence was obviously to keep the government on side in the campaign to get rid of the licence fees, but in typical style of wanting everything from taxpayers and delivering little, the TV networks now want the producer offset doubled — ignoring the shredding of Screen Australia’s funding.

Pay TV wants in, having seen the favourable recommendation from the Communications Department on the licence fees. Andrew Maiden, chief executive of the pay TV lobby group ASTRA (the Australian Subscription Television and Radio Association), told Fairfax Media that any licence fee cuts must be accompanied by reductions in regulated benefits that free-to-air television gets. ASTRA is of course talking about the sports anti-siphoning laws and wants that reduced. — Glenn Dyer

Front page of the day. Gang violence on the front page … 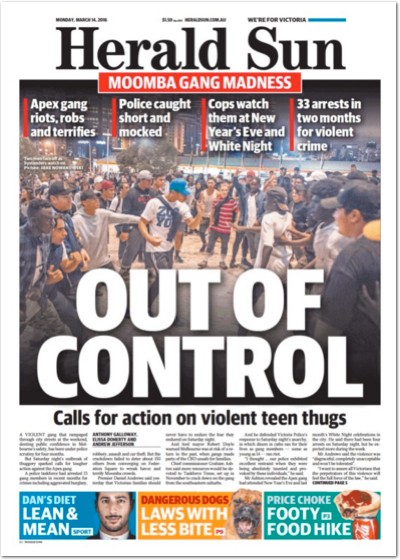 Obama Birthers take over The Australian