Long campaign already started. A tipster tells us that Labor is already getting mileage off rumours of a Greens-Liberals preference deal:

“Labor has been calling members and supporters (anyone in their databases really, could be non-supporters also) to tell them they’ve received word of a definite done deal between the Greens and the libs on preferences, whereby the Libs would preference the Greens in exchange for the Greens running open tickets in marginal seats.”

We have obtained a recording of the call (audio here), and it seems to be more related to the Senate voting reform deal. The caller says she is “incredibly worried” about the deal between the Liberal Party and the Greens on Senate voting reform and asks for people to call Greens leader Richard Di Natale.

Think of the concierges. We reported yesterday that Canberra’s restaurants were in chaos with busy journos booking their post-budget dinners in anticipation of an early budget. Now a bit of research shows that Canberra’s hotels are looking quite full too. According to Wotif, hotels in the Capital Hill area are 60% booked for the night of May 3, while only 30% are booked for the week later — is that interstate journos hedging their bets on an early budget? Or just holiday-makers choosing a midweek May sojourn in the nation’s capital?

Greens really do want a Liberal PM.  Everyone knows Barnaby Joyce is squaring up against Tony Windsor in New England at this election, but the Greens announced in August last year that their candidate for New England would be Mercurius Goldstein. Ms Tips thinks that is a fantastic name for a candidate, though perhaps more suited to the electorate of Goldstein?

A quick Google brings up some of Goldstein’s opinion articles. One such article from 2007 stated he hoped that Malcolm Turnbull, then the environment minister, would be the next Liberal prime minister, and he lamented that Turnbull would not friend him on Facebook.  He even foreshadowed some of Turnbull’s much-vaunted agility:

“I believe Turnbull’s ‘flexibility’ is another manifestation of the boldness that one needs to succeed in public life.”

No doubt we’ll see this pop up as Labor continues to campaign on the claim that the Greens are doing deals with the Liberals to re-elect Turnbull as prime minister.

Don’t google chipmunks. One of the very few legacies left by Joe Bullock, the Labor Senator who resigned because he couldn’t handle Labor Party support for marriage equality, is an anti-porn inquiry he set up a few months back. Most of the submissions are now in, and they’re mostly members of the public calling again for the unpopular mandatory internet filtering scheme to be brought in.

Some of them paint sorry tales of people who were just trying to look up innocent content and were bombarded with ladyparts. Be careful what you google, people.

Putting on her IT support cap, Ms Tips attempted to replicate the issue, but to no success. Is it possible the concerned writer might have accidentally searched for the wrong rodent? 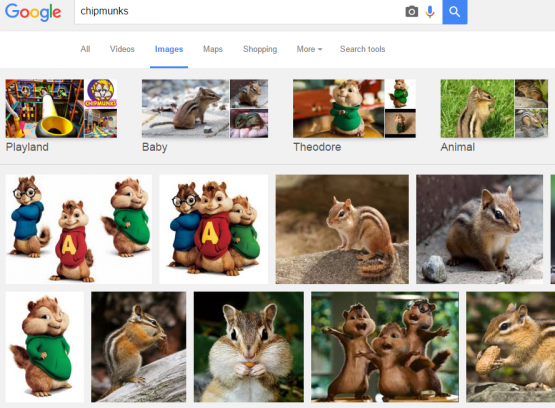 That’s not how you do it. Ms Tips is starting to think the Ideas Boom is more about selling a new Prime Minister than anything actually useful, going by this image of the potentially dangerous use of a soldering iron. 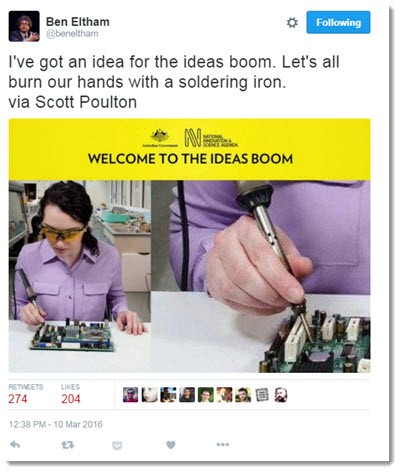 Billson to campaign for his successor. A tipster suggested to us that outgoing MP for Dunkley, and the ever-cheerful former minister for small business Bruce Billson, would not be campaigning for the Liberal candidate to replace him, Chris Crewther. Billson however, could not be more emphatic that he will be on the hustings for Crewther. He told Crikey the claim was “rubbish” and he had been campaigning for the Liberals for over 20 years. He described Crewther as “a very able and talented individual” to replace him in representing the area Billson has described as “Melbourne’s Riviera”. Crewther is a recent resident of Frankston, after previously being unsuccessful in his last attempt to get into Parliament in the seat of Mallee at the 2013 election. Crewther faces former criminal defence lawyer Peta Murphy as his Labor rival, but Billson has enjoyed a 5.6% margin in his favour in the seat.

Garrett going? A tipster suggests that Victorian Consumer Affairs Minister Jane Garrett will be attempting to leave her seat of Brunswick:

“Senior ALP officials confirm that Victorian Consumer Affairs Minister Jane Garrett is abandoning the latte sippers and anti-vaxxers of the inner Melbourne seat of Brunswick. On first preferences, the Greens beat her in 2014 by nearly 700 votes. The word is she is heading to Melton and probably will get it. But the ambitious politician — Yarra Council, Victorian Labor, federal Vice President — is fighting against her own friends for the seat.”

We attempted to confirm with Garrett’s office but did not hear back by deadline. The current sitting member for Melton, Don Nardella, has given no indication he will be retiring.

The Senator for the IPA. After being confirmed as a Liberal Senator for Victoria, the IPA’s James Paterson this week emailed his colleagues at the right-wing think tank to detail the policy areas he will pursue in Canberra. He lists getting the carbon tax repealed, fighting for freedom of speech and vowing to reform section 18C of the Racial Discrimination Act. Although there to represent Victoria, Patterson says he will be in the Senate to “fight for the exact same things as I have in my time at the IPA”.

“If know if I ever fail to do so that IPA members will be the first to let me know where I have gone wrong!”

And speaking of the institute, by the sounds of it, fellow ex-IPA spokesperson Tim Wilson’s attempt to gain preselection in Goldstein isn’t going quite as well as he’d planned, with reports he is second in the votes behind Denis Dragovic, with the votes decided next weekend. Now with Paterson gone, if Wilson finds himself out of a job, could he potentially go back to his old stomping ground?

Whether the Power Brokers arranging these calls currently hold ACTU positions or are in front organisations such as the ALP, it doesn’t really matter a great deal.

She was right. I’d never seen so many great recipes for chicken breasts…

Nahh, in the interest of science, I just typed ‘beavers’ into Google Images and got much the same sort of innocent selection as ‘chipmunks’. Perhaps the good christian complainer, is still stuck in some sort of elaborate, but incompetent, ruse, to justify to his wife, as to why he was looking at female genitalia on the internet

That’s not “potentially dangerous” use of a soldering iron – it’s “definitely flesh burnt off”.

Let’s hope James Paterson spends all his time trying to get the carbon tax repealed.