How The Australian made Safe Schools a target

The campaign against the Safe Schools Coalition follows a well-established formula.

The independent review of anti-bullying program the Safe Schools Coalition is due to be handed to government today. But how did an almost two-year-old program, which was launched under the Abbott government, suddenly become a front-page “controversy” worthy of a review? The answer is Australia’s national broadsheet.

Almost 16,000 words were written in The Australian about the Safe Schools Coalition in the month since the newspaper “broke” the story about the anti-bullying program being taught in Australian high schools, with more weight being given to voices speaking against the program than those in support.

Since February 10, the paper has published 27 articles about the program: 18 news articles, three opinion pieces, two editorials and three editions of Cut & Paste. So how does the national broadsheet go about trying to turn public opinion against a program that had existed without controversy for years?

The first piece appeared on February 10, a news article by education editor Natasha Bita on the front page with “exclusive” splashed in red ink.

The next day, the paper included another smaller piece by Bita, as well as an editorial, which stated “we should question why Australian children are taught an activist curriculum when their literacy and numeracy rates are alarmingly low”. 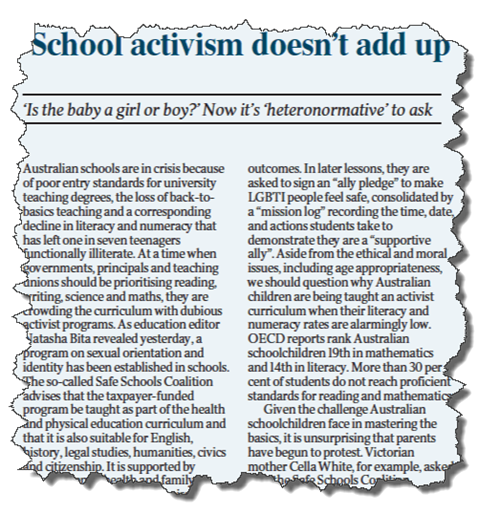 Over the next few weeks, articles would appear in bursts, mostly by the Oz‘s press gallery journos as they quoted various politicians attacking or defending the program. The paper also published three opinion pieces, all criticising the program, two by Angela Shanahan and one by Jennifer Oriel. 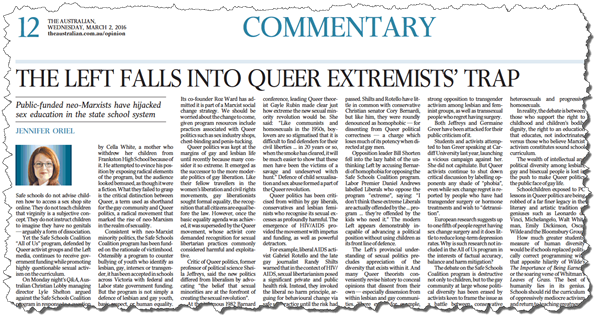 Crikey‘s analysis of the page space given to the issue doesn’t include letters to the editor, but we did include three days of Cut & Paste targeting the program and one of Safe Schools’ co-ordinators, Roz Ward.

The paper quotes more than twice the number of people attacking the program as defending. Conservative education academic Kevin Donnelly is quoted twice. Education Minister Simon Birmingham is quoted most often defending the program, while senators Cory Bernardi and George Christensen feature prominently as detractors. Opposition Leader Bill Shorten’s defence of the program was given detailed attention on the website, but only a small article appeared in the newspaper.

The Australian is well known for its journalistic campaigning, and the latest campaign against the anti-bullying Safe Schools program is by the book.

In 2014, former Oz media writers Andrew Dodd and Matthew Ricketson looked at the anatomy of an Oz hate campaign. They listed the four main weapons deployed against a target:

“First, [The Australian] unleashes a torrent of articles contesting even the tiniest of points, so as to wipe the critic’s original point from everyone’s mind; second, it attacks the critic personally and pitilessly; third – somewhat paradoxically – it ignores the critic; and fourth, when all else fails, it simply continues asserting something as true as if no one has ever shown it was false.”

The campaign against the Safe Schools Coalition follows this formula somewhat, with eight articles in the first week, three in the second week, 13 in the third and five in the fourth week. The momentum was strongest when the paper quoted former prime minister Tony Abbott saying the program should have its funding cut (even though he launched it), as well as Liberal MPs calling those who supported the program intolerant.

Of course, The Australian isn’t the only news outlet to focus on the program, with the rest of the media following suit as more and more politicians added their two cents. But it was the paper’s relentless campaigning, along with that of conservative MPs, that eventually led Prime Minister Malcolm Turnbull to call an inquiry into Safe Schools.

It’s unfortunate the media refuses to discuss the collapse of standards at all levels, including that of the people entering what has become the Australian Education Industry.

This illustrates one of the reasons I stopped subscribing to ‘the Australian’. Not only does it have agenda, but it also prosecutes them in a vicious unfair manner.

A while back, Tim Flannery published ‘Here on Earth’ (admittedly, not one of his better books). Not only did ‘the Australian’ have an editorial attacking it (is a book really worth having an editorial?), but ‘cut and paste’ on the same day attacked Tim Flannery, part of which included a recent study suggesting that the extinction of Australian megafauna was due to climate change and not over-hunting by Australian Aborigines when they arrived here around 60,000 years ago, as proposed by Tim Flannery and expanded on in ‘the Future Eaters’.

Part of the attack included the snide question as to whether Tim Flannery accepts climate change. And actually, over-hunting is still the accepted explanation for the extinction.

Really follows the pattern of their campaign against Gillian Triggs where, for a couple of weeks before she even released the Children in Detention report there was a barrage of negative articles about her.

They would have known the message wasn’t going good so they started attacking the messenger before she delivered it, pre-emptively diverting attention.

Rupert’s Thugs? Does anyone pay attention to him, or them anymore? Surely we learnt not to after 2013?

The blatant bias so often shown in the Australian must reduce its readership. Who pays to read crap?

Thus I conclude that the Australian is in terminal decline and is being used as a disposable political asset.