Budget CHAOS. Canberra is abuzz with talk that we could be heading for a May 3 budget, a week earlier than usual, and while that would mean we’d also be heading for an early election, the more important consequence is what it would mean for the social calendars of political reporters, staffers and other insiders. It looks like the rush is already on:

It’s also been pointed out that the whole budget process is a huge logistical exercise — have the printers been notified that they’ll be needed a week early?

Utegate is back. According to a caller to 2UE this morning, things could be about to get very awkward for Prime Minister Malcolm Turnbull — apparently a TV network has interviewed Godwin Grech and will be airing a story about the Utegate episode. Who could it be? If you know more, drop us a line.

Cut and paste. For those with long careers, things written and uttered have a habit of coming back to bite. Here’s Road to Ruin author Niki Savva on RN Breakfast this Monday about why she didn’t contact Tony Abbott and Peta Credlin for comment:

“I learned from bitter experience over a number of years, as did many of Abbott’s colleagues, that many versions of events that he put forward just could not be trusted.”

But what’s this? Niki Savva six years ago in So Greek: Confessions of a Conservative Leftie (her tell-all on working for Peter Costello):

“When it comes to scheming and lying, plain old hypocrisy, and dishonesty, journalists — apart from a few honourable exceptions — win hands down.”

Is she one of those exceptions? Another quote from the book (recounted by Laurie Oakes in The Courier-Mail — her critics have been passing this around of late):

“As a journalist I lied often, usually about my sources, but about other things too. Journalists can and do get away with lying: politicians and staff can’t.

Menzies. Yesterday we reported on a rumour that the role of ambassador to the Vatican was being kept open as a lure to prise  Kevin Andrews away from the seat of Menzies. One tipster thinks we were off the mark:

“I read with interest yesterday’s tip about Georgina Downer potentially running in Menzies should dumped Minister Kevin Andrews take an ambassadorship to the Holy See later this year. This tip is wrong in two important ways. Firstly, there is no way PM Turnbull would waste an ambassadorship on Kevin Andrews. It is simply not going to happen. Secondly, whilst Georgina Downer has expressed interest in running for Menzies, she knows she has no chance given that Melbourne Barrrister and decorated war-veteran (Afghanistan) Keith Wolahan, has the numbers in Menzies wrapped up. Moreover, Wolahan is a local in Menzies, well known and liked, whereas Downer, does not even reside within Menzies.”

Of course, we’re always keen to hear more and you can remain anonymous if you wish.

Please clap. Former treasurer and now Australian ambassador to the US Joe Hockey tweeted this photo with failed Republican presidential candidate Jeb Bush this morning. Maybe it was a meeting of a failed political ambition: 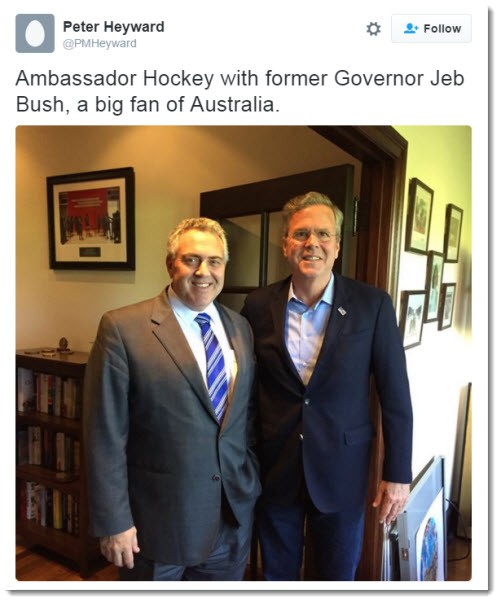 Environmental degradation. Yesterday students in the University of Melbourne’s bachelor of environments programe received an email telling them that there wouldn’t be an intake for the degree in 2017. While the degree will be taught out for current students, those who deferred an offer and were expecting to start in 2017 are unsure of their future. The FAQ sent around to current students yesterday made no mention of students who had deferred offers. This year the university took just 489 students into the course, well below the thousands admitted to its science and arts degrees.

Instead of offering the degree, which was one of the six broad degrees introduced under the Melbourne Model almost 10 years ago, the university is introducing a bachelor of design, absorbing a number of the majors currently available in the bachelor of environments. The degree will be housed in the university’s school of design building, which was completed in 2015. Curiously, the major of environmental science will not be available in any degree, but a number of related options remain in the bachelor of science. We contacted the university this morning to ask what would happen for deferred students who graduated at the end of last year, but didn’t hear back by deadline.

LGBTI Health Alliance ructions. Many in the LGBTI community were confused yesterday when one of the voices quoted criticising the Safe Schools Coalition in The Australian belonged to Rebecca Reynolds, executive director of the National LGBTI Health Alliance, who told the paper that she “does not feel the program should be mandatory”. Since then, two members of the board of the LGBTI Health Alliance have distanced themselves from the comments, with one saying the decision had not been put to him and he wouldn’t support it if it had. Deputy chair of the board Gina Wilson told blogger Doug Pollard:

“I have been contacted by several community organisations in respect of it. I speak here as Deputy Chair of the LGBTI Health Alliance. This is not a position that has been put to me and to the best of my knowledge the Alliance Board. If it had been put to the board for a vote and it was approved I would , as has been suggested by a few I should, have resigned.”

“I support the Safe Schools Program and the research that underpins it. I especially support the recommendations that flow out of that research that suggest that Safe Schools should be rolled out to all schools and should be a compulsory resource. I support without equivocation the safety of all students at school and their human right to that. I support without equivocation the compulsory introduction of Safe Schools programs that promote student safety and the prevention of bullying and intimidation at school.”

This morning Crikey contacted the LGBTI Health Alliance to ask how they had come to this position and why the board had not been consulted. Board chair Susan Ditter said that Reynolds had followed the appropriate delegations of authority in commenting and that she stood by her sentiments.

“We have a very clear process of delegation and Rebecca followed that, the point of view we put was absolutely in line with values of the organisation.”

“We have no control over how a journalist puts things together, and I think that us having the same position as the ACL may have disquieted some people.”

“We take the position of working with people and not challenging people so we are in support of the way the Safe Schools Coalition is working now, where schools choose to work with them, so we’re not saying anything different to what is happening at the moment, and I think that the disquiet that has happened is a serious misreading of what we’re saying. We’re in absolute support of the Safe Schools program”

Ladies MIA. This photo was posted by Transdev on International Women’s Day, and was promptly removed from the transport operator’s website after it faced backlash. Although it wasn’t the only panel at the IWD event, a panel of seven men talking about what women want to get into the industry wasn’t a great look: 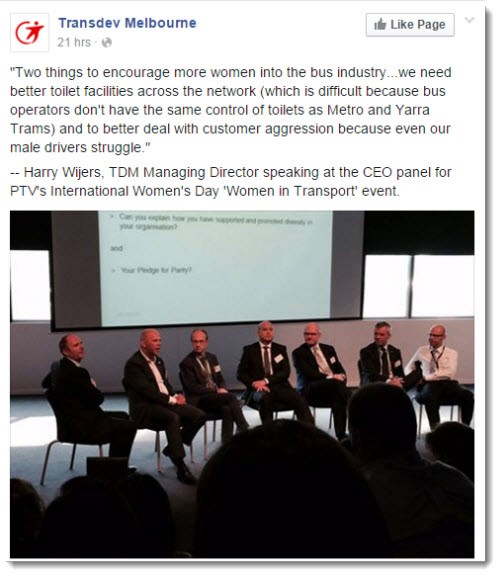 Hard to pick a winner from today’s photos Ms Tips.
Joe & Jeb looked like a sure thing, but then “On The Buses” came storming down the straight.
Too close to call.

They have a lot in common, a successful failed governor and a failed treasurer, says it all.

Joe and Jeb – what terror that strikes. The last thing we need is for Jeb is to be a fan of Australia.