Whelan up as the SMH lets go of some columnists (but not Sheehan). Judith Whelan has been appointed editor of The Sydney Morning Herald.

This makes her the second-most powerful person in the SMH newsroom, after editor-in-chief Darren Goodsir. The position of editor is “responsible for all content produced across topics,” as editorial director Sean Aylmer put it yesterday. “This is a digital job and will run the newsroom on a day-to-day basis.”

Whelan is a former editor of Good Weekend magazine, editor of the SMH Saturday edition as well as being a features editor, and a health and transport reporter. Her appointment is a bit of positive news for the SMH, which was yesterday the subject of a extraordinary 4000-word investigation by Richard Cooke into the career of Paul Sheehan that ran in The Monthly and The Guardian.

Cooke savages Sheehan’s particular article on “Louise”, that ran on the front page of the SMH over a fortnight ago. But Cooke digs much deeper, detailing how generations of editors at Fairfax had tried to rein in or, when that wasn’t possible, forgive Sheehan’s many editorial indiscretions. Cooke describes how the senior writer, despite a history of dodgy articles far longer than “Magic Water”, was, in recent years, able to run roughshod over more junior editors, who no longer had the clout to pull Sheehan into line. His very public recent failure, Cooke writes, comes as no surprise:

“On this day, at this moment, Sheehan’s aura and history culminated in an awesome failure of institutional memory. A man who had messed up so many times was given one last calamitous benefit of the doubt.”

Last Friday, Goodsir said Sheehan “will stand aside from his duties until further notice”. Many noted this wasn’t the same as saying Sheehan had been fired. But the Herald has let some of its other columnists go.

Yesterday, new ABC Sydney Mornings host Wendy Harmer said her monthly column in the Herald had been cut. She’s not the only one: the cutbacks affect columnists who got the back page of the SMH’s Saturday News in Review section. In the past four weeks that’s been Jacqueline Maley, Peter Munro, Wendy Harmer and Malcolm Knox — a mix of in-house journos and contributors. Author John Birmingham is also a contributor — though no longer.

The intention, Crikey has been told, is to put Maley — the SMH’s parliamentary sketch writer — on the column every week. It’s been described as a cost-cutting measure.

Birmingham retweeted news of the death of his SMH column with the comment: “Well they have to fund Paul’s gardening leave somehow.” Could he mean Sheehan? Living on the edge. Birmingham still writes every Tuesday for Fairfax’s Brisbane Times. — Myriam Robin

It was Chrome that did it. A correction on Wired this morning:

“Due to an oversight involving a haphazardly-installed Chrome extension during the editing process, the name Donald Trump was erroneously erased with the phrase ‘Someone with Tiny Hands’ when this story originally published.”

Sun splash prompts first royal complaint. Queen Elizabeth II has made her first-ever complaint to a press regulator, after The Sun splashed yesterday with the explosive claim that she wanted Britain to leave the EU. 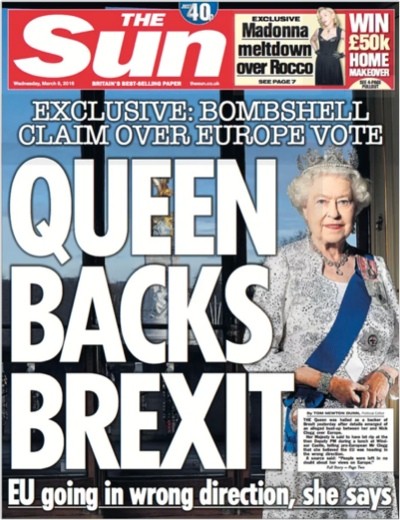 The royal family usually avoids commenting on political issues, and the suggestion that the Queen would get so involved in a live political debate appears to have raised alarms at Buckingham Palace.

The monarch’s complaint relates to the accuracy of the story. Which could be a problem for The Sun, given it’s headline goes a bit further than the text. “Queen backs Brexit” isn’t quite supported by the Queen expressing concerns about the EU in 2011 — the term “Brexit” itself didn’t really come into vogue until 2012.

The Sun‘s article claimed that the Queen had strongly criticised the EU to former deputy PM Nick Clegg back in 2011 at a lunch-time meeting. The Sun said it had “two different and impeccably placed sources” of the conversation, which has kicked off a round of guessing about the source of the story.

The two Liberal Democrats present when the alleged conversation took place are both pro-EU and seemingly with nothing to gain from the leak. The others at the meeting, Conservatives and Brexit supporters Michael Gove and Cheryl Gillan, have both sworn an oath of confidentiality as members of the Privy Council. Gove, however, attended Rupert Murdoch’s wedding last weekend — three days before the story appeared. Both Gove and Gillan declined to tell the Financial Times whether they’d told The Sun about the meeting. — Crikey intern David Parncutt

Starting a paper is harder than it looks. London media reports claim sales have stalled for New Day, the first new national paper in Britain for years. Reports in The Guardian and the Press Gazette say the new paper is selling around 110,000 copies a day instead of the targeted 200,000. And for that reason, the paper’s publisher, Trinity Mirror will leave the cover price at 25 pence instead of doubling it to 50 pence, as had been planned at the launch 10 days ago.

The i newspaper also had a slow start when it launched in 2010. But thanks to advertising and sharp attention to content from the Independent papers, sales rose to more than 200,000 a day. It has been sold to Johnston Press (for 25 million pounds) as part of the complete restructure of the independent media group. — Glenn Dyer

Windsor announces candidacy, answers everybody’s questions. What is it with independents and very long press conferences? Unlike Rob Oakeshott in 2010, Tony Windsor made a point of announcing his candidacy for New England at the start. But he didn’t stop taking questions until 10.57am (he started at 10am)The ABC cut away after half an hour. Sky stayed with the announcement until 10.55am, cutting away with only two minutes to go. Not that they could have known that.

By the way, the link to our video of the day yesterday didn’t work. Apologies, it’s here. And to answer our question, Tony Windsor did go to Africa with his son, he told Fran Kelly on RN this morning. — Myriam Robin 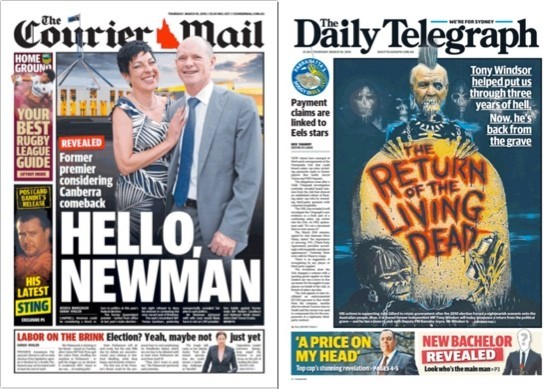 Video of the day. It’s been a sad start of the year for musicians. Australian performer Jon English has died at 66 after complications due to surgery … 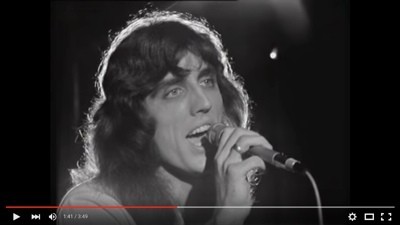 Front page of the day. The Spectator has this take on the political week … 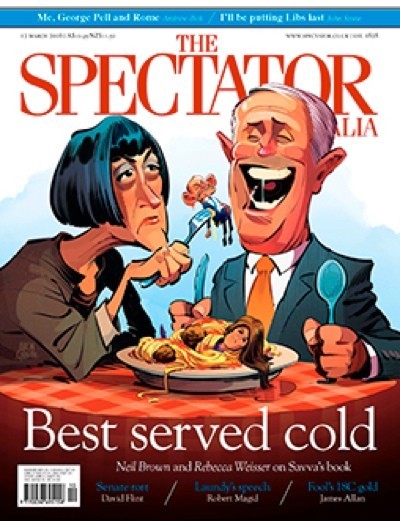 Buckingham Palace is “hacked off” again?

Why do parties recycle failures – enterprises that evolve , for instance do not re-employ failed executives.

Why do parties recycle failures – enterprises that evolve , for instance do not re-employ failed executives.

“In the past four weeks that’s been Jacqueline Maley, Peter Munro, Wendy Harmer and Malcolm Knox — a mix of in-house journos and contributors.”

I always read the back page of News Review, and look forward to it generally. Since Mike Carlton’s demise there have been a number of contributors.

Regarding their general worth, Peter Munro’s last piece a few weeks ago was just cutting satire, hilarious and so well put together, jut mocking the Turnbull government’s glorious week, as it was. Was so looking forward to more from him.

Birmingham is also a regular contributor and his humour and insight is a great read. For bursting inflated egos, these two are top of the pile and do it with style and humour.

Malcolm Know and Jacqueline Maley, both worthy journalists who I enjoy reading, are quite a comedown from them, nary a laugh to be had and less insight than the two comedian/journalists.

And then Wendy Harmer. When I flip over the backpage to see that she has written it my heart sinks. Another largely worthy, dreary, and ironically humourless article invariably follows.

It’s the back page for gawd’s sake. Be a little adventurous SMH! You have two gifted writers in Munro and Birmingham, use them. Worth all the Press Gallery in one.

Dog’s Breakfast, there are several gifted writers available, but neither Crikey nor its fellow capitalist rivals are interested in talent unless it’s subservient to their financial interests.