The battle for Bronny’s turf, and the truth about Liberal ‘factions’

A Mackellar insider gives us the lowdown on preselection politics in Bronwyn Bishop's seat.

Niki Savva’s book might be dominating the headlines at the moment, but there’s still plenty of interest in the preselection for the ultra-safe (possibly) Liberal seat of Mackellar as Bronwyn Bishop, at the age of 73, stands yet again.

Last night, the ABC’s 7.30 program led with a piece on the issue, featuring Professor David Flint and Dick Smith at his most personable. Flint used the platform to mouth off at the factions supposedly controlling the vote, while Smith charmingly warned us that if the party didn’t preselect a younger person, he would stand against Bishop, his lifelong friend, saying they both needed to be put out to pasture.

So what control do the factions have over the local preselectors? None, zip, zilch, nada. It’s a beat-up.

Mackellar, contributing the local contingent of 50% (48) of the preselection panel, is not a conference controlled, or even influenced by, any of the three factions within the NSW Liberals. Nor are adjoining conferences. These local members are independent thinkers, not followers.

So just what are these factions? Well, there are the moderates, who tend to be more your classic middle-of-the-road types (which is, after all, where the majority of Aussies are); then there’s the soft right, who are, shall we say, more authoritarian and conservative. In the current alignment, these two factions generally call the shots. The third faction is the hard or religious right. The lunar (or looney) right. These are people imbued with the spirit of god, who are on a mission to save all our souls by imposing a Christian theocracy and stopping such abominations as gay marriage. They don’t even get that their ideas are simply not electable, which is why the other two factions try to keep them quiet.

Among the Mackellar local preselectors, the vote will really be about who is the best candidate to represent their little bit of heaven-by-the-sea. Sure, there are some rusted-on Bronny supporters in the smaller branches but, being smaller, they get to send fewer preselectors. And anyway, more of Bronny’s rusted-on supporters have rusted away completely than remain alive. It’s the bigger branches where Bishop is in trouble — and they have the numbers. And those numbers are going against Bishop; 7.30 ventured she had the support of 70% of her branches. If she gets 30%, she’s doing better than the number-counters are saying. Of course, if the branches of Mackellar hadn’t atrophied over the years under Bronny, the locals would be entitled to 70% of the say, not 50%.

The other 50% of preselectors will be from the state council/state executive. State councillors — who are, as are their local fellow preselectors, elected to office in branch elections — are selected for the panel by ballot. It’s only here where factional pressures can come into play, and it is fair to say that some preselections can swing on the results of the ballot.

There was some sentiment behind the move to give Bishop one more term, largely because to blast her out would take too much effort and yield unwanted media attention. First, Liberal identity Walter Villatora had his nomination splashed across the local papers, and it was on. Then the branches revolted. Now, harder heads are looking at the balance sheet. Past secret polling shows the Liberal vote would go up substantially with another candidate. This wouldn’t matter so much in such a safe seat, but the ramifications for a Senate quota are immense. Add to that the knowledge a well-respected local, and household name, like Dick Smith — who has vowed to stand against Bronny, should she be preselected and could possibly win the seat — and you’re looking at a substantial expenditure in a seat where normally almost no money has to be spent. It’s money best spent in a marginal, not a previously blue-ribbon seat.

As Smith observed, preselections are secret ballots and hard heads tend to prevail. Factions simply cannot control the vote in such circumstances. Not with the widely held perception in both the party and the wider electorate: Bishop’s days are over.

Bronny’s most credible challenger is Jason Falinski, 7.30 reported last night. Falinski is a dinky-di local with a good background both within the party and in business in his own right as managing director of a firm he founded in a field completely apart from politics. This is probably accurate, but exhaustive ballots can produce strange flows of votes as candidates bow out and their committed votes go elsewhere. What is actually the most important factor of all is often candidates’ performances on the day. It is true candidates can go into a preselection as the anointed one yet lose because they were beaten by someone more formidable. This happened recently in a neighbouring state electorate when barrister Alister Henskens beat both the soft right- and moderate-sponsored candidates. Cream tends to rise to the surface.

Weighing it all up, I’d put my money on Falinski to be the Liberal candidate for the federal seat of Mackellar in the election of 2016. 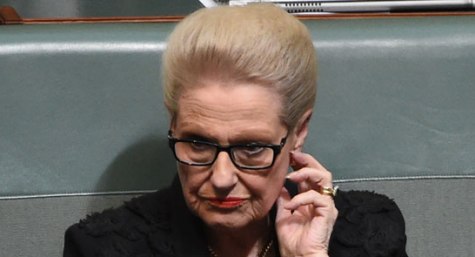