Tony roars back into the media mentions -- much to Turnbull's chagrin.

While the top four stayed in the same order, the change in relative difference was huge, with former PM Tony Abbott coming close to knocking off current PM Malcolm Turnbull, after massive amounts of publicity following the release of Niki Savva’s book, plus Abbott’s own continuing comments on defence and economic issues. Some online wags morphed a picture of Kevin Rudd into Abbott, but in fact Abbott has received far more media coverage in his first six months out of the job, most of it generated by his own comments, than Rudd did.

Meanwhile Attorney-General George Brandis jumped up the list after his comments on timing of the same sex marriage plebiscite added to the growing wave of speculation about a 2 July double dissolution election, added to by claims the Budget might be brought forward a week.

Education Minister Simon Birmingham jumped up the list after announcing a review into the Safe Schools program supporting LGBTI children that has been labelled as social engineering and radical by some Government backbenchers (including the previously mentioned Member for Warringah), increasing the criticism of PM Malcolm Turnbull from LGBTI groups that he is still ruled by the more conservative parts of his party. 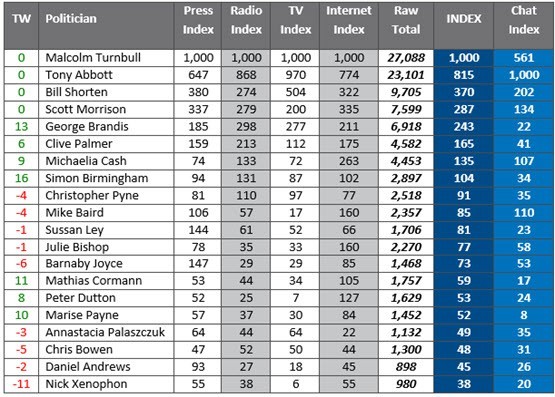 It’s Abbott by a mile on social media. Not quite back to the heady 100,000 plus days, but maintaining the same overall unfavourability from all those electronic graffitists.

It was also Abbott by several miles on talkback, but a far friendlier reception: although some did deign to suggest he could shut up a bit, while others raged against the repeated anonymous claims of an affair with former Chief of Staff Peta Credlin.

Tennis player Maria Sharapova got out ahead of this one and announced her failed drug test herself, after the drug she had been taking for 10 years was added to the banned list just before the Australian Open. That didn’t stop a whirlwind of media coverage, but in my humble opinion, it’s not exactly Lance Armstrong, is it?