It’s the vibe. As Liberal Party director Tony Nutt said recently, for now only God and Malcolm Turnbull know when the election will be held, but Ms Tips gets the impression from those in the know on both sides that both the government and Labor are now preparing for a July 2 election to be called after the budget in May. Expect major policy announcements in the next few weeks from both camps and the legislation the government wants passed before the election in the three-day sitting week later this month. Look at all the reviews to government that will conveniently arrive before the budget.

Attorney-General’s George Brandis’ comment that a plebiscite would be held this year (although Turnbull quickly backtracked) also seems to indicate the government’s thinking on an early election.

As for the double dissolution trigger? Technically the government can argue that by the Senate referring the Australian Building and Construction Commissioner bill to committee, the bill has failed to pass. That is still, of course, open to a challenge from angry crossbench senators in the High Court.

This guessing game is a favourite of journalists in an election year, and it fills many column inches — but everything seems to be falling into place.

Progressives in formation? In what is not an uncommon occurrence, one of Australia’s many micro-parties seems to be disintegrating under the pressure from personality politics. In an email to members of the Australian Progressives last week, one member published a motion of no confidence in the current team running the party, saying that the party still had no candidates for the upcoming election and had failed to run at the North Sydney and Canning byelections. 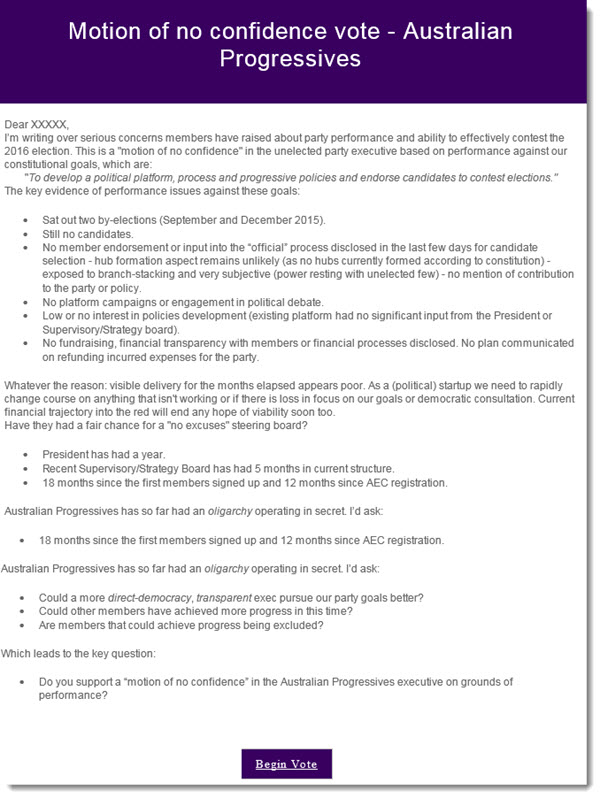 It also included a link to an online vote for the no confidence motion but did not state who had sent the missive. Just over an hour later another email was sent from the secretary of the party, telling members to ignore the email, and identifying its sender. According to the email from secretary Laura Lawrence, the sender did not have authorisation to send the email to members:

“[The sender] is no longer member of the party and has no authority to access member account information. He was expelled recently for seizing control of party assets without approval from the executive.” 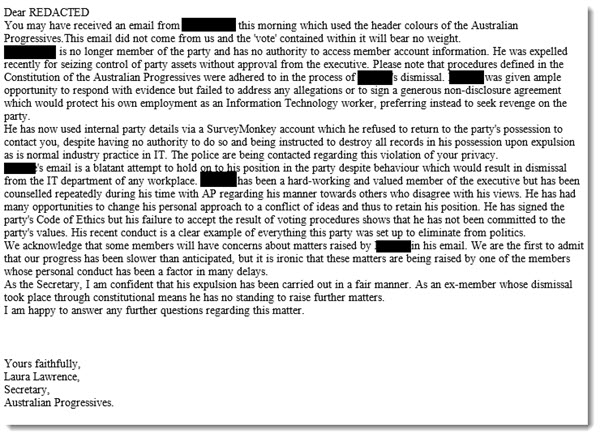 The Australian Progressives spokesperson Aaron Lee told Crikey this morning that in the days since the security breach the party had engaged an IT expert to help with better data management. He said the party was still in the process of selecting candidates for the federal election.

Stop telephonin’ me. Our culturati spy hadn’t seen anything like it in years of theatre-going: a mobile phone that stopped the show. In last night’s performance of Lungs, a Melbourne Theatre Company two-hander at the Arts Centre, a phone buried in a purse in the front row just wouldn’t stop ringing. “Why don’t we just stop and wait for you to turn it off,” patient pro Bert Labonte suddenly said in the middle of a sensitive, sexually charged scene, to gasps from the audience. As Labonte glared at the woman (he later said on Twitter he felt sorry for her), nobody in the front row could manage to shut the thing off. An usher eventually emerged to evict the device from the theatre. Labonte and fellow cast member Kate Atkinson composed themselves, rewound the scene and got back into stride.

Who run the world? Today is International Women’s Day, a day to celebrate women and assess how much further we have to go on the path to true gender equality. While male respondents to today’s Essential think this equality caper has gone far enough, we aren’t so sure. This video is an oldie but a goodie: 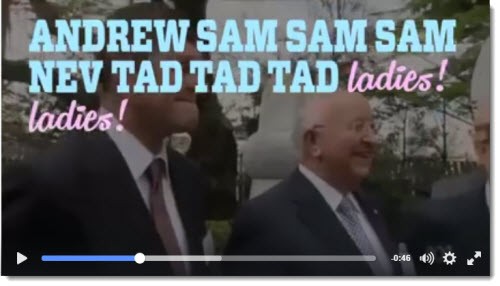 Also on the topic of gender equality, the Bureau of Meteorology is marking International Women’s Day with a “cool change” according a press release yesterday. Unfortunately for most of the country today, the change has nothing to do with the temperature:

“A really ‘cool change’ is sweeping through the Bureau of Meteorology, with almost 50 percent of graduate meteorologists now women, compared to just 21 percent in the late 1980s and 90s.

In the past three years, 24 women out of 49 students have successfully completed the nationally accredited Graduate Diploma in Meteorology, held at the Bureau’s Melbourne Training Centre.

Over the past 16 years, 94 women have graduated with the Diploma (34 percent of the students).

Back to the future at Fairfax. In an interesting mix of the old and new worlds, today’s Age has published a letter to the editor about an article that features in the same edition of the paper. Of course the letter writer doesn’t have the ability to see into the future, but was reacting to the piece as she read it on the website yesterday. Digital first! 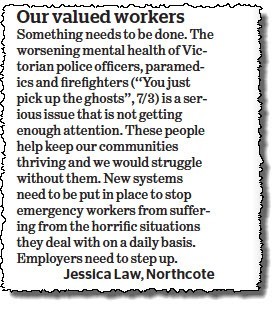 F35 is no angel. As fans of the Great Boondoggle In The Sky, the F-35, naturally we didn’t miss the ABC’s Background Briefing demolition of the Flying Heap of Crap. But meanwhile — you’ll never guess — more problems have emerged. The director of the USAF’s F-35 integration office has admitted the plane has a major software bug that stops its radar working while flying (presumably it’s fine while on the ground) that Lockheed is currently working furiously on — using software engineers pulled from working on the hundreds of other more minor software bugs. All should be ready by March, apparently — though, displaying a canny awareness of the history of the plane, the official didn’t specify which year.

WaPo goes Pell. While last week’s appearance by Cardinal George Pell at the Royal Commission into Institutional Responses to Child Sexual Abuse dominated the media in Australia and was also well covered in Italy, it’s interesting to see that his testimony made it to an editorial in The Washington Post, posted to Facebook by the ABC’s Zoe Daniel: 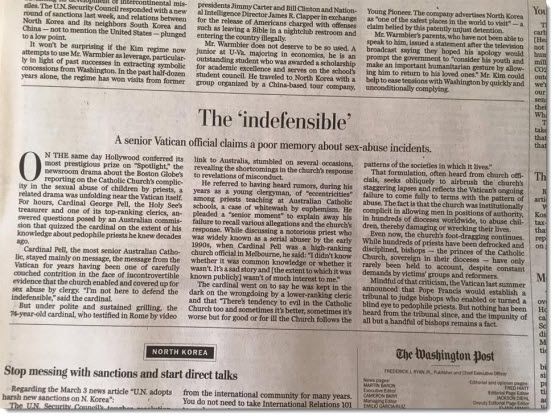 Twitter diplomacy. Last week we reported that Russian author Masha Gessen had tweeted and spoken about her experience entering Australia, when she was rudely confronted over dirt on her folding bike. The Australian Border Force Commissioner Roman Quaedvlieg replied to her tweet promising to investigate the incident. He replied on Friday night saying that her experience was not with an ABF officer, but with someone from a different department:

It’s not an on water matter, so he can tell us that much.

For someone claiming to be a journalist, Gessen shows not just a self entitled preciousness but astonishing lack of observation if she can’t tell ABF from AQIS – the former uniform is SS black, the latter couldn’t be less sinister.

If no-one could find the phone, perhaps it was because it was in a handbag, not a purse – it wouldn’t fit.
Why import an ambiguous American term when there’s a perfectly good word already in use? It’s as bad as “bathroom”.