Meet your new Victorian senator ... back of the parade ... Abbott's replacement? ...

New blood. The Victorian Liberal Party has preselected IPA staffer James Paterson for the top spot in the Victorian Senate ticket — and Paterson indicated this morning he would be taking over the vacant seat left by retiring Senator Michael Ronaldson before the election is held. Paterson, who is 28, won 210 to 188, claiming victory over Michael Kroger-backed superannuation policy adviser Jane Hume. It was somewhat surprising, although one Liberal source reminded Crikey that powerbroker Kroger doesn’t control the whole party. We’re told Paterson is personable and popular and a large contingent of friends in the party are looking out for him. This morning on the ABC with Jon Faine, Paterson named repealing section 18C of the Racial Discrimination Act as one of the major areas of policy that he was passionate about — unsurprising for a member of the IPA. Paterson’s age and CV are areas in which he has been criticised — his short career so far has included being a staffer to Communications Minister Mitch Fifield, the Victorian Employers’ Chmaber of Commerce and Industry and rising through the ranks of the IPA. When asked by Faine if he had ever had a job outside politics, Paterson quickly said “yes, my first job was at a $2 shop, and my second job was at Myer”. We wonder if he sold unicorns.

Back of the parade. Members of the No Pride In Detention float at Sydney’s Mardi Gras on Saturday night claim that they were pushed back in the order of the parade after protests from the group set to march in front of them — Rainbow Labor. According to social media posts, the group, which aims to bring attention to LGBTI refugees in detention camps, was told at the last minute they would have to wait and start at a later position. Crikey has contacted the Mardi Gras organisers to ask why the order was changed, but we didn’t hear back by deadline.

Mike Baird for Warringah? The Daily Telegraph reported last week that Mike Baird could be leaving NSW politics sooner rather than later. A tipster tells us that he could be headed to bigger and better things, particularly if Tony Abbott sees fit to resign in the wake of Niki Savva’s explosive new book:

“Who would be Abbott’s likely successor in the seat of Warringah should he resign, causing a by-election? Liberal sources say a likely candidate could be Mike Baird, the NSW premier.  Mike’s father, Bruce, was a NSW government minister who quit to join the bigger game in Canberra, so it may be a case of ‘like father, like son’. At present the expectation is for Mike to lead the Coalition to an unprecedented third term, but should the federal seat of Warringah become vacant the call to Canberra could well be too much for him to resist. Baird’s state electorate of Manly has the same footprint as the federal seat of Warringah, so Baird would be a shoo-in. With Baird’s popularity he would then be looked on as a potential heir to Malcolm Turnbull when he retires in a party that lacks an apparent replacement. A move such as this would also help consolidate the moderates’ increasing stranglehold on the party.”

Murdoch ties the knot. Rupert Murdoch and Jerry Hall tied the knot over the weekend after a whirlwind romance. The 84-year-old media mogul has used his nuptial bliss as a reason to give up on Twitter (perhaps temporarily), which fills us with both joy and disappointment:

But some are more thankful that Murdoch’s stream of conciousness will no longer be showing up in our feeds:

Gossip columnists were given plenty of material to work with, as the guest list included all of Murdoch’s and Hall’s children from previous marriages, but the dress code wasn’t always forgiving: 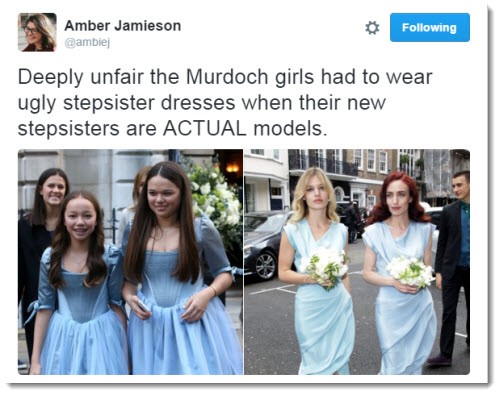 Return of John Howard? Malcolm Turnbull must be hoping that former Liberal prime ministers would just pipe down with their opinions on what his government is doing, with Tony Abbott and John Howard doing their best to give more than their two cents. But one tipster thinks it’s not just Abbott who is trying to signal that he’s up for a bigger job in Canberra:

“Heard on the reliable Canberra grape-vine that the reason we are seeing and hearing so very very much of Howard at the moment is he is showing the Libs he is ready, willing and able to be drafted to save the party. An opinion endorsed by Brian Loughnane.”

We’ll believe it when we see it.

Please give generously. A tipster spotted this pic at the Dick Smith store in Greensborough yesterday — because so many of the retailer’s staff are casuals, they have no redundancy entitlements: 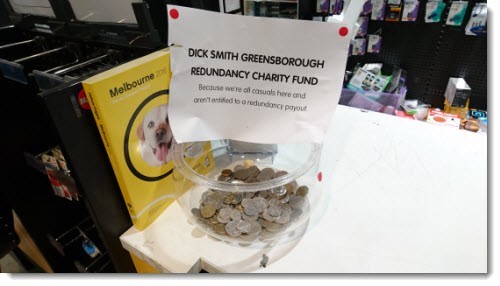 Your reported 210 to 188 vote is almost as small as the 2-0 vote which gave Deborah O’Neill a safe Senate seat.

Great to see Rupert and Jerry tie the knot, hopefully he gets totally besotted and forgets his revenge agenda on the world. I understand his best man was Lucifer and the groomsmen were Beelzebub, El Diablo and Satan. Very impressively!