Niki Savva's book sets off a firestorm. And other media tidbits of the day.

No right to a response. Niki Savva’s Road to Ruin, out today, is full of new allegations about the relationship between ex-PM Tony Abbott and his chief of staff Peta Credlin. Mind you, they told the Sunday Telegraph that Savva never approached them for a chance to respond.

“After 16 years in politics, I’ve always made it my practice not to comment on gossip or stories from unnamed sources,’’ Credlin told the Tele’s Sam Maiden. “Sadly, modern politics is full of both. So I’m hardly going to change this practice especially when the so-called journalist didn’t make any effort to contact me. This book says a lot more about her lack of ethics than it will ever say about me.”

Since then, multiple media outlets have grilled Savva over the comments. Speaking on Insiders on Sunday, Savva said:

“What I decided was that Tony Abbott and Peta Credlin any day, any night, can get out there and give their version of events, and their version of events often differs very widely from everybody else’s … There are people who had been abused for years during that administration, who suffered in silence, and I thought they should be given the chance to tell their story.

“And that’s what I tried to do and they have very bravely gone on the record, so many of them, to explain what happened.”

And on RN Breakfast this morning she said:

“The other point I will make is, I learned from bitter experience over a number of years, as did many of Abbott’s colleagues, that many versions of events that he put forward just could not be trusted …

“Whatever I wrote, whatever I said, there was going to be criticism from both of them … They’ve sought to have me sacked … So I don’t apologise for not going to them to get their version. They can put it out there any day any time.”

For what it’s worth, Oz stablemate Peter van Onselen has written that he thinks Savva was right not to bother with comments, after his attempt to do so for his book resulted in Abbott savaging him for saying he had “engaged” with the authors when all he had done was provide off-the-record comment. PVO writes that he has asked Abbott to allow him to release the email exchange; Abbott has declined. — Myriam Robin

Savva’s inspiration. There’d be little comfort for Abbott in the acknowledgements to Savva’s book, where she says she was only inspired to write it after he shirt-fronted her about her writing at the Oz‘s 50th birthday party in July 2014.

“I certainly never thought I would write a book about Tony Abbott’s brief prime-ministership,” she writes. “[W]hen he got there, I thought his career would outlast mine. Ten months into his tenure, after he tackled me at The Australian‘s dinner, I got fired up.”

The altercation is detailed in the prologue of Road to Ruin. Savva wrote Abbott wasn’t seated far from her at the star-studded dinner, and cheerily greeted her, which in itself raised her suspicions, given at previous meetings, he had studiously ignored her. But at the Oz dinner, she writes, he needed only a handshake to ask her, “Now, Niki, can you stop criticising my chief of staff”. Sometimes, he told her, ministers said things that weren’t true. She responded sometimes they said things that were.

“[H]ubris never goes unpunished. Thanks to a prime minister acting like a raging bull and full of it, my days as a columnist could have ended early, if not for the support of the paper’s then editor-in-chief, Chris Mitchell, who endured regular expletive-laden complaints about my contributions from the prime minister.

“The night provided me with two important insights. The first was that Abbott took more offence of criticism of Credlin than himself; the second, that he took her word above that of his colleagues. They lied; she told the truth”.

The old state suite … accommodated hundreds of people at the annual event, with business people, public servants, politicians from both sides of politics, and community leaders all getting on the sauce together at the taxpayers’ expense.

Back in 2011, then-treasurer Jack Snelling first started slashing away at the largesse, halving the state suite’s capacity from a staggering 800 to 400, and ending the lavish state dinner that used to be held in conjunction with the event.

Sunday used to be the big day for the state’s media, with journalists even able to bring along a “plus one” to the swim-through.

The state government’s corporate box now has a capacity of only about 50, and InDaily understands that just 10 of the tickets over the four-day event have gone to the media, chosen, at least in part, via the “squeaky wheel” principle. — David Washington in InDaily

More pain. The gathering gloom over London’s once-vibrant newspaper sector continues to spread, despite the brief bright light of the marriage of Rupert Murdoch and Jerry Hall late last week. More and more jobs are under threat (including at Murdoch’s own News UK operations): two papers are closing; dozens of jobs have been cut from regional and local papers; and even the first new paper in years can’t hide the fact that some significant decisions are about to be made.

The latest is confirmation about an impending cost-cutting move at the Murdoch clan’s UK newspapers, which have emerged with plans to cut more than 100 jobs — mostly commercial — at the various papers. News Corp’s attack on costs in London comes less than a year after 55 editorial jobs and an unknown number of commercial employees were made redundant at News Corp Australia in a cost-cutting exercise designed to lower fixed running costs by 5%. The latest round of cost-cutting comes after 2015’s sharp slide in print advertising volumes.

The Guardian is also looking at cutting costs via redundancies — up to a reported 100 or more journalists, plus associated staff. The aim is to cut costs by 20% over the next two years to eliminate the almost US$200-million-pound loss in 2015, which threatens to consume the paper’s cash reserves.

Trinity Mirror, which last week launched New Day, the first new Monday-to-Friday paper in the UK for several years (after i, which has been bought by Johnston Press and is the template for New Day), already sliced into costs in 2015, getting rid of journalists and others, combining business units and trying to offset the impact of the revenue slide at its main titles, The Mirror (including Sunday Mirror) and People.

And the owners of The Telegraph and Sunday Telegraph, the mega rich Barclay twins, have ordered a review of the papers with the view to determining whether they should be retained, sold or, if retained, restructured to lower costs. That would certainly mean job losses. — Glenn Dyer

Front page of the day. Was it a pill? Was it a mint? An aspirin? The “pill-like object” Thorpie didn’t want is good enough for the Tele‘s front page … 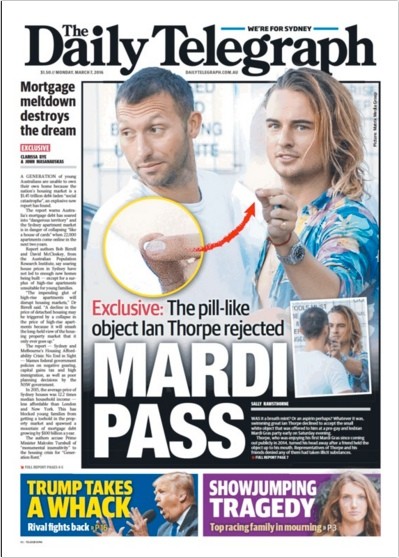 If you’re writing a book but refuse to interview the two people about the only interesting rumour you’ve raised, a fair assumption is that you knew leaving it dangling is a far better sales gimmick than covering it in a serious manner.

Someone should tell the “Terror” that Gras is not pronouced “Grass”.

Why would Savva have bothered to ask either of the protagonists?
They’d either lie, abuse or refuse to answer – as the Credlin quote shows.

AR, within the normal use of the English Language the quote does NOT say what you wish to believe. In any case IF they did decide, as you suggest, to “lie, abuse or refuse to answer”, Sabba would not only have been doing what serious investigative journalists do but also could have obtained useful material.