Fact-finding missions. Far be it from Crikey, or any media outlet, to offer any advice to the AFP about tracking down a leak. But a well-informed tipster suggests one approach that we understand has been used successfully before and requires no one to trawl through anyone’s metadata. Statuary declarations are legally binding documents. Knowingly providing false information or causing false information to be placed on a stat dec is a criminal offence and could result in a possible four-year prison sentence. If a member of Parliament does that, he or she forfeits the right to hold the office of MP. So what if Malcolm Turnbull asked all current and former members of the National Security Committee and their staff to sign a stat dec stating that they did not provide or cause to be provided any information on the current defence white paper to a media outlet? Might be interesting to see who declines to do so …

Privacy body asks for answers. Earlier this year we reported that the Australian Bureau of Statistics had some interesting plans for the data it will collect in this year’s census — that is, the bureau is going to store people’s names and addresses, despite advice warning against doing so a decade ago. Now the Australian Privacy Foundation has written to the ABS saying that it was not consulted over the decision, despite being consulted when similar moves were considered in 2006.

“Despite APF’s prior involvement with ABS, we were not aware of the consultation process the report refers to, and were not notified of the process, Media Release or Report,” it says.

The letter to Australian Statistician David Kalisch also says that the APF is not aware of any NGOs, human rights or civil society organisations who were consulted or notified about the process. The letter calls the consultation process flawed and asks that the ABS release details about which stakeholders were notified of the privacy impact assessment process, and why it was conducted in-house instead of by an independent organisation.

“Concerns are also heightened because Australians remain exposed, without effective protection if anything goes wrong: there are still no laws in place for mandatory data breach notification, no requirement for subject-accessible auditing or mandatory tracing of downstream re-use or abuse of re-identified data, nor any enforceable legal right against serious invasions of privacy; and the regulator, the Privacy Commissioner, is now short-term, part-time, over-loaded and under sustained institutional attack.”

The letter was sent by the APF in February. We contacted them to ask if they had heard back from the ABS, but did not receive a response by deadline.

Clinton and ladders of opportunity. As Hillary Clinton moves closer towards securing the Democratic nomination for president, a tipster felt a sense of deja vu while reading her victory speech after Super Tuesday. On the front page of the Australian Financial Review, Clinton is quoted as saying:

“Instead of building walls, we’re going to break down barriers and build ladders of opportunity and empowerment so every American can live up to his and her potential.” 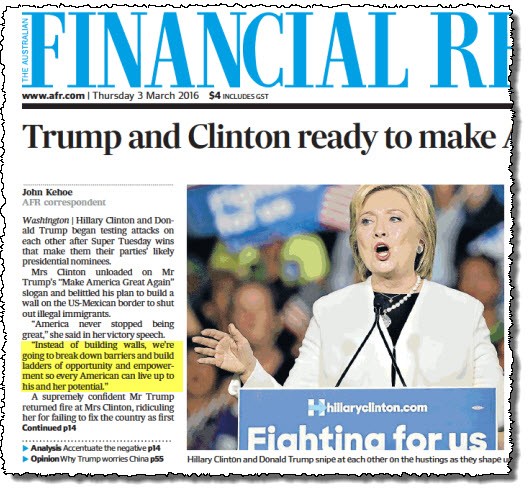 Ladder of opportunity? We’ve heard that one before, from none other than former Labor leader Mark Latham. This is most likely just a coincidence, but if someone from Clinton’s team is taking notes from Australian politics, they might want to look for inspiration in someone other than Latham.

Border Force goes hard. Since its inception, the quasi-militaristic Australian Border Force has been increasingly hardline. Now the level of aggression has even shocked Russian author and journalist Masha Gessen, who was sacked from her job after she refused to report on Vladimir Putin hang-gliding. When she arrived in Australia, Gessen tweeted:

Gessen explained what happened to The Weekly’s Charlie Pickering on Wednesday night:

“It was strange. This guy who was checking my luggage, I travel with a folding bike and I pack it with my clothes. It is clean. He saw there was dirt on the inside of my mud flap of my bike. He had a humiliation routine going. He made me read my landing card out aloud line by line. Not until I admitted that I was wrong to not declare my bicycle as a soiled thing, a thing with soil on it, he wouldn’t let me go. It was a very bizarre experience. It was clearly not the first time he had done this.”

They didn’t manage to stop people on the street and demand their papers, but the ABF got compared to Russian police anyway. What a win.

Parliament for smarties. How do you make fun of your political rivals without bringing props onto the floor of the House of Reps? Labor’s Andrew Leigh has the answer: 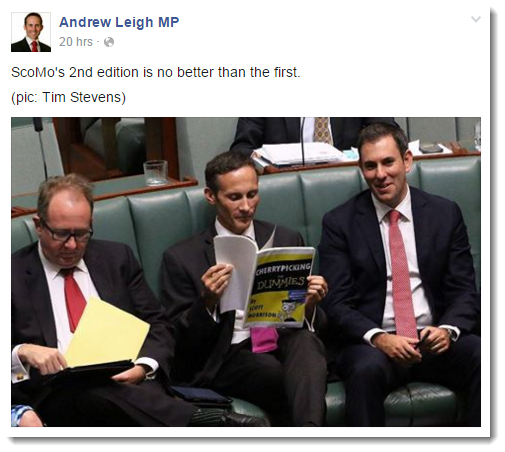 Trump’s ancestors desert him. German news outlet Deutsche Welle visited the small town of Kallstadt in the Rhineland-Palatinate region — the ancestral home of Donald Trump — to find out what the locals thought of the man who is looking increasingly likely to be the Republican candidate for US president. But no one wanted to talk:

“After dozens of calls, our first impression seems to be repeatedly confirmed: The Trumps in the Palatinate region of Germany are fed up with their distant relative in the US. No one seems to be happy to comment. Everyone wants to remain anonymous.”

It might be that the customs officer went over the top, but Masha Gessen definitely went over the top in complaining. The customs declaration card is a legal document and she signed it. It’s better to over declare if in doubt. It’s clear that sporting items contaminated with dirt have to be declared (in addition to declaring visits to rural areas and farms, or contact with farm animals).

I declare hiking boots for the same reason (once I was picked up in New Zealand when customs discovered a pair in my luggage on X-Ray, ones I had only used in the city)

I think she was complaining about being made to read out her whole landing/customs declaration in a humiliating way. If the customs officer noticed the dirt, advised her politely it needed to be removed and that she should declare this next time, I don’t think she would have minded.

On my first trip to NZ for many years, NZ quarantine staff took away my walking boots and dunked them in disinfectant but it was done with humour and politeness and the next time I went to NZ (and on return to Australia) I made sure my boots were clean.

I’m not sure the shift to Border Force has anything to do with customs acting that way, sounds remarkably similar to a re-entry to Australia I had once in 2011. I was concerned I had failed to fill my card properly (returning from first work trip, couldn’t sleep on flight and forgot to declare work items) so I raised the issue with the customs officer and then got aggressively yelled at and called an idiot and a moron, and same questions yelled at me again and again despite answering them, whilst everyone else in the lines stared at me. If it didn’t include swearing it sure felt like it. Eventually got waved off, called an idiot again, and told to get lost without helping me fix my card or directing me to where I needed to go to for inspection. (Found another office in luggage collection who ignored my comments about behaviour of their co-worker and quickly helped me fix card and get to right area).
Reminded me a lot of a grouchy old bus driver we had at school who wouldn’t let kids on bus if they forgot their pass, even if they got on at same stop everyday. Petty people with a small amount of power in a situation who know they can’t be challenged.

When Crikey Land deems the minor problems of hopeless International Travelers an issue, there’s little need to seek further evidence of its decline as a serious media outlet.

Precious petal Gessen – “It is clean. He saw there was dirt on the inside of my mud flap of my bike. “. End of discussion.
She was asked to read the card and asked why she hadn’t complied.
Considering where she’d been, the list of diseases potentially present in that “dirt” start with foot & mouth then gets serious.
As much as I hate to admit it Barnarby Rudge was right about those dogs which could have added rabies.