Fairfax has finally pulled the plug on BRW, absorbing the title into a new "editorial and commercial offering".

BRW will be formally absorbed into The Australian Financial Review, the paper announced this morning, putting an effective end to the existence of one of Australia’s most storied media brands as a standalone title. BRW has been absorbed into what Fairfax is calling its new “leadership category”, an “editorial and commercial offering” that will span the Fin, print and events. From March 17, brw.com.au will redirect to afr.com/leadership/entrepreneur, where, as Fairfax puts it, “the BRW conversation will continue with even richer content”.

BRW was started by Robert Gottliebsen in 1981. It pioneered the concept of “business news you can use” in Australia, while also drawing wide acclaim for its rigorous coverage of Australia’s wealthy, which culminated in its Rich Lists.

The magazine’s circulation flatlined in the early 2010s, and it was axed as a print product in late 2013. At this point it lost most of its staff, who were moved onto other parts of Fairfax or took redundancies. Fairfax maintained it was still a standalone online publication.

But since then, BRW has been accorded fewer and fewer resources, leaving Fairfax staffers increasingly uncertain about its future. As Crikey recently reported, BRW has been living a lonely existence since last last year. It had just one paid staffer — editor Michael Bailey — and when he went on holiday over Christmas, not a single piece was published on the site for six weeks. When we cast our eyes over the website this morning, it appears nothing new has appeared since February 23. Meanwhile the BRW Facebook page has led to small business and entrepreneurial content in the Financial Review since December.

Today’s announcement resolves BRW‘s odd existence. According to page 3 of today’s Fin, Bailey will now become the “entrepreneur editor” of Fairfax’s new “Leadership” section. The new section is being edited by Joanne Gray, who’ll do that as well as her current role of Boss editor (Boss will still appear once a month in the Fin, and be supplemented by new “leadership” sections in the paper). Other names Fairfax used to spruik the new section include Boss‘ Patrick Durkin, Theo Chapman, and Rachel Nickless, as well as Fin education editor Tim Dodd, Fin workplace editor Ewin Hannan, accounting editor Agnes King and BRW Rich List editor John Stensholt, who as well as covering the business of sport for the paper last year edited and wrote the BRW Rich List from within the Fin. 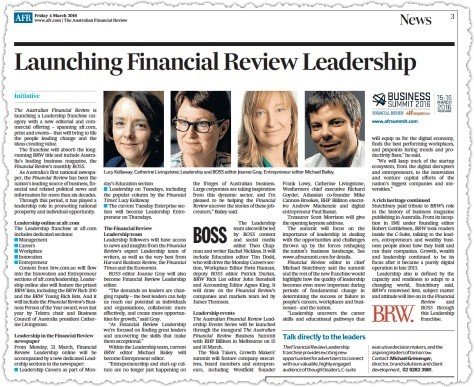 While it won’t continue as a standalone title, BRW’s name will live on through the Rich Lists. The Rich 200 and the Young Rich, housed within the new section, will still be viewable without a subscription.

Today’s announcement formalises an absorption of BRW into the Fin, but the two products haven’t had exactly the same audiences. As a digital product, BRW was free. While it carried a lot of Fin content, it also targeted itself at entrepreneurs and small businesspeople often not covered as extensively in the Financial Review. It’s not clear how much of this audience will want to migrate over to the more corporate Fin, which also has a paywall. A notice to readers on BRW this morning carried at the top of every article says they can read “the same great content” by “signing up to a one month free trial subscription to AFR.com”.

Fairfax appears keen to monetise the new section with an events division — its announcement this morning makes note of two such events already planned. It will be closely watched at News Corp, where The Australian is making a serious bid to secure business readers away from the Fin. News Corp sources say it has been moderately successful.

What would Crikey do without important social issues such as Rich Lists?