Andrew Bolt will interview George Pell on Sky News tonight. Plus other media tidbits of the day.

Sky had said relatively little about the interview publicly, saying it couldn’t confirm or deny the interview would happen, despite rumours of its existence since Tuesday. Perhaps Pell was waiting to see the outcome of his four days of hearings before agreeing. The interview will air at 7pm tonight on Sky, and globally on the Australia Channel.

DeciderTV asked Sky News CEO Angelos Fragopoulos this week if the channel had paid Pell for the interview. He said it hadn’t, and that the suggestion of it was “quite bizarre”.

Bolt has been one of Pell’s greatest defenders in the media, but he turned on the Cardinal earlier this week, saying his testimony had been “a disaster” and a “shocker”. Then, in a heartfelt post mere hours later, Bolt referenced a poem he wrote at 13 about racial bullying, said he’d spent his whole life trying to avoid the mob, and was devastated to see that for a brief moment, he had joined them. He said he owed Pell an apology. Which makes one wonder which Bolt will turn up to the live interview tonight. — Myriam Robin

ABC v Bridget McKenzie. Earlier this week, Crikey covered some of the submissions to Nats Senator Bridget McKenzie’s inquiry into ABC regional broadcasting. The ABC’s submission was released this morning, and it’s rather combative.

As well as echoing the broad sentiments others have expressed (that the government cannot both cut the ABC’s funding and expect it to do more in regional Australia), the ABC’s submission goes further in taking what seems to be a swipe at McKenzie herself, who lives in Elwood, a suburb in Melbourne. Her bill would require that the ABC appoint two directors who are based in regional Australia. On that note, the ABC responds:

“The ABC also disputes the notion that city-residing board members lack the ability to represent regional citizens in their respective states. This is as illogical as arguing that Senators must reside outside capital cities if they are to properly represent regional constituents.”

Speaking to Crikey this afternoon, Senator McKenzie said it was “a great pity that [managing director Mark] Scott chose to get personal rather than deal with the very real decrease in service provision to rural and regional Australia over time”.

The bill would compromise the ABC’s independence and would be expensive, the broadcaster argues. It says it already spends a third of its budget on regional Australia (most if it in transmission fees), and it is not, and has never been, a “market failure” broadcaster:

“The proposed amendments appear founded on a misconception of the ABC’s Charter responsibilities and a misunderstanding of the Corporation’s current services and commitment to rural and regional Australia. The Bill would also result in a duplication of certain support services and would bring significant financial impost on the Corporation. Moreover, while the ABC Act was drafted inter alia to ensure that the Corporation’s independence and ensure it remains free from political interference, the Bill would serve to significantly reduce the independence of the ABC and its Board.”

“Sleep is a growing subject that lacks a true editorial authority,” said Lindsay Kaplan, Casper’s comms VP, to the Wall Street Journal. The new publication aims to “own the conversation around sleep”. — Myriam Robin

AWW shakeup continues. Another of the Australian Women’s Weekly’s top journalists have jumped ship. Caroline Overington, the AWW’s associate editor, is rejoining The Australian, which she left in 2013, the paper reported this morning.

Last month Bryce Corbett, the AWW’s executive editor, was poached by the Financial Review to replace Will Glasgow on the Rear Window column (Glasgow is off to the Oz). And editor-in-chief Helen McCabe stepped down earlier this year. — Myriam Robin

Video of the day. Bad lip reading does it again. 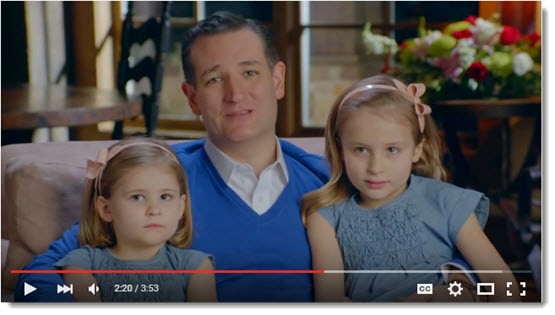 Front page of the day. Feeling a bit Ruddy … 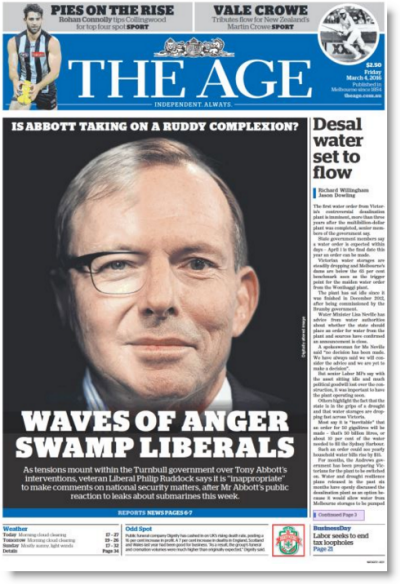 So that’s what ‘the Age’ looks like… I subscribe to the Digital Edition of ‘the Age’ and it hasn’t been available since last Sunday, the iPad App insisting that my subscription has expired (it hasn’t). Three emails and a telephone call haven’t resolved the issue (it’s apparently a general problem) – nor given any indication of the nature of the problem. A very bad look….

Let’s hope Andrew Bolt conducts a meaningful interview and it’s run on this site, because if that occurs it could be the first that most Crikey subscribers ever see.

In the interview Pell refers to the leak of information that he is being investigated following allegations of child abuse, then corrects himself to refer to “misinformation”.

Thus the cat is out of the bag and we now have a good idea how Ballarat was the Mecca for pedophile priests and brothers.

Peter Darco, unfortunately you missed the meaning of what was said, but as a Crikey Camp Follower that’s understandable. I was in Ballarat at that time and at least the cases which intrigue you are being discussed unlike, for example, cases such as one involving a non-religious academic. Despite my efforts to have it investigated it was never followed through.
I’ve mentioned this and worse cases which occurred in State School systems previously, but that’s not the type of crusade which interests the Crikey Commissariat or its devotees.