Please pass the knife. It was no Red Wedding, but the tension that bubbled barely under the surface at the 20th anniversary of the Howard government reunion dinner last night added an extra layer of intrigue. Following a day in which a leak designed to damage Prime Minister Malcolm Turnbull made its way to a columnist well known to be friends with former prime minister Tony Abbott (but he definitely wasn’t the leaker, nosiree), we wonder if the good old days were looked upon with more nostalgia than usual. Abbott and Turnbull sat at the same table, with this video showing that, while they don’t have a patch on Julie Bishop’s death stares, they are learning: 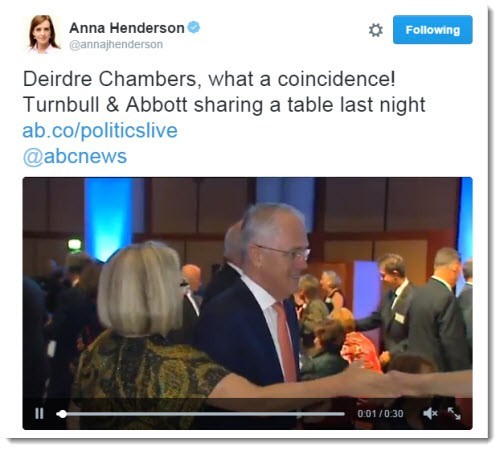 Turnbull had a much warmer moment with former treasurer Peter Costello, with both referring to the other as “darling”: 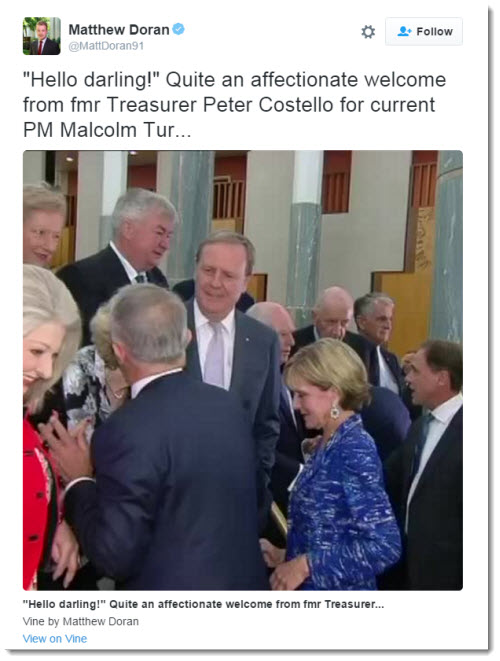 McKell difficulties? We hear all is not well at Labor think tank the McKell Institute, run by the ambitious Sam Crosby. A tipster tells us that the Australian Workers’ Union, a foundation sponsor of the institute, has pulled funding from the organisation, even though AWU national secretary Scott McDine is on the board, prompting concern at the institute that in difficult financial times, other unions may follow their example. But the AWU says it hasn’t pulled funding — yet. “The AWU National Office’s financial membership will elapse in November and renewal will be considered,” McDine told Crikey. “The AWU remains a strong supporter of the McKell Institute’s important work, and I am continuing in my role as director.”

Holding out for a hero. Since the introduction of the Male Champions of Change program in 2010, more than 30 heads of businesses and government agencies have signed up to the program, which is designed to “accelerate the advancement of women in leadership”. Just three have pulled out of the program — and all were heads of government departments. As reported by The Mandarin, the three organisations were the Department of Prime Minister and Cabinet (which is re-joining under new secretary Martin Parkinson), Treasury, and the Australian Public Service Commission. The way the MCC works is that the head of a department joins the program, and when he leaves his senior post, it is up to the new top dog to join again (the program is only open to men). When Dr Ian Watt left PM&C in 2014, his replacement, Michael Thawley, did not become a Male Champion of Change. When Parkinson left Treasury in 2014 his replacement, John Fraser, did not take up the role, and neither did secretary of the Public Service Commission John Lloyd when he took over from Stephen Sedgwick. Interestingly, all three were appointed by Tony Abbott.

Many happy returns? Yesterday was Anthony Albanese’s birthday, and as such many of his fellow MPs wished him all the best for his special day. His best frenemy Christopher Pyne had something else planned, telling FIVEaa yesterday that perhaps he had some hemlock for Albo. Then in Parliament he had this wish, except the lack of goodwill in the House of Reps got in the way:

Ideas boom — and bust. Prime Minister Malcolm Turnbull has got everyone thinking about innovation and agility. Lucky we have the University of Queensland’s Business School, which is now offering one-day courses in “offshoring” — yes, that’s courses in how to move parts of your business away from Australia. According to a press release, the course will be taught by Mark and Aimee Engelmann, who were named Business News Australia‘s Brisbane Young Entrepreneur Trailblazers of the Year last year. Says the release:

“UQ Business School Executive Education Director Richard Kennerley said it was introduced in recognition of the global trend towards outsourcing labour to lower-cost countries and the challenges businesses faced in successfully ‘offshoring’.

“In 2015, Australian businesses saved an estimated $24.8 billion through offshoring,” he said.

“But these businesses face challenges in managing remote teams, establishing cross-cultural rapport and building a long-lasting return on investment.””

Some how we don’t think that’s the innovation Turnbull was so keen on.

The perfect is the enemy of the good. This morning the Oz had a lovely page 3 story on the success of the Teach for Australia program, extolling the virtues of high-achieving graduates sent to disadvantaged schools. The piece used the case study of Ryan Steed, a law graduate-turned-teacher, and said he had scored an ATAR (Australian Tertiary Admission Ranking) of 99.95 out of 100. But 99.95 is the highest ATAR available — as it is a ranking, a score of 100 is impossible to give out, because a student can’t be better than 100% of those given a score. Maybe the Oz‘s journo needs to go back to maths class.

I’ve just thought of a way to stop Donald Trump. It would take one very strong man and a bottle of depilatory mixture.
(A wig wouldn’t work.)