Close but no cigar. Yesterday, The New York Times reported on a young Goldman Sachs employee who’s been placed on paid leave for selling Trump-inspired merchandise with Christian messages. His name is Luke Thorburn, and he used to live in Brisbane. He shares a last name with the CEO of NAB, so a tipster wondered if he were Andrew Thorburn’s son. We asked. For the record, he isn’t, as NAB assured us yesterday afternoon.

School trips grounded? A tipster tells us that public schools in New South Wales are banning overseas trips for students:

“I am a parent of children attending a NSW public school which has been running overseas excursions for many years. I have just been told by a teacher at that school that the NSW Department of Education has placed a ban on all overseas excursions until further notice in the wake of the recent European terrorist attacks. Overreach and allowing the terrorists to win.”

The Education Department tells us that’s not true, but that any overseas excursion follows a rigorous planning process using the Smart Traveller website to navigate any risks. Has the school made the decision on its own? If you know more about school trips cancelled because of terrorism concerns, drop us a line.

Super Tuesday battles waged. It’s Super Tuesday in the US, where Democrats and Republicans in many states across America will be voting on who will lead their parties in the presidential election. It’s being used as a chance for Australian senators James McGrath and Lisa Singh to battle it out with political posters: 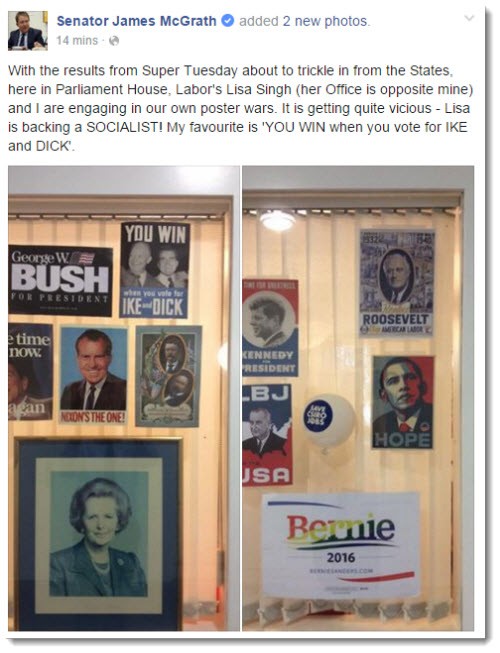 And from our writer-at-large Guy Rundle, reporting from the front lines: With the polls having only just closed in Georgia and Vermont and open for two hours more in Texas, few hard results are on hand for the make-or-break primary day. Nevertheless, based on exit polls, a few far-from-surprising projections have been made: Georgia has gone for Donald Trump, who is running at around a huge 50%, with Ted Cruz trailing badly behind on 21%, and Rubio nowhere. Trump is also leading in Virginia, a state Rubio was hoping to win from him. Trump has about nine points over Rubio, 39-30. Trump is at 37, Kasich at 27 in Vermont — bad news for Kasich, who was hoping for Vermont and Massachusetts wins. On the other side, Hillary Clinton has repeated her South Carolina slam in Georgia, winning 75-25 against Bernie Sanders. His numbers among black voters were as bad as in South Carolina, with about 85% of black voters supporting Clinton. Hillary is running 63-37 over Bernie in Virginia. Sanders won Vermont by approximately 90%. The full report will be on the website late this afternoon, so stay tuned. Both Alabama and Tennessee have gone for Trump and Clinton.

#SimkinWatch. The last time many of us saw former ABC political reporter-turned-Tony Abbott staffer Mark Simkin, he was looking dejected next to Peta Credlin at a function marking the end of Tony Abbott’s reign as prime minister. But Simkin has turned up elsewhere, and although it’s no PMO, it’s no small position: Simkin is listed as the media contact for Social Services Minister Christian Porter. A tipster says: “Most journos wouldn’t have much reason to find that out because social services isn’t exactly front page news most days — it’s where Abbott sent Scott Morrison in hopes of diminishing his rise in the party.” Porter was once touted as a future premier in WA before moving to federal politics in 2013 and gaining a major ministry within three years. Maybe Simkin is looking to hitch his cart to a future winner?

NBN reconsiders tower in sacred site. A tipster suggested that if Prime Minister Malcolm Turnbull were concerned about indigenous issues, he should look into the impact the NBN might have on indigenous sites. A particularly difficult problem facing NBN is installing towers without damaging sacred indigenous sites. In Alice Springs, the company did extensive mapping of indigenous sites and has made the map available to other construction companies.

But it hasn’t all been smooth sailing. Residents in the Towong Shire Council area in north-east Victoria have been fighting the installation of a tower in Bethanga since last year, with five people complaining about a tower on the usual NIMBY complaint grounds (it’ll ruin my view, it causes cancer, etc). NBN had assessed whether there were any places of cultural or heritage significance, and when the council issued a notice of a decision to grant a permit to build the tower, there were no registered Aboriginal items or places on site.

But before NBN could build the tower, the Office of Aboriginal Affairs Victoria found a sacred Aboriginal tree close to the proposed tower location that has subsequently been registered as an Aboriginal place. Residents of Bethanga have taken a case to VCAT appealing the council’s decision to grant a tower permit.

NBN, however, has decided to seek an adjournment so it can consider options to build the tower without impacting Aboriginal heritage sites.

Ideas Boom in the toilet. Ms Tips has been looking for ideas and agility everywhere, but in the toilet is not where she expected to find it: 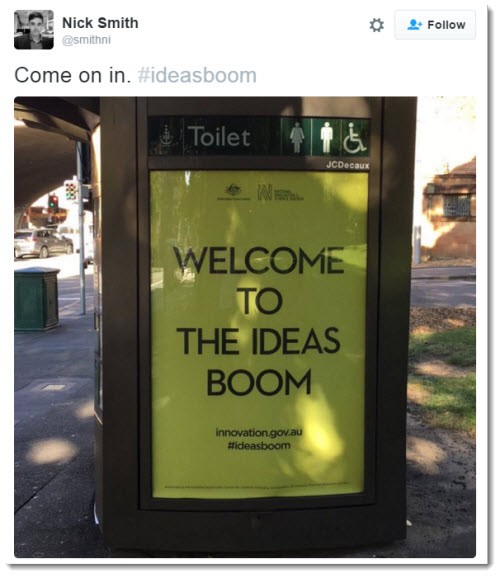 When the parents of any school system receiving massive taxpayer support are complaining about a school’s overseas holiday excursions being threatened we need to ask is taxpayer funding for those schools money well spent.

How do I get placed on paid leave? Government bailout?

Interesting that Sen McGrath isn’t ashamed to have shrub & tricky dicky posters on his wall, never mind MrsT.
Is the final item a reference to explosive diarrhoea?

I never really knew what the ideas boom is supposed to be but now I really don’t want to know.