Isentia Index: A Bullock drops away, the Labor caravan moves on

Is Abbott plotting his return? Was George Miller robbed? Will the government actually make a decision on financial policy?

The former PM Tony Abbott is back up to the second spot that he has occupied more often than either Opposition Leader Bill Shorten or Treasurer Scott Morrison since last September, this time giving the Liberal Party Room the benefit of his wisdom about making no changes to negative gearing or superannuation and looking purely to expenditure cuts to solve the deficit issue. Perhaps a Medicare co-payment? Making people wait six months for the dole? Those might work …

Negative gearing remained the current tax topic of debate, with some reports suggesting the government will indeed leave it entirely alone to clear the path for a continued full steam attack on the Labor Party policy. This will only leave super reforms, and while there’s potentially a mountain of cash to be clawed back there, most of the media are questioning the government’s appetite for anything major.

Meanwhile the bright shooting star that was Senator Joe Bullock has snuffed itself out less than two years into his Canberra career, saying he refused to campaign in support of a binding vote on same sex marriage and therefore had to resign. Most of the plaudits came from the National Party.

Health Minister Sussan Ley jumped 12 places as another round of big private insurance premium rises was announced. The minister claimed she had saved customers from even higher increases with a “please reconsider” letter. PUP leader Clive Palmer tried the old switch and bait with a bizarre question about whether the ‘third oldest’ Prime Minister was merely warming the seat for the triumphant return of Monsieur Abbott, which made people forget about Queensland Nickel for all of half a second. 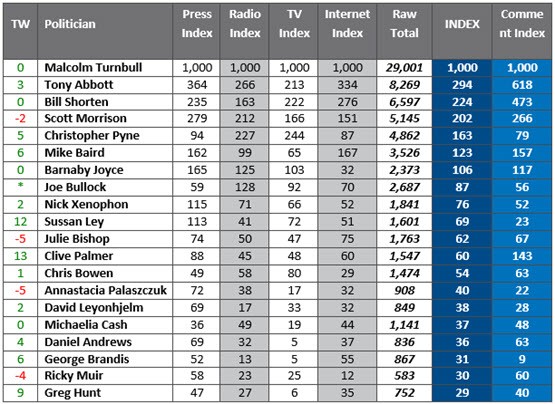 The usual suspects on social this week, apart from NSW Premier Mike Baird, who is still copping some stick for Sydney’s lockout laws.

A quieter week on talkback, Clive making a small splash with his dreams of the Abbott redux, which went down a treat on some stations.

Was George Miller robbed? You bet he was. He should already have several of those gold androgynes on his mantle. In these cases I always remember that the Academy once gave an Oscar to Marisa Tomei for My Cousin Vinny ahead of Judy Davis, Vanessa Redgrave, Joan Plowright and Miranda Richardson. Enough said.

Mad Max: Fury Road is not a ‘feminist masterpiece’

The Baillieu Dump: why classic films are destroyed after release