Reaping the spoils of naughty language. On Wednesday last week the red chamber of parliament took on a blue hue as Employment Minister Michaelia Cash answered a Dorothy Dixer in question time about “instances of bullying, harassment or intimidation in the building and construction sector which should be condemned by all Australians but which, sadly, are not”. The question, from Senator Joanna Lindgren, led Cash to quote from a Federal Court ruling against the CFMEU, in which a union official said to a foreman: “Hey scabby, gay boy, gay boy, gay boy, scabby” and to quote from Senate estimates, where it was alleged that a union organiser told a woman on site at Barangaroo: “I hope you brought your knee pads; you’re going to be sucking off those dogs all day.”

The extensive quotation by Cash led to an outcry among the opposition over unparliamentary language, and President of the Senate Stephen Parry promised to investigate whether or not direct quotes should be censored if they were barely appropriate on a work site, let alone in the Senate. He gave this verdict yesterday:

“Had the quotes been in relation to a protected person, there is no question that they would have been completely out of order and required to be withdrawn. Had the offensive words been scattered through a debate, it is again highly likely that any chair in this place would have queried them as inappropriate. Where no protected person is involved, however, and where the language used is strictly necessary to make the point, it makes it very difficult for the chair to prevent a senator from quoting such language or to require its withdrawal. If senators choose to enter this territory, they do so at their own responsibility.”

Malcolm’s waffles. Yesterday the Prime Minister was asked for his advice to young prospective first-home buyers about how they could get into the market, let alone live the Australian dream of negative gearing multiple properties. His answer went on for a few minutes, and left us still none the wiser on how to buy a house:

JOURNALIST: Prime Minister, just a negative gearing and housing affordability. Do you have a message to young people who don’t have parents who can act as a guarantor on a mortgage, who can’t afford a deposit of say, $100,000, and probably face the prospect of renting for the rest of their lives? And only ever seeing housing going up and up in the capital cities? Do you have a recommendation for what those young people can do?

PRIME MINISTER: Look, let me just say this to you. The Labor Party’s policy on negative gearing and capital gains tax are calculated to lower the value of Australians’ homes. They are proposing a massive shock to the market, pulling out 30 per cent of the buyers for established residential property. It is designed to lower the value of Australian homes. It would be a very significant negative shock to the market. And, you know, turning to…

PRIME MINISTER: … Turning to capital gains tax, let’s just consider this, what is our central challenge? What is a central challenge to transition to a 21st-century economy? To assure young people the jobs of the future? To ensure that they will have jobs? How do we do that? We do that by promoting investment and innovation. That is why are innovation statement sets out real incentives for people to invest in the CEAs of the future. If there were some naval officers leaving a naval vessel, retiring from the Navy today to start up a competitor to CEA or an emulator of CEA. Under our plan they would have, there are real incentives under our innovation policy, there are real incentives for people to invest with them. What does Labour propose? Labour is proposing to increase capital gains tax by 50 per cent. So, what Labour are saying to investors is, if you invest in any project, any business, any asset, we will increase the tax on any gain you may realise by 50 per cent. They are setting out to reduce investment, to discourage investment. Now, we believe the future of our economy, the future of our security, the key objective of our economic growth has got to be around innovation, technology, opening up markets, investment and employment. That is what we mean by growth, we mean by growth, growing our opportunities. And, a key part of that is investment. So, we are in favour of investment, we are encouraging investment, labor is increasing the tax on investment by 50 per cent and that can do only one thing, result in less investment, less growth, fewer jobs.

That answer made us think fondly of Joe Hockey’s “get a good job that pays good money”, and was followed up by an accusation of waffling:

JOURNALIST: One of your colleagues has been quoted in the paper today saying that you are waffling too much in Parliament and you need to give a clear message on tax.

Lazarus scary sporting analogies. Glenn Lazarus has announced his first candidate for his new party to run for the Senate at the next election, continuing the sporting analogies that have made his political career somewhat disturbing (no one needs to hear about Hopoate tackles). Kerrod Walters, who played rugby league with the brick with eyes, will be running for the Senate in Queensland, where he now runs a commercial cleaning business. Lazarus announced it with this questionable photo op with fellow ex-PUP Senator Jacqui Lambie: 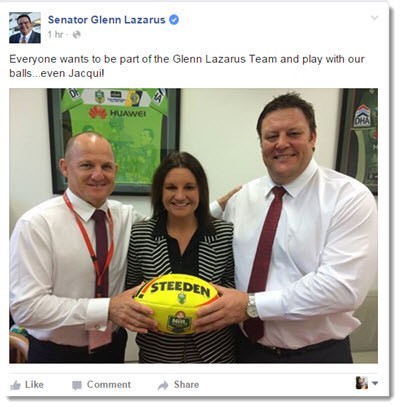 Betting it all. There were congratulations all round for the Richmond Football Club upon the announcement that the club would join with six other Victorian AFL clubs and no longer accept sponsorship funds from betting companies, as part of signing a responsible betting charter. It’s a move that puts the AFL’s own policy out in the cold, as the league itself last year signed a $10 million dollar deal with online betting company CrownBet, which Crown has a 67% stake in. The deal means that CrownBet is the AFL’s official betting partner, and users can stream matches live through the app (instead of paying Telstra to do it through the AFL app). It’s also a strange stand to take when so many AFL clubs continue to take money from poker machines at local venues — and would struggle to profit without them.

To laugh or not to laugh? The Oscars took on a distinctly political tone yesterday, and host Chris Rock was right in the middle of it. Rock’s opening monologue used the opportunity to address the controversy over the lack of racial diversity among Oscar nominees, with many of the gags getting mixed reactions from the white folk in the audience, who weren’t sure whether they should laugh or not:

Tips and rumours: Reaping the spoils of naughty language.

What the hell are “the CEAs of the future… naval officers …retiring .. to start up a competitor to CEA or an emulator of CEA.“? Constipated Economic Analogy?

According to a letter to the Age today, Michaelia Cash got fewer primary votes than Ricky Muir, 349 to 479. So much for democratic voting reform, I wonder how many other MPs are sitting similarly hiding in the govt ranks.

There’s still no willingness in the Commissariat to launch a genuine and thorough investigation into the Building Industry for fear you might then be pressured to examine similar problems, resulting in revenue loss; but as a capitalist business, that’s your prerogative, isn’t it.

“Reaping spoils ….” I just wanted to note that I have never heard Senator Cash say anything worthwhile in any venue. My one memory of her speaking in the senate is her screaming like a banshee, and making what looked like a nazi salute. And whatever it was, it was still nonsense.

It’s easy to believe, bushby jane, that letters to newspapers supply much of the ‘data’ on which you base your political stands.