Bolt the Vaticanologist? And other media tidbits of the day.

Sky News’ new Vatican correspondent? Last month, Andrew Bolt promised his readers on his Herald Sun blog that despite his Channel Ten show not having returned, he’ll be doing more TV than ever this year. Which is why, when he popped up on Sky News last night, we wondered if the arrangement was permanent.

Not quite, a spokesperson told us. Bolt was described as a Sky News Contributor last night, but that’s not an on-going position.

“Sky News has a wide range of contributors,” Crikey was told. “Andrew [Bolt] has joined us for this assignment only at this stage.”

Bolt joined the network to cover former Archbishop of Sydney George Pell’s appearance before the Royal Commission into Institutional Responses to Child Sexual Abuse. Pell is testifying from Rome, because he says a medical condition has prevented his flying home for the occasion. On Sky, Bolt debated former NSW Premier (now Sky News host) Kristina Kenneally on the issue. But he also spoke to host Laura Jayes in-studio for a curious piece-to-camera. As an aside, Sky News’ ground reporters have to set up and operate cameras on their own (most networks send across teams of two or three people when leaving the studio). We wonder if Bolt had to set himself up alone? 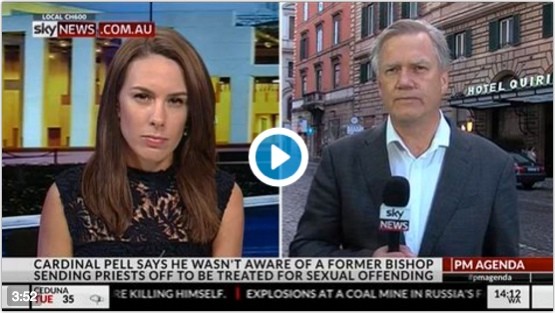 Bolt is one of Pell’s greatest supporters in the media, having gone so far as to trash his own paper’s scoop when it published that Pell was being investigated by police last week. In the video above, he took seven words to tell viewers there’d been an “enormous hate campaign” against the embattled cardinal. — Myriam Robin

Rankine v Oz. Former South Australian education minister Jennifer Rankine has had a win at the Press Council, with the body substantially siding with a complaint she made against The Australian over a series of articles that tied her resignation from cabinet to an ongoing investigation of her by the Independent Commissioner Against Corruption.

The investigation, into whether Rankine had employed public servant Vicki Antoniou in inappropriate circumstances, eventually concluded that none of the allegations against Rankine could be substantiated. But Rankine was unhappy with the coverage in The Australian about both the investigation and its conclusion, which she said implied she had resigned as a result of the investigation.

The Australian wrote that Rankine had resigned “amid” an investigation, which, the Press Council said, was “not technically incorrect”. But the Press Council ruled that the final article, where the investigation into Rankine was closed with no findings against her, “unfairly reprise[d] the allegations that had been found out be unsubstantiated and not until late in the article is the clearance by the ICAC Commissioner mentioned”.

“Accordingly, the Council concludes the article is not fair or balanced and this aspect of the complaint is upheld.”

The council also pinged the Oz on a claim, made in several articles, that there were two bodies involved in investigating Rankine. But one of these “investigations” amounted simply to a referral to SA’s ICAC, rather than a full investigation. The Press Council also said the an article inaccurately paraphrased a radio interview Rankine had given.

The Oz didn’t agree the paraphrase was wrong. It also said the reporter (SA bureau chief Michael Owen) had tried to contact Rankine for comment, and had sent an email to her media adviser before the appearance of the first article. But, it said, the resposnes were “dismissive”, and referred it to Hansard rather than answering Owen’s questions. The Press Council did not uphold the part of Rankine’s complaint that said she had not been given fair opportunity to respond, despite her saying the Oz hadn’t published her letter to the editor with her complaints. — Myriam Robin

Retracted ABC Nauru rape claim kicks on. The ABC has removed its articles that first made claims (now retracted) that a five-year-old had allegedly been raped on Nauru, after paediatrician Dr Karen Zwi contacted the ABC last week to say she had been contacted by the Department of Immigration and Border Protection about the claims, even though the claim was not in information she provided to the ABC.

A substantially updated correction on the ABC’s online corrections page now includes a statement from Zwi where she says that while she never gave identifying information to ABC journalists, off-camera she did have discussions about a number of children. “She believes the situation has arisen as a result of a genuine misunderstanding as a result of the cases being mixed up”:

“Dr Zwi raised no objection to the amended reports. However on 26 February Dr Zwi contacted the ABC saying the allegation relating to the five-year-old being sexually assaulted was

“‘… not information I provided. This has resulted in the Department of Immigration and Border Protection requesting information about the five-year-old, which I cannot provide,’

“Consequently, ABC News has removed the original article from ABC News Online; has modified the editor’s note on 7.30 and Lateline websites; and added editor’s notes on other online stories.”

The Festival of Howard continues. Had enough of John Howard in The Australian and Fairfax papers over the weekend? We hope not, because he’s also appearing on 7.30 tonight in a live interview with Leigh Sales.

Revenue up, but stocks down? The likes of News Corp Australia chair Michael Miller and his offsider, Peter Tonagh, will be wondering why the Ten Network’s share price continues to sink. The shares closed at 99.5 cents on Friday – after the recent 10 for one consolidation, that is equal 9.5 cents . Foxtel bailed out Ten with a 14.9% capital injection at 15 (now $1.50) cents a share – which is now fallen a third in value in a month. So far the paper loss is around $25 million in only a few weeks.

The fall has come despite more encouraging TV ratings this year and a big jump in revenue in the back half of 2015. Ten boasted in late January:

Despite that inflow of cash, Ten shares have fallen from a high of $1.50 on January 25, just before that revenue news statement three days later, to 99.5 cents last Friday. They are down 15% in February alone up to last Friday. Ten is not alone, the shares of the Nine Network have fallen 10% this month alone, as have the shares of Fairfax Media.

Normally you would have expected the shares of Nine and Fairfax to rise because with mooted media law changes in the offing, they are two of the top candidates for possible marriage. Even the shares of Southern Cross Media, considered the company most likely to be taken over, were down 4% in February.

This weakness in media stocks is despite the proposed changes in the Federal Government’s joint party room today for discussion and approval. Investors can’t see the changes (which would end the control and ownership provisions) making their way through the current senate without significant change, or outright rejection. — Glenn Dyer

New paper, bad results. A few hours after launching The New Day in the UK — a daily paper with no website that aims to lure people back to print — its publishers released 2015 sales and profits figures that belied the upbeat message (and lack of hard news) in the new cheap tabloid. In fact, the continuing slide in print ad and circulation revenues is more of the same and accelerated last year, and digital, which, while growing strongly, is still falling well short of replacing the lost analogue revenues and profits. 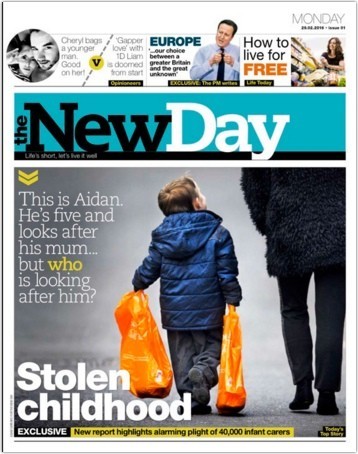 Trinity’s operating profit fell more than 16% to just over 82 million pounds (around A$160 million). There was an even nastier fall in underlying print advertising revenues, which tumbled 16.6%, from 521.6 million pounds in 2014 to 458 million last year. That was a fall of more than 63 million pounds, and the 32% jump in digital revenues to nearly 43 million went nowhere to filling that gap, let alone providing revenue growth.

Trinity, like News, Daily Mail, Express Newspapers and other publishers in the UK, was caught by a huge slide in print ad bookings from around the middle of the June quarter onwards. That ground through the rest of the year, forcing revenue and profit downgrades, restructurings in groups such as Trinity and a number of regional publishers (such as Johnston Press, which is buying the “i” newspaper from the about-to-close Independent). — Glenn Dyer

Front page of the day. Survivors to Rome …

The Masked Singer slips, but still leads the ratings for Ten

This Time Next Year provides a strong return for Karl Stefanovic

Congrats, Crikey, on another superb piece of flooding the article with waffle, thus discouraging subscribers from the temptation to analyse any of your prejudices too carefully.