How Fairfax and Paul Sheehan bought the lies told by “Louise”

Fairfax has today apologised for publishing the story of "Louise", who said she'd been raped by Middle Eastern men. But alarm bells should have been ringing long before the article went to print, write Nicky Bryson and Myriam Robin.

A week after the story of “Louise”, who claimed she had been gang-raped by Middle Eastern men, was first splashed on the front page, and four days after Paul Sheehan acknowledged how it all fell apart, The Sydney Morning Herald this morning broke its silence on how one of its senior writers published a story of horrific abuse and bureaucratic indifference that was, probably, false. But the paper maintains Sheehan’s line that “key elements of the story were unable to be substantiated”, despite the wealth of evidence that the story told to Sheehan was highly unlikely, and should have raised red flags for both Sheehan and his editors. 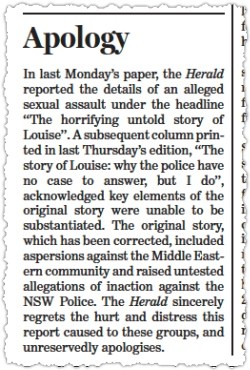 The paper stated at the bottom of page 2 this morning:

“In last Monday’s paper, the Herald reported the details of an alleged sexual assault under the headline, ‘The horrifying untold story of ‘Louise’,

“A subsequent column printed in last Thursday’s edition … acknowledged key elements of the original story were unable to be substantiated. The original story, which has been corrected, included aspersions against the Middle Eastern community and raised untested allegations of inaction against the NSW Police. The Herald sincerely regrets the hurt and distress this report caused to these groups and unreservedly apologises.”

The story highlights a startling case of journalistic error, made all the more significant because it came from such a senior writer and was taken seriously enough to put on the front page of Australia’s most trusted newspaper.

Sheehan has apologised several times in the past week, and got on the front foot admitting his error before Fairfax’s competitors got wind of it. He has been relatively transparent about the reasons why he came to believe ‘Louise’s’ story despite little corroborating evidence. But if he had not, it is likely the scandal would have come out anyway. In the days immediately following the story’s initial publication, many on social media noted that aspects of it seemed far-fetched. The similar claims made by a woman in several Reclaim Australia rallies were recalled. Some, like Richard Cooke, who tried to contact ‘Louise’ wrote that they found her a difficult subject who was unable to give journalists ways to validate her story.

Despite Fairfax’s apology today, Sheehan has said the fault for the column was his alone. In an interview with The Australian last week, he absolved his publisher of responsibility, while intimating his unblemished record ensured his editors overlooked any factual concerns. “The foundational error I made, from which all flaws in the process came, was that I was put in touch with the woman by a good source, who I trusted, on the basis that she wanted justice,” he said.

Sheehan continues clinging to his claim he was hoodwinked by a “carefully constructed” story “on a foundation of embellishments, false memories and fabrications.” He defended his lack of research telling The Australian, “We knew the column would have to make clear that these were allegations and her name were not in the police or hospital system over this matter.”

Despite Sheehan’s claims that this was fundamentally a case of misplaced trust, the very first red flag casting doubts on the story were there in his first dispatch.

In the narrative Sheehan tells, “Louise”, a tired nurse, parked her car a short distance from the hospital where she worked and went to sleep still wearing her uniform. She was then pulled from the car, raped, beaten, had her throat cut, teeth kicked out, mouth urinated in, spat on and was left to die.

“A couple of homeless guys found me … At the hospital they were asking my name and I couldn’t speak. They called me Jane Doe.”

“Louise” goes on to claim she was so badly injured — including 79 fractures — she remained in hospital for several months. When police came to visit she couldn’t speak. She claimed they said they would come back, but never did.

The very nature of the horrific crimes “Louise” alleged took place would have warranted the attending ambulance officers to notify police, and she would have been entered into hospital and police records. The crime scene would have been secured and forensic specialists would have processed her vehicle for evidence. Sources within the NSW hospital system tell Crikey her teeth, which Sheehan wrote had been “kicked out”, would have been collected along with samples from bodily fluids. Hospitals do not keep people in beds for two months without an extensive paper trail.

Meanwhile, on the police side, a call to police would have resulted in a file being created to show a call to police about a crime had been made, a NSW Police spokesman told Crikey. If police had attended, this would have then been the result of a “job” being created. Whoever attended (likely a detective given the type of allegations) would have then had to file notes from the visit to the job file, which would also collect any subsequent action by police. “There’d be two levels of record-keeping,” the spokesman said. The fact that “Louise” was unidentified at that stage wouldn’t matter — the crime’s date and location would be logged in the system. The spokesman added that requests from media about particular crimes were very common, and police media routinely and easily checked these records to confirm to media that police were aware of and had acted on an incident.

What “Louise” described and Sheehan recounted was a major crime, possibly even an attempted murder, where the victim had been found at the crime scene. But others have written that Sheehan did not contact police about the claims (Sheehan wrote that ‘Louise’ gave him the name of an officer who dealt with her, who allegedly said six months later that she could “never prove what happened” — Sheehan wrote he checked and the man was still in the NSW Police, but did not write if he approached him or NSW Police about the claims). Nor, it seems, did Sheehan’s editors search for her name, which would have yielded further red flags about her claims, as Richard Cooke wrote in The Monthly — the woman known as Louise had told a similar story, with varying details, to Reclaim Australia rallies.

Today, Sheehan has tweeted that the SMH “regrets any hurt caused to the Middle Eastern community. I add my name to that regret.”

When “Louise” told her story at a Reclaim Australia rally, her audience responded with chants of “fuck Islam”. When she told it again to Sheehan, the veteran writer lapped it up. Alas, he wasn’t any more clear-headed than the chanting throngs in the video clip.

Spinning the Media: The line between advertorial and content just got blurrier

Sheehan is really the George Costanza of Australian media. It’s not a lie if you really, really want it to be true.

Such an extraordinary lapse of editorial process at every level. How the SMH can continue to employ Sheehan defies belief. If this standard of journalism is acceptable to them then they really have no standards.

I don’t expect anything better from Sheehan, but the point is that the editors shouldn’t have either. They should have done the basic checks themselves if their prima donna clickbait writer wasn’t forthcoming.

Let’s face it, while Sheehan stuffed this up right royally, the real heads that should roll are editorial.
Not going to happen at the clusterf*ck that is the SMH.