Paul Sheehan's harrowing rape story that wasn't. Plus other media tidbits of the day.

Sheehan, who has written a book on Sydney’s rape epidemic in the early 2000s, initially sold the extraordinary story by saying he had interviewed the alleged victim, “Louise”, “for several hours”:

“She has 11 school exercise books filled with diaries. She has extensive medical records. She was consistent in her answers. When she gave me verifiable facts, they were verified. Her years working as a nurse in the inner city gave her extensive contact with prostitutes and the homeless. She says she has a degree in psychology.”

But on social media, some thought her story sounded familiar. It appears a woman has been telling a similar story at Reclaim Australia rallies. In a column posted last night, Sheehan explained how he came to change his view on her credibility:

“Prior to writing the column I had Googled her name, and checked our files, and found no red flags. Now all I could see were flashing red lights, barriers and sirens.

“During four hours of interviews conducted over four conversations, when I pressed her about why there was no complaint in the system, an obvious red flag, she had claimed she had gone to report the crime six months after the alleged event, but been told by a police officer that she had waited too long, had no evidence and there was no credible claim to make.

“I failed to test that claim adequately.”

Writing in The Monthly this morning, Richard Cooke wrote of his own interview with “Louise”, conducted yesterday. He was scathing of Sheehan’s original piece, saying his own online research immediately showed issues with the story:

“[T]he whole piece was an insult. It was a bald accusation that dozens of Muslim men were going on rape sprees without detection, and that the police were ignoring it. It was an accusation made on the flimsiest proof, at the maximum volume. By the time this crawling pseudo-correction was made, the column had already been shared 11,000 times. It’s all too little, and much, much too late.”

APN wants to sell its papers. The crisis in Australian regional newspapers is about to worsen after the country’s biggest owner of rural titles, APN News and Media, announced it was quitting the sector.

APN’s decision to divest from its regional media arm was not accompanied by an announcement of a buyer. The company owns 12 daily regional papers and dozens of other less frequently published media products.

Many regional areas could be left without a local paper unless APN can find a buyer willing to keep the papers going.

APN’s decision comes immediately after the federal government’s decision to allow media companies to own more than two media assets in one market — though it is doubtful that regional TV or radio businesses such as WIN, Prime Media or Southern Cross would have any interest in buying regional papers, many of which have lost sales hand over first in the past few years. The legislation hasn’t even made it through federal Parliament and could be held up in the Senate.

Both Fairfax Media and News Corp Australia (which is run by former APN CEO Michael Miller) will loom in many people’s minds as possible buyers of the papers, many of which enjoy local monopolies. News Corp owns 14.9% of APN, much of it bought at 88 cents a share, compared with APN’s share price yesterday of 50 cents.

APN released news of its decision with its 2015 full-year financial report this morning, which revealed a loss of $10 million ($11.5 million in 2014), thanks to the non-cash write-down of $50.8 million on the book value of Australian Regional Media (ARM).

APN will concentrate on its’s radio business, Australian Radio Network which saw a 25% jump in earnings before interest, tax, depreciation and amortisation to $82.8 million. — Glenn Dyer

Former treasurer Peter Costello replaces David Haslingden as chairman from next Tuesday, March 1 — a surprise in itself. There was no explanation as to why the change in the chairmanship was needed, and why so quickly. But there have been whispers of board and managerial disruption in recent months, especially between former CEO David Gyngell and Haslingden. On top of that, Nine is being sued by its biggest shareholder, Bruce Gordon, and his WIN Corp over Nine’s plans to stream its live-to-air TV broadcasts into regional markets, a move that will directly undermine the value of WIN, which is Nine’s regional affiliate.

With many in the markets and TV industry believing Nine and Fairfax Media will merge (they have a streaming joint venture called Stan), Costello’s appointment as chairman will cause a rethink. Fairfax is now chaired by Nick Falloon, a former CEO of Nine and chief financial officer, as well as a former chair of Ten.

Costello will remain chairman of the Future Fund, and Nine says he will keep the chairmanship of ECG Pty Ltd, which describes itself as “a boutique financial advisory” company.

And at Nine, he and newish CEO Hugh Marks will have their work cut out for them: a poor interim result disguised by a higher dividend, and a massive share buyback, which will require up to $150 million be spent spent buying back almost 20% of the shares over the next year. Lifting the dividend to 8 cents a share from 4.2 cents will also help support the shares, but the buyback is the key.

The bottom line is that Nine, like Ten, Southern Cross, and its main rival, Seven West Media, has been hit hard by the slowdown in ad revenue and the desertion of advertisers to social media and all things digital. — Glenn Dyer

The finding is contained in a research paper by Deakin University journalism academic Colleen Murrell. Her methodology relied on looking at what pieces were put in the “editor’s pick” newsletter sent once a day from The Guardian UK, US and AU. The newsletter is automatically generated from the front page, where the placement of stories is chosen by the editor.

The Guardian US had a larger mix of local and international content, with 57% of the stories being local, while at The Guardian UK, only 42% were produced by British journalists.

“[M]igration and refugees, the environment, politics (at the national level primarily), freedom and security (things like data retention and the ‘Queensland Bikie Laws’), and the fifth one is indigenous affairs. … They focus very carefully on what fits and they have very limited resources so stories that don’t fit in the five things they want to be the best in the country at … If it doesn’t fit then they’re very ruthless about ‘well should we be doing that at all?’”

The Guardian Australia focuses so heavily on politics because of a gap in the market for high-brow, liberal-leaning political commentary, according to global editor-in-chief Kath Viner:

“According to Kath Viner, the Sydney Morning Herald, while serious in print, has opted to go down-market in digital, leaving the Guardian to poach readers among the liberal progressives who browse online for ‘intelligent comment’.”

The Guardian globally announced a 53.6 million pound loss in January this year. The loss will involve redundancies, but Australian editor Emily Wilson has said the Australian operation will be “insulated” from any cuts. — Myriam Robin

Video of the day. Dee Madigan unleashes the fury and the facts about the Safe Schools Coalition. 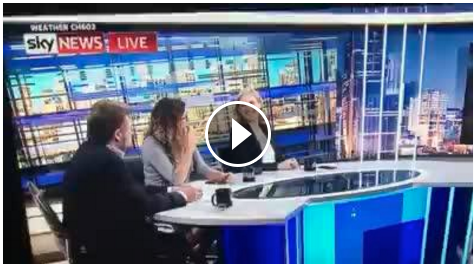 Front page of the day. Who knew Geelong was so cosmopolitan? 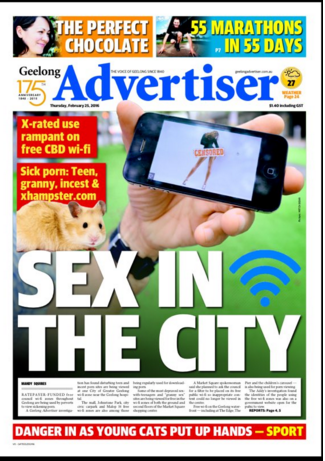 Christ, if Mike Carlton’s private tweets can get him the heave-ho, hard to see how Sheehan’s column won’t. It’s a pity, I think he’s actually one of the more interesting RWDB’s around (if he is that at all)…but…man, talk about treading on your slug. You really would have thought his editor would have run it past the Fairfax Cop-Contacts-Ometer first, yeah…?

It really is very telling that the Sheehan column got published and promoted to the front page.
What does this say about their editorial processes and standards?

I really wish that Fairfax would indicate if a column is written by Paul Sheehan in the frontpage link so I don’t reward that drivel that he generally writes with a click.

Jack Robertson, we need to remember that Crikey shows even less care if they ‘like’ a story.
Ditto to lloydois.
John Taylor, surely you’ll acknowledge that just because the politically correct Chattering Classes are obsessed with faux apologies doesn’t mean the more rational Australian Citizens must also jump into that nauseous ‘intellectual’ quagmire?