Isentia Index: The honeymoon is over, are we back to a place where policy matters?

50-50. It may be an outlier poll, but it will be interesting to see if any type of panic sets in to a government that all of the media, and even most of the opposition, thought were set to waltz home in the election due later this year. Treasurer Scott Morrison’s speech at the National […]

50-50. It may be an outlier poll, but it will be interesting to see if any type of panic sets in to a government that all of the media, and even most of the opposition, thought were set to waltz home in the election due later this year. Treasurer Scott Morrison’s speech at the National Press Club was widely criticised as lacking vision or policy detail, while the opposition seems to be getting some points for coming out with a number of specific tax reform policies late last year.

The other big issue of the week was the long overdue reform of Senate voting, where the basic democratic principle that your vote should only go to people that you have actually expressed some kind of preference for is finally coming back, after more than 30 years of intense back room deals rather than actual voter preference usually determining the sixth position. Those deals finally blew up in the face of the major parties over the last two elections. Greens Leader Richard di Natale leaps as his party once again takes the “sensible” middle ground, while Labor, despite its own committee members fully supporting the changes, seems to be clinging to the power of the back room, even though they have been comprehensively losing that battle for some time. Senate crossbenchers are against the move (what a shock!), apart from Nick Xenophon, who has the appalling temerity to actually get his own votes.

The other big mover was Immigration Minister Peter Dutton, as the issue of baby Asha and the other children still in detention continued to be strong across social media and news outlets. The minister relented in Asha’s case, letting the family stay in the community, but reiterating that they will eventually be returned to Nauru. 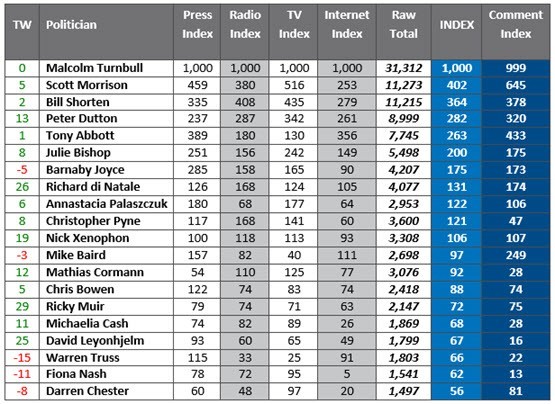 The treasurer actually pipped the PM for social chatter, although both were pretty low, compared to those vituperative Abbott and Hockey days.

But Turnbull stayed well ahead on talkback, with the former PM still a fond memory for many, a full five months after his defenestration.

Unfortunately, the ugly side of Australian fierce competitiveness returned in the second test in NZ this week. Let’s hope this is not what a return to a more ‘blokey’ spirit in the Aussie cricket team means in practice.

50-50. It may be an outlier poll, but it will be interesting to see if any type of panic sets in…

Too late Patrick, that train has already left the station.

I disagree with your contention that the proposed Senate voting changes are somehow ‘more democratic’.
The Labor party backs the proposals from the Parliamentary Committee set up to examine this issue. Do not make the mistake of accepting that the committee proposals are what the LNP/Greens/Xenaphon deal is about. If it was, then they wouldn’t need a ‘deal’, would they.
No…their proposal is about more seats for themselves (by devious means), and shafting the Labor party and the cross-bench Senators, while telling fibs to the voters.
You need to take a closer look!
Everyone needs to vote BELOW the line, and put these three parties last…especially the traitorous Greens.