Stop the tweets.  One of the more popular theories behind an incendiary Twitter account called the Republic of Nauru is that it is run from Australia by Lyall Mercer from Mercer PR. Mercer PR has for the past few years facilitated communication between Australian journalists as the government of Nauru, and last year Mercer locked his Twitter account after he emailed a police report revealing the name of an asylum seeker who said she had been raped on Nauru to journalists.

The account often tweets criticism of Australian journalists’ reporting on Nauru — while the government continues to refuse to give anyone but Chris Kenny a journalist visa – and has even gone so far as to single out ABC journalists for their reporting.

Ms Tips understands that Mercer PR is not responsible for any of the public-facing communications from the Republic of Nauru, including the Twitter account, but offers high-level communications advice to the Republic of Nauru. The Government Information Office in Nauru says it is in charge of the Twitter account. A spokesperson for the office told Ms Tips that the account was set up “for the dissemination of information for the benefit of the people of Nauru and also to clarify misinformation that is spread about Nauru by those outside of our country”. The email address associated with the Twitter account is a Hotmail account that begins “na*************” (NauruGovernment@hotmail.com fits, but as the rest of the email address is redacted Ms Tips cannot confirm what it is).

“We hope that as well as keeping our people up to date, it will provide an insight into the cultural aspects of our country and also allow people to learn the truth about issues that are being debated in Australia that affect Nauru,” the Government Information Office told Crikey.

Subsequent questions on whether a journalist — who Nauru alleges works for the ABC, but the ABC denies this — caught in Nauru working on a tourist visa had been detained or deported back to Australia were not answered by deadline.

Fancy a drink? In less than a month the people of Ceduna will start the trial of the cashless welfare card, designed to prevent those on the pension from using their payments on alcohol and gambling. As reported by The Australian, the introduction of the card has been controversial in the town, with some locals believing it is necessary and others arguing it contravenes their rights. Local Aboriginal leader Mima Smart was one of the people who signed a memorandum of understanding with the government over the card, but she now says that she doesn’t want anything to do with it. Opponents of the card uploaded this video to YouTube of Smart signing that she no longer agreed to the MOU.

The Australian reported over the weekend that the mayor of Ceduna, Allan Suter, who has long campaigned for a solution to alcohol-fuelled violence in the town, called Minister Alan Tudge and volunteered the town for the program. Tudge declared on his declaration of interests last year that when he visited Ceduna to sign the MOU, he was given a bottle of Penfolds Bin 707 by the local mayor. That hasn’t gone down too well with locals, who point out that gifting alcohol — and a pricey bottle, too — isn’t a good look when the deal is supposed to discourage drinking.

Labor loves/hates voting reform. Some members of the ALP have come out hard against the government’s proposed changes to Senate voting, with shadow cabinet voting to oppose the measures last night, and the issue brought to caucus this morning. Shadow treasurer Chris Bowen told reporters this morning that any deal between the Greens and the government raised “alarm bells”:

“We’ll consider the matter at caucus this morning but when the Liberals and the Greens do a deal to improve Liberal and Green representation in the Senate, presumably so they can do more deals on things like multi-national tax, watering down disclosure, part pensions, etc, then the Labor Party has every right as do the Australian people to be concerned.”

“Now, look, we have had this same system since 1984. The system has worked for us. There is some reform that should happen and can happen but not this reform. This is about excludeing people from participating.”

It’s quite a different message to the ALP’s submission to the Joint Standing Comittee on Electoral Matters from 2014, where optional prefential voting was seen as the “lesser of two evils”: 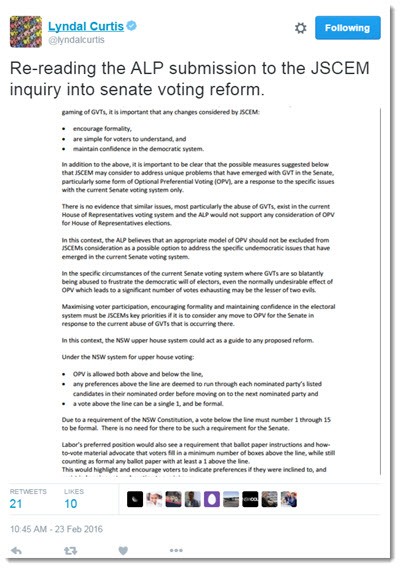 Outgoing Labor MP Gary Gray also wrote in The West Australian two weeks ago that he was in favour of changing the way Senators are elected: 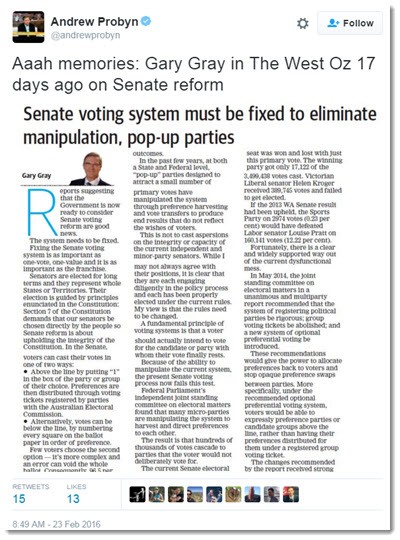 And another thing … Senator Glenn Lazarus has been doing the media rounds this morning also opposing the government’s changes to Senate voting (no surprise there), but he made sure that he could be comortable and presentable at the same time. It’s like the mullet of clothing: business up top, casual on the bottom. 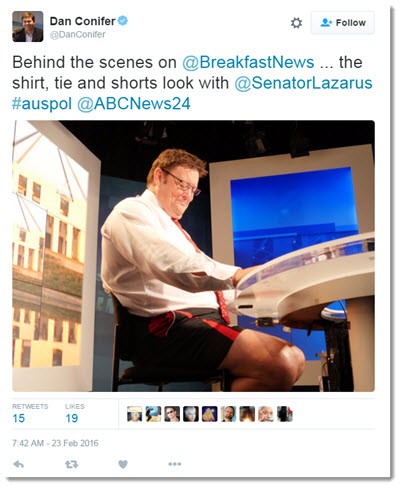 Tips and rumours: Stop The Tweets

Back in the 60/70 (B&W) when Brian Henderson was (one of)TCN’s newsreaders, he also had a gig as an actor in some Tivoli farce, possibly “A Funny Thing Happened on the Wat to the Forum”.
It became a source of shock/horror that he wore his Roman soldier leather skirt beneath the news desk.